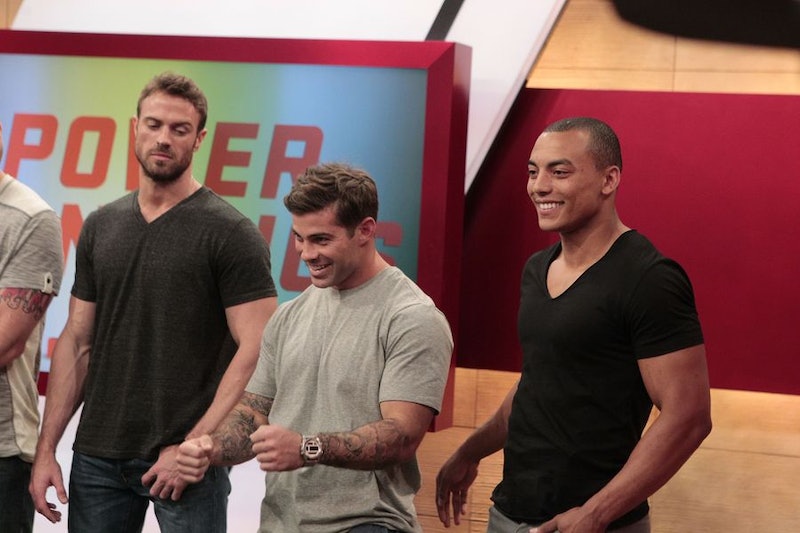 There are a lot of good things that happen because of social media — the dissemination of information, the encouragement of conversation, the creation of memes. But the one bad part about social is the fighting. I don’t know if people get brave behind a screen or what, but damn — the feuding on Twitter is constant. It seems as if two contestants from The Bachelorette Alex Woytkiw and Chad Johnson have taken their on-air fighting to the Internet, and Alex and Chad’s Twitter feud is so immature.

I want to start this off by saying, these are both grown men who are talking about each other on the Internet. If there weren’t much bigger problems in the world than Chad calling Alex short or Chad eating The Bachelorette’s craft services out of all of their lunchmeat, I would say, sure, men, have at it. But fighting on the Internet because of male machismo and pure, unadulterated ego? Oh, spare us. Please. Ever since Alex and Chad have been home from The Bachelorette and the show’s been airing, they’ve been aggressively sub tweeting each other (that one’s mostly Alex) or making fun of everything the other posts (that one's mostly Chad).

Picking a side in this debate is pretty futile, but I think I'm going to have to say that Alex comes off worse here than Chad does. Hear me out — this whole loud, proud, aggressive thing is Chad's schtick. Everyone needs one on a show like The Bachelorette. It's how people stand out. I mean, have you seen Chad's Snapchat? It's just him screaming, working out, and eating frozen pizza. It's a piece of over-the-top comedic genius. Chad knows very much what he's doing, so when he says crappy things about Alex, Alex should just ignore it. Chad wants his Chad fires to be stoked — that's kind of the point. He thrives on it. And when Alex returns with a "jerk store"-esque comment, he looks petty and silly. Chad is being Chad. When the scorpion stung the frog, the frog should have known it was going to happen. That's the scorpion's nature.

The sub tweeting is also annoying to me — Alex watches the episodes of The Bachelorette and adds his own color commentary to it all, but saying that he hates when people tweet and say that they don't care but it shows how much they do care because they're tweeting... isn't that exactly what Alex's tweet proved? Look, I get that it's incredibly easy to want to lash out at a person who is talking about you, but Alex's best bet at this point is to just stop responding. That's what Chad wants — a response. Chad Johnson was the smartest person in The Bachelorette house. He knew how he would be edited if he fine-tuned some of his personality traits, and he went for it. Alex looks like the kid who is trying to prove he's big and tough when all he should really do is walk away.

We get it, guys — you're both strong, you're both tough, and you both served bravely in the armed forces. So maybe you shouldn't fight over petty crap on the Internet. I mean, you're both grown men. Can't we all just get along? You both would look so much better.