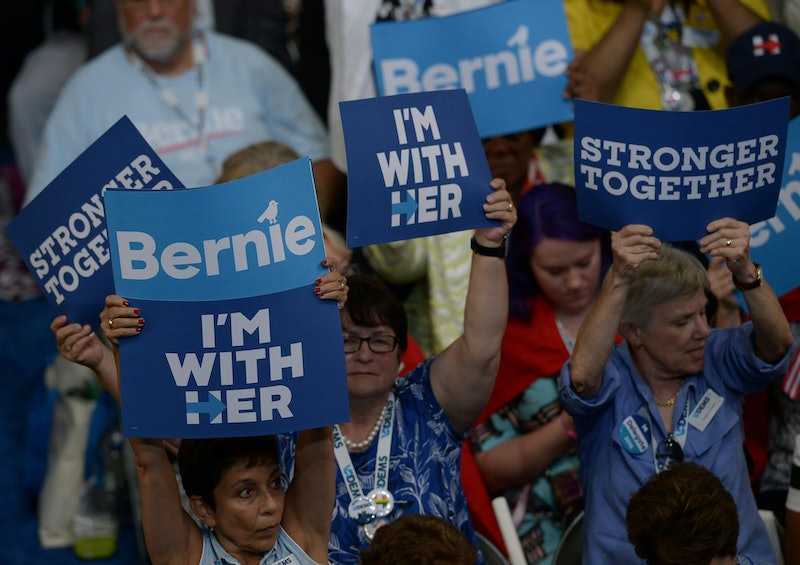 The Democratic National Convention is packed full of audience members and protesters who have very strong opinions. And that's how it's supposed to be. Though the DNC hopes that Democratic voters will unite under the presumptive nominee, it also celebrates the diversity of mindsets, lifestyles, religions, and cultures in America. On Monday, Bustle asked 9 DNC attendees what they'd say to Hillary Clinton if they got the chance to speak with her and no single answer was the same as another.

While some were prepared to unite under the presumptive Democratic nominee, others weren't so certain. Friday's DNC email leak, which alleges the committee favored Clinton over Bernie Sanders, has added fuel to the fire between supporters from each intra-party camp. Even Sanders' own endorsement of Clinton was met with both boos and cheers from the audience, as was that of former Sanders campaign advocate Sarah Silverman. Still, others, such as Michelle Obama, faced overwhelming support suggesting that party unity is certainly possible, even if the current environment is tumultuous. For that vision of unity to become a reality, however, the Clinton campaign has some convincing left to do in the next three days of the convention.

If you couldn't make it to the DNC but are craving a firsthand look, check out Bustle's Snapchat story. Simply add "bustledotcom" to see some behind-the-scenes convention reporting, including how these nine attendees responded to a very important question: What would you say to Hillary Clinton?

She should be in jail.

Hillary, you need to stop fracking and do better things for the environment, the sustainable future.

Do the right thing and concede.

I am going to unapologetically say that I do believe that this entire election is a circus.

Hillary Clinton, how dare you use femininity and womanhood to co-opt your crooked message to take over the country.

What I would like to say to Hillary is thanks for destroying our system and our hope.

Thank you for being an advocate for your entire career for all those who have been left behind who need to get ahead and stay ahead.

What I would say to Hillary Clinton: Start working for the American people and not just for the billionaires and the corporations that pay your pockets and the rest of the government.

If I got to meet Hillary Clinton, I would tell her thank you for having the courage to run and lead our country. Thank you.