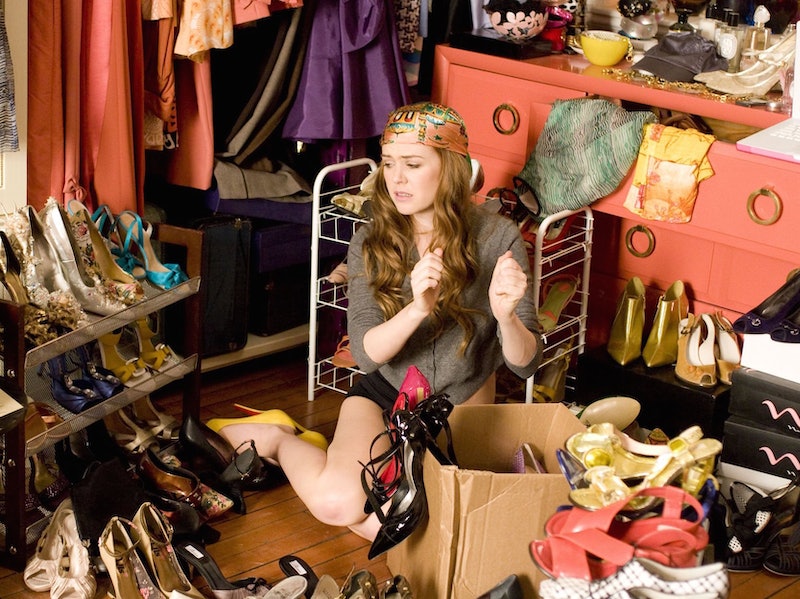 I've got a whole roster of movies I return to again and again, as I'm sure you have too. Alongside the many Jennifer Aniston movies, and romantic comedies starring Kate Hudson, there's a real gem I'm sure you've seen a million times, which you absolutely must return to right now. Released in 2009, Confessions Of A Shopaholic is more relevant now than ever, mostly because of the true evil that is online shopping.

Confessions Of A Shopaholic, based on author Sophie Kinsella's Shopaholic series, stars Isla Fisher as a protagonist with a totally relatable flaw — her character Rebecca Bloomwood loves shopping more than anything else, and she's fallen into a debt crisis as a result. The film is long overdue a sequel in my humble opinion, especially as Rebecca's fatal flaw is so relatable.

She can't resist the way that shopping makes her feel, and, while her addiction may have seemed like a cute romantic comedy character trait when the film came out, it's fast become a warning to us all. The most brilliant part of the plot is when Rebecca manages to land a writing position at a magazine called Successful Savings, a subject she knows literally nothing about. Hilarity ensues, but it's also a timely insight spending culture.

If Confessions Of A Shopaholic has taught me anything, it's that credit cards can be a dangerous game. As Rebecca shows throughout the movie, purchasing products on a credit card almost makes them free, and makes everything appear affordable. Until the bill comes through, that is. There's no need to wait for a pay check to start spending, as credit is available constantly. Even when the credit limit is reached, there are other cards out there, and you can always apply for more. This is one of the main reasons I don't have a credit card right now. I legit couldn't be trusted.

The movie also serves as a reminder that consumerism feels great in the moment — look at all these shiny new purchases — but the feeling quickly fades. When Rebecca's bestie Suze, played by the inimitable Krysten Ritter, goes through her closet, she doesn't even remember buying half of the stuff she owns. That purchase that once seemed vital has gone unworn, and still has all of its labels intact. Meanwhile, that credit card debt isn't going anywhere.

The dashing Hugh Dancy plays Rebecca's boss Luke, and he has a lot to say about money, as you'd expect from the editor of a magazine called Successful Savings. Perhaps, most importantly, Luke comes from wealth but chooses not to flaunt it. His catchphrase, "Cost and worth are very different things," is the central lesson Rebecca learns throughout the movie. After all, her purchases cost her a lot, but aren't worth much to her, particularly as she doesn't even know she has half of them.

My spending habit is nowhere near as bad as Rebecca Bloomwood's, but the advent of online shopping means that spending money is easier than ever. The fact that my Amazon account remembers my card details is great, and saves me loads of time, but it also means that I've 1-Click purchased a zillion different items in the past week that were probably non-essentials. I love spending money, and there's probably nothing wrong with that. But Confessions Of A Shopaholic is a great reminder that shopping isn't the only hobby that makes you feel good, and that you can't hide from your problems forever. It's also possible to look stylish is clothes that don't cost a month's rent money. Probably.

So please, go re-watch Confessions Of A Shopaholic immediately — and not just for a reminder of how fantastic Isla Fisher is in everything. It will help put all those items waiting in your shopping cart in perspective.