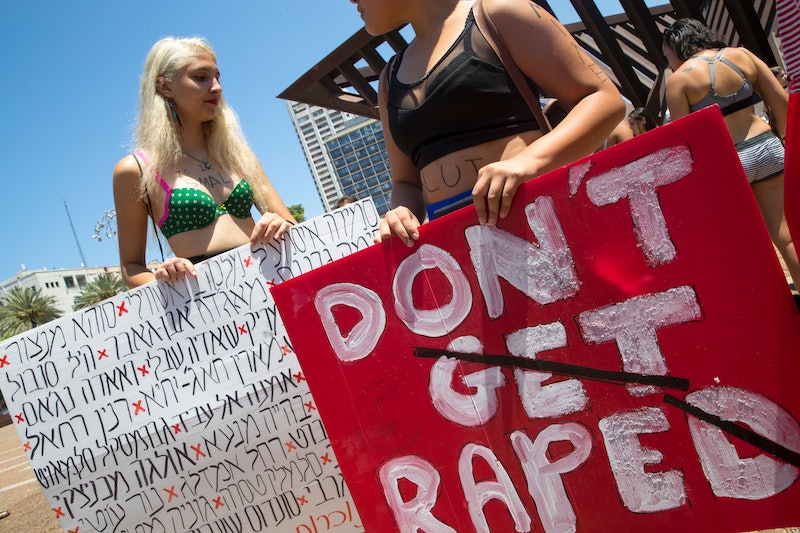 Too often, when somebody reports a sexual assault, the legal process end up defending the accused while blaming the victim. Ontario Court Justice Marvin Zuker's verdict in the Mustafa Ururyar sexual assault case in Canada presents a refreshing break from this status quo; Justice Zuker ruled on Thursday, July 21, that Ururyar was guilty of sexually assaulting fellow doctoral student Mandi Gray, and his powerful statement called attention to the blaming, doubting, and shaming that victims like Gray face. This decision is notable in its sympathy with the victim — but the bottom line is that we shouldn't have to consider a decision that is sympathetic to the victim as being notable in the first place. It is this point which Gray's own statement following the ruling drives home; Gray released the statement on Facebook on July 21, and it is imperative that we view both the case and the ruling with her words in mind.

In his final decision, which was read last Thursday, Justice Zuker addressed the attacks on Gray. “No other crime is looked upon with the degree of blameworthiness, suspicion, and doubt as a rape victim. Victim blaming is unfortunately common and is one of the most significant barriers to justice and offender accountability,” he said. He also addressed several common myths about rape, such as the belief that guys who seem "nice" can't commit it. “We cannot perpetuate the belief that niceness cannot coexist with violence, evil or deviance, and consequently the nice guy must not be guilty of the alleged offense,” he said. Ururyar will be sentenced on Oct. 24.

While his decision is notable, though, we need to reflect on why we consider it notable. In our current climate — both in the United States and in the rest of the world — a ruling that finds someone guilty of sexual assault and calls attention to the unsympathetic way the victim has been portrayed throughout the trial is the exception. But here's the thing: It shouldn't be. It should be the rule. Gray pointed this out in her statement, which begins, "I am tired of people talking to me like I won some sort of rape lottery because the legal system did what it is supposed to." Her experience was not something she should be made to feel grateful for, starting with the fact that she was raped in the first place and extending to her treatment by the police and her cross-examination. The fact that someone who was raped and accused of lying is being told to feel lucky should concern us — and the fact that this is, in fact, the norm should concern us even more.

Gray also pointed out that many other rape victims — especially ones who are not white, heterosexual, and well-educated (which Gray acknowledges she is, and that she therefore experiences certain privileges because of it) — do not even get a trial, let alone a fair verdict. "Since I am acutely aware of sexual assault law, I was able to challenge the detective when he attempted to talk me out of withdrawing my police report by reiterating on numerous occasions that I implied consent by drinking and going to the apartment of the accused," she wrote. "My case is not a demonstration of achieving ‘justice’ or that the legal system is working to meet the needs of the sexually assaulted, or even prevent future sexual assaults."

Justice Zuker's decision is undoubtedly a shining example of how judges and other people of authority within the legal system can and should support victims in the future — but the fact that it is still so rare for this kind of support to happen in the first place means that we shouldn't simply be singing its praises. It may be the exception now, but hopefully, if we hold the legal system to higher standards, it won't be in the future — it will simply be the way things are. Rape survivors should be treated with dignity all the time — period.

More like this
How To Fight For Reproductive Rights, Based On How Much Time You Have
By Courtney Young
23 Abortion Funds In States With Trigger Bans To Donate To
By Emma Carey
10 Times Boris Johnson Got It Wrong On Trans Rights
By El Hunt and Sam Ramsden
LGBT+ Men Fleeing Afghanistan Were Denied Asylum By The Home Office, New Findings Show
By Sam Ramsden
Get Even More From Bustle — Sign Up For The Newsletter