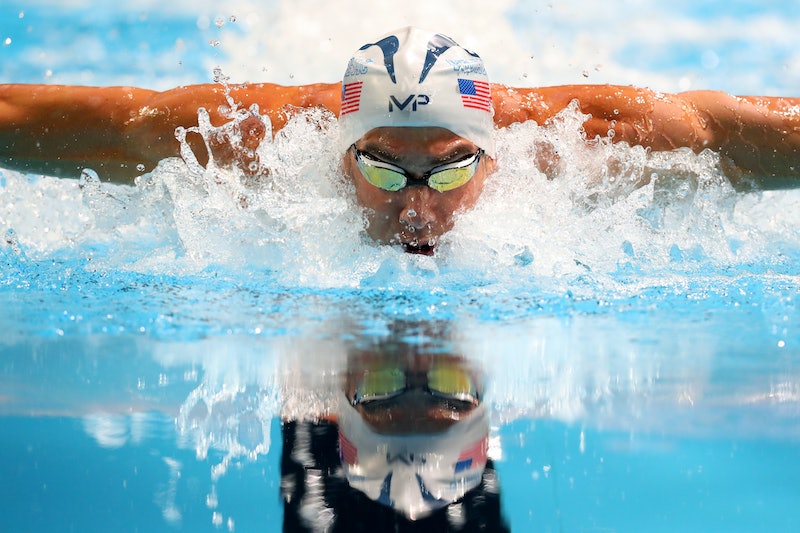 Watching Michael Phelps during the 2008 Beijing Olympics is one of those cultural events that you'll always remember. I don't think I'll ever forget where I was when he swam his way to eight Olympic gold medals. Because of that, you know you're going to watch Michael Phelps swim in the 2016 Rio Olympics. His London showing was slightly less spectacular than Beijing, but strictly just by comparison since he was still the most-awarded athlete of the 2012 Olympics. And while you can't expect the 31-year-old swimmer to be taking home eight gold medals again like he did eight years ago, the person with the most Olympic medals of all time is going to put on one helluva show in Rio de Janeiro.

Considering that Phelps had previously retired, any events that he swims in during the 2016 Olympics are icing on the world sports cake. Plus, his retirement explains why Phelps won't be as omnipresent as he has been in past summer Olympics. Phelps will be swimming in three individual events — the 100m butterfly, the 200m butterfly, and the 200m individual medley — and as of July 27, he could potentially compete in three team relays — the 4x100m medley, the 4x100m freestyle, and the 4x200m freestyle. NBC's Olympics page noted that the decision for Phelps to participate in these team events is left up to the coach and has yet to be decided. However, Phelps has competed in those relays for three out of the four Olympics he has participated in so far — the 2000 Sydney Olympics being the sole exception since he just competed in the individual event of the 200m butterfly at the age of 15 — so there's a good chance that he'll be swimming in more than three events, thanks to those team relays.

Because of the nature of swimming, you'll actually see Phelps on screen multiple times for each race since the heats, semis, and finals for the individual events will all be broadcasted. So, let's get down to the schedule details so that you can plan your Olympics-watching schedule around Phelps — because you know you want to since unlike Phelps, you're only human after all.

Rio is only one hour ahead of the ET time zone in the U.S., so many of the sporting events will be broadcasted live on television. You should note that the NBC Sports Group press release of the Olympics schedule stated that the TV schedule for the Olympics is subject to change, but I'm thinking that Phelps' races will be immune to such shenanigans. But with so much programming for the Olympics being handled by NBC and its affiliates, I have understandably found conflicting times on when exactly you need to tune into your TV to watch Phelps. And, if you've ever watched the Olympics before, you know that the primetime coverage on NBC will feature multiple events until midnight and Phelps might just be in one or two races during that four- to five-hour time block. So, while I have the dates of each race for you, make sure to check your TV schedule for the timing closer to the days of the races since NBC Sports Group noted that more official schedules will be released two days in advance once the Olympics start.

Here's when Phelps is scheduled to swim — even those relays he's not necessarily confirmed to be participating in yet — so that you can get your final Phelps fix on during the Rio Olympics. Note all times are in ET.

Although this is one of those events Phelps might not race in, the finals for the 4x100m freestyle take place on Sunday, Aug. 7 on NBC during the time block of 7 p.m. to midnight.

Phelps will be butterflying his way into your Olympics-loving heart with the 200m butterfly heat scheduled around 12 p.m. on Monday, Aug. 8. The semis will occur later that night — with NBC Sports Group stating the time block will start at 8 p.m. and NBC's schedule stating it will start at 9 p.m. If Phelps makes it to the finals, they will start at 8 p.m. or 9 p.m. on Tuesday, Aug. 9.

The team races only have the finals scheduled to air on television and if Phelps is chosen to race in the 4x200m freestyle, the finals will take place during NBC's primetime block on Tuesday, Aug. 9, which is convenient since you'll already be watching for Phelps' 200m butterfly.

There's no rest for Phelps as the heat for the 200m individual medley is scheduled for the daytime block — most likely starting at 12 p.m. — on Wednesday, Aug. 10. The semis happen later that evening at 8 p.m. or 9 p.m. and the finals are on Thursday, Aug. 11 during NBC's primetime coverage.

Seriously — I'm tired just thinking about Phelps' schedule since the heat for the 100m butterfly is during the day on Thursday, Aug. 11 with the semis that evening. Then celebrate your weekend starting by watching the finals during the night of Friday, Aug. 12.

And just like Phelps' swim times, his time in the spotlight at the Rio Olympics will quickly come to an end. If he's chosen for the 4x100m medley team, you can watch the finals during NBC's primetime coverage on Saturday, Aug. 13.

Phelps competing in his fifth and final Olympics is the end of an era. Make sure you don't miss out when the 2016 Rio Olympics kick off with the opening ceremony on Friday, Aug 5.