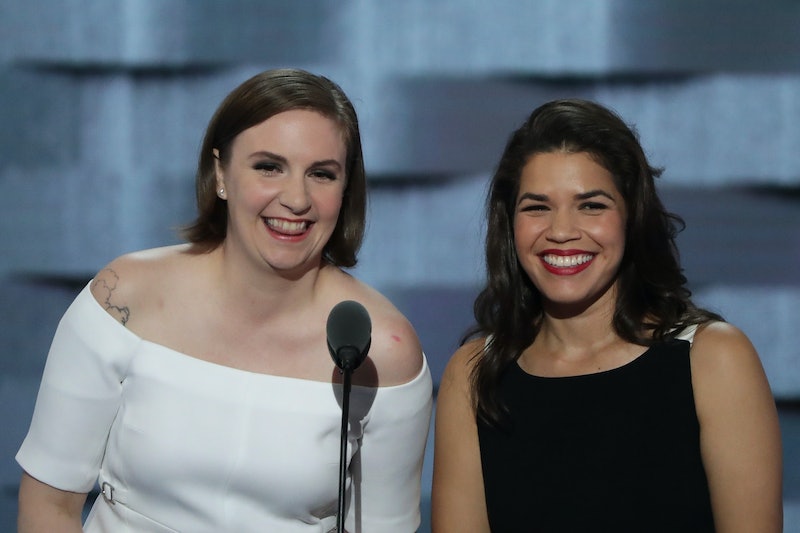 There's no question that July 26 was a historic day. On this day, Hillary Rodham Clinton became the first woman to ever earn the democratic nomination for President of the United States. There to advocate for Clinton amongst her many fans at the Democratic National Convention were two of her most staunch supporters: Lena Dunham and America Ferrera, who gave an amazing speech highlighting not only the importance of Clinton's nomination, but also the importance of women making their voices heard in the world — especially in the face of Republican presidential nominee Donald Trump's campaign, which bears some problematic platforms in regards to women's rights.

"I'm a pro-choice, feminist, sexual assault survivor with a chronic reproductive illness. Donald and his party think I should be punished for exercising my constitutional rights, and his rhetoric about women takes us back to a time when we were meant to be beautiful and silent," Dunham said to the audience at the DNC, which is being held in Philadelphia, Pennsylvania. "Meanwhile, 22 years ago, Hillary declared that women's rights are human rights," she continued, "and she made it possible for my fellow sexual assault survivors in my home state of New York to have access to safe, immediate care in any emergency room. Hillary knows that access and opportunity are the American promise — not transphobia, Islamophobia, xenophobia, and systemic racism. She knows that hatred of all kinds is ours collectively to change, not to ignite for the craven purpose of seeking power."

This is an extremely important statement for a myriad of reasons. Women's voices have so often been stifled in the media, but now, with a presidential nominee who is a woman, it's more important than ever that we take steps to change this. As Dunham said, it's "ours collectively to change," especially in light of this current election, with women's rights at the forefront of the conversation. Less than a 100 years ago, women weren't even allowed to vote — now, to honor all that our ancestors fought for all those decades ago, we need to fight to make equal rights a norm in this country.

It's no secret that Trump's campaign — with its nominee who literally said in an interview in 1994 in response to his then-wife, Marla Maples, working, "And then I have days where if I come home and—you know, I don't want to sound too much like a chauvinist—but when I come home and dinner's not ready, I'll go through the roof, OK?" — is not a step toward making this happen.

"Donald's not making America great again, he's making America hate again. The vast majority of us cannot afford to see his vision of America come to be." Ferrera continued, before Dunham chimed in, "Luckily, we the voters carry the future of this country. We don't accept hatred as the norm in our communities — why would we accept it in the Oval Office?"

Now, more than ever, it's important that we don't. Dunham and Ferrera's words need to be heard, and they need to be absorbed. This is perhaps one of the most important elections most of us will live to see, and like our ancestors who fought for women's suffrage so many years ago, we owe it to future generations to ensure women's voices are not stifled.

More like this
Celebrities & President Biden Are Enraged By The Leaked Roe v. Wade Decision
By Alyssa Lapid
How To Fight For Reproductive Rights, Based On How Much Time You Have
By Courtney Young
LGBT+ Men Fleeing Afghanistan Were Denied Asylum By The Home Office, New Findings Show
By Sam Ramsden
23 Abortion Funds In States With Trigger Bans To Donate To
By Emma Carey
Get Even More From Bustle — Sign Up For The Newsletter