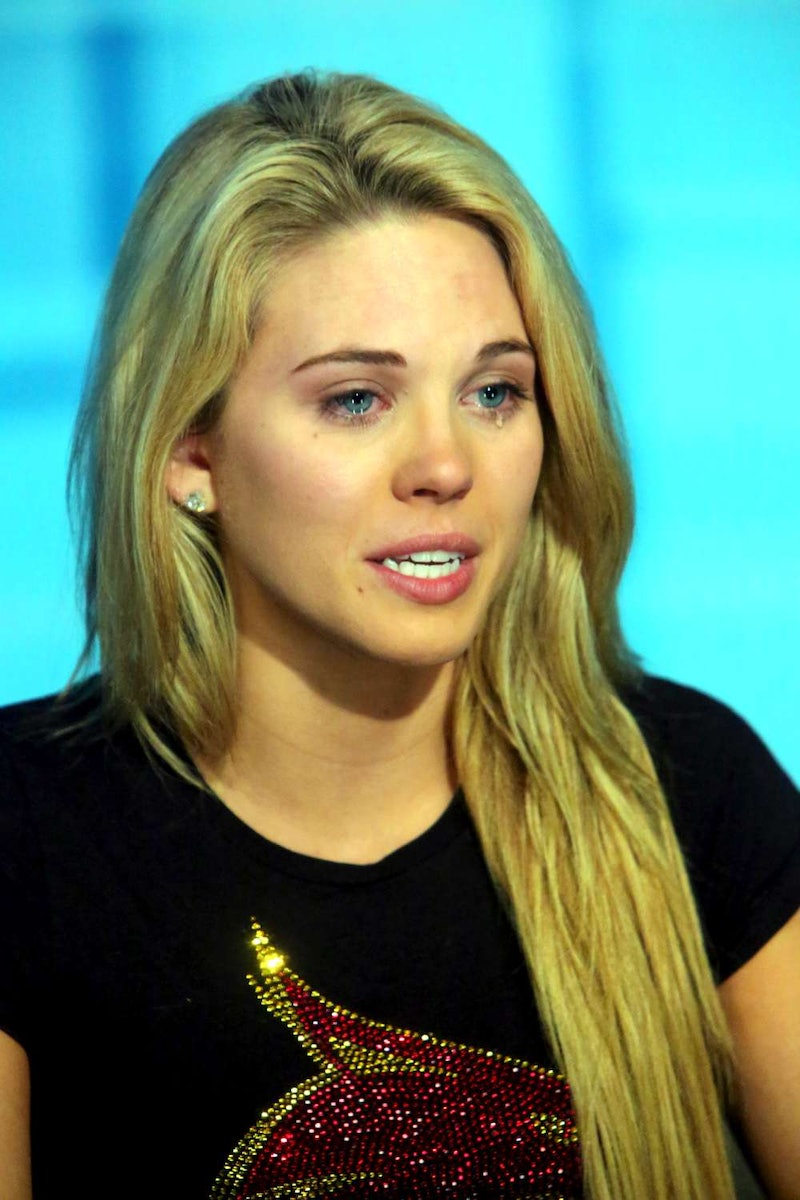 For the first time in the history of Big Brother , CBS opted to run a disclaimer before Sunday night's shocking and unnervingly relevant episode.

The statement read: "Big Brother is a reality show about a group of people who have no privacy 24/7. At times, the Houseguests may reveal prejudices and other beliefs that CBS does not condone. Views or opinions expressed by a Houseguest are those of the individuals speaking and do not represent the views or opinions of CBS. Viewer discretion is advised."

Of course, those prejudices, views, and opinions CBS referred to were the current onslaught of racist, sexist, and homophobic statements that have been running rampant in the BB house and causing an uproar from viewers. CBS wisely chose to address the controversy and show just some of the ugly statements that were being made (primarily from genuinely rotten to the core Aaryn, pictured) last week.

There was no disclaimer or warning during last week's racism montage, so why did they have one for the July 14 episode? It's a pretty safe guess that a lot of it has to do with the verdict in the Trayvon Martin murder trial — which has sent ripples through the country and brought the topic of racism in America back to the forefront with the not guilty verdict granted to George Zimmerman— that prompted CBS to realize that many of Big Brother's viewers would be upset by what they were seeing and hearing.

The moment in question — which already made its rounds on the Internet before Sunday — involved Aaryn (shocker!) taunting her housemate Candice by flipping her bed over and then using a derogatory tone of voice to mock her. GinaMarie — a clearly sane, logical person who spent the better part of an hour sobbing into the shorts of a man she knew for less than it takes a carton of milk to expire — jumped in when Candice got defensive, asking her if "the black" was going to "come out." (You can watch tidbits of the vile, stomach-turning moment here.)

Now, you can't take players like Aaryn and GinaMarie seriously: They are vapid, mean-spirited, hate-fueled people. But you most certainly must take their statements and their actions seriously. There's no place for this kind of thing on television, and there's certainly no place for this in the real world.

When Candice and Howard (the only other African-American player in the house) talked about the overt racism that was being hurled at them and how they must stay strong and let it roll off their backs, it hit a very raw, current, exposed nerve that is reverberating through our country. The timing of this conversation on Big Brother, much like the release of the must-see film Fruitvale Station , are shedding much-needed light on racism and gives us conversation pieces to open a dialogue.

In one deliriously ironic twist, Aaryn and her comrade Kaitlin cry that now that the power has shifted, they are the minorities in the house. Of course, this in no way made them empathize with minorities, because these are bad, bad people. Instead, the only time any light went off in Aaryn's head was when Amanda made it loud and clear that her constant stream of racist comments were going to have consequences outside of this show. (Oh, they most certainly have.)

But, Aaryn wasn't sorry she was a racist or sorry for the pain she's caused her housemates. In fact, she denied she ever said anything offensive (pssssh) and then had the gall to blame her Southern upbringing for her statements being taken the wrong way. Sorry, Aaryn, but you're no "Accidental Racist" — you're the real deal.

Even more appalling, when she realized that Amanda had a point and that everyone would hate her watching from home, she tried out the "I'm sorry you're upset" brand of non-apologies to Candice. In the confessional, she admitted she didn't want Candice thinking she's "that type of person" (read: a raging racist), not because she likes Candice or because she isn't one (because, man, is she ever), but because it will hurt her game play. "I don't want her using that against me."

During any season, this would make a BB viewer's blood boil, but this is beyond your typical reality TV villain arc: This is a horrible, current reality beyond reality TV. Aaryn represents the eye-rolling, sweep-it-under-the-rug bigotry found far too often in this country. Meanwhile, Candice and Howard (and the rest of the show's actual minorities) are the ones that have to put on a brave face while GinaMarie is comforted (by Candice, no less!) about something so unbelievably trivial. Big Brother, much like America, is a house divided and all we can do is watch, wait, and hope that the good side prevails.