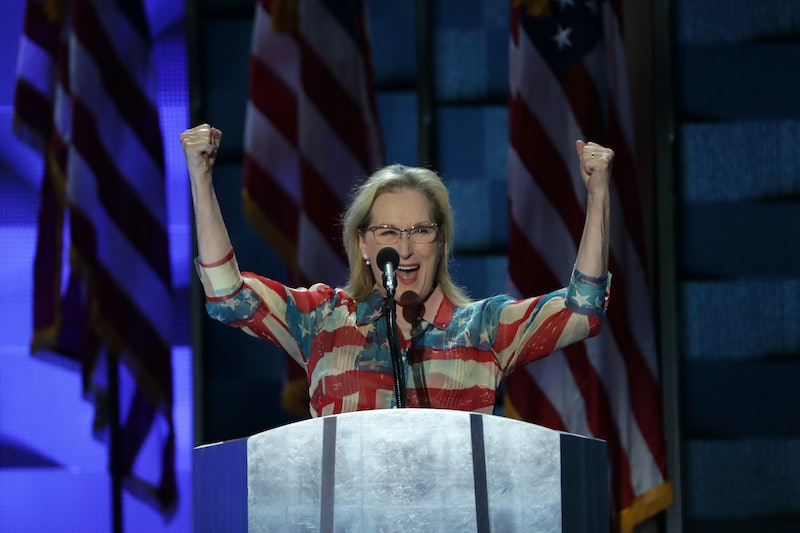 On Tuesday evening, award-winning actress Meryl Streep's flag dress stole the Democratic Convention show — by a long shot. It's safe to say that Streep couldn't have chosen a more perfect time to flaunt her patriotic style. The actress was a Hillary Clinton supporter long before today, when the candidate officially became the first female presidential nominee for a major political party in American history. Now Streep is ready to bring her gusto to the campaign. And this time, she definitely isn't acting.

Streep's energy on stage was electrifying, as she let out a mighty "Woo!" before beginning her address, making it clear that she's ecstatic over the possibility of Clinton becoming the first female president. "We got some fight left in us, don't we?" she asked the audience, already knowing the answer to that question.

What does it take to be the first female anything? It takes grit. And it takes grace.

During her short address, she paid homage to ceiling-shattering women of the past, including Eleanor Roosevelt, Sandra Day O'Connor, Rosa Parks, Amelia Earhart, Sally Ride, Deborah Sampson, Harriet Tubman, Shirley Chisholm, and Madeline Albright. Then, conclusively, she added Clinton to the list. And hopefully, the list won't end there. As she reminded the audience of the history that has yet to be made, her flag print dress conveyed an important message: Today, both men and women are representing America. And both can wave their flags high.

Streep has become something of an expert at bringing special wardrobes to the political scene. In June, she used the annual Shakespeare in the Park Public Theater Gala event at Central Park's Delacorte Theatre to dress up — quite uncannily, may I add — as Donald Trump. Her mockery of the Republican presidential nominee set her political allegiances straight, though audiences should have already been able to guess her political views for years prior.

While introducing Clinton to the Women in the World Summit in March 2012, Streep compared her "acting on stage" to Clinton's being the "real deal" — one of the most flattering compliments she could have offered the politician. After stepping up onto the stage to embrace Streep, Clinton made a clever joke about one of the actress' movies, The Devil Wears Prada:

I’m just glad she didn’t do a movie called The Devil Wears Pantsuits.

If Clinton wins the presidency and runs for reelection, perhaps a pantsuit will be Streep's next fashion statement. Knowing the actress, it'll be something amazingly relevant to the situation at hand. And it won't just be about the fabric or the print; it will be an ode to the power of groundbreaking women.