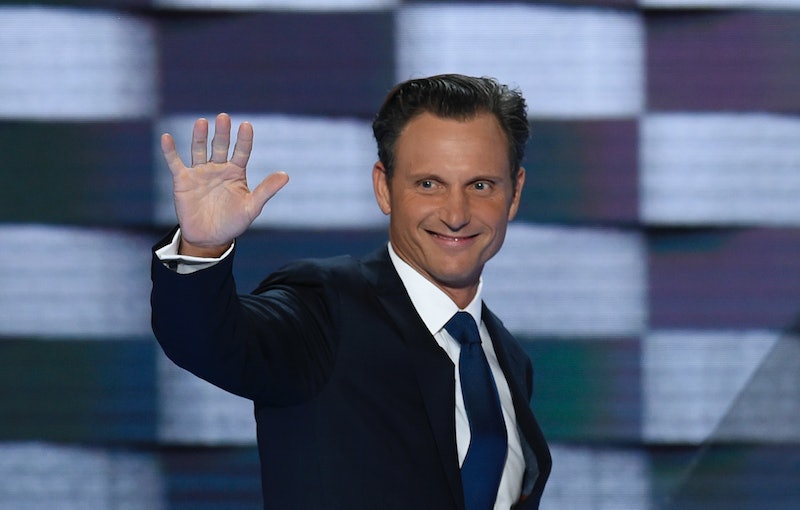 The second day of the Democratic National Convention featured speeches which focused on a very specific theme: "A Lifetime of Fighting for Children and Families." As a testament to that theme, the transcript of Tony Goldwyn's DNC speech introduced some very influential mothers with an important message. The Mothers of the Movement — a group of black women whose children fell victim to police brutality and gun violence — are advocating for racial justice. In his speech, Goldwyn assured the audience that Democratic presidential nominee Hillary Clinton would support that cause if elected president. Other speakers that night included Bill Clinton, Lena Dunham, and America Ferrera.

Goldwyn, who plays President Fitzgerald Grant on Scandal, is a longtime Clinton supporter whose work has been influenced by the Innocence Project, an organization that works to exonerate people who have been wrongfully convicted. While introducing the Mothers of the Movement, Goldwyn said that "we can change the world," and that Clinton draws inspiration from Nelson Mandela. He also cited Clinton's latest campaign slogan, "Stronger Together," as a framework for racial justice work. Goldwyn lauded the activist group for turning "their pain into power and their outrage into action."

Following Goldwyn's speech, the DNC played a video featuring a meeting between the Mothers of the Movement and Clinton before the group took center stage. Goldwyn didn't make it a point to say that Black Lives Matter during his introduction, but convention attendees certainly did as the mothers began to speak, creating a sharp contrast with last week's Republican National Convention.

You can read the full transcript of Goldwyn's speech below:

Hillary Clinton has spoken of watching Nelson Mandela embrace his former jailers because he didn't want to be imprisoned twice, once by steel and concrete, once by anger and bitterness.

I have worked for years with the Innocence Project, the extraordinary organization that fights to exonerate the wrongfully convicted, and you know, I have never heard a single exoneree — many of whom have spent decades in prison for crimes they did not commit — I've never heard them speak of anger or outrage, only of their desire to reform the system so that others might be spared their suffering.

I am proud tonight to introduce a group of women profoundly impacted by injustice and violence, who have turned their pain into power and their outrage into action. They are the Mothers of the Movement. They understand that we must reach out to each other because of our diversity. Because we are stronger together.

You know, Hillary says, "We can't hide from these hard truths about race and justice in America. We have to name them and own them and then change them." That's what she'll do as president.

And the Mothers of the Movement prove that one life at a time, one mother at a time, we can change the world. Thank you.

Though Goldwyn's speech was short and sweet, his message of racial justice will continue to stick throughout the remaining days of the Democratic convention, as will the Mothers of the Movement's lasting influence on the party's dedication to social rights.