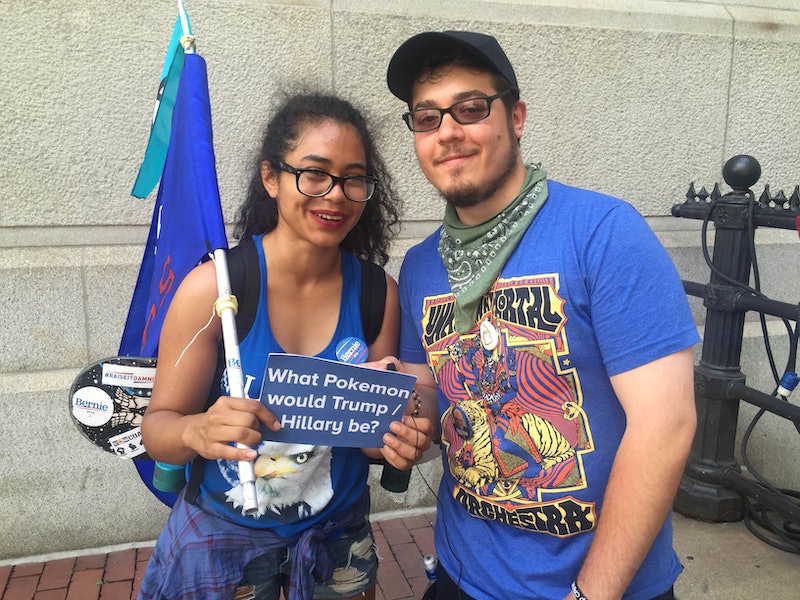 Now that the hit game "Pokemon Go" has basically consumed anyone with access to a smartphone, Pokemon has became a perpetually relevant topic that knows no boundaries. The Democratic National Convention — an event filled with celebrities and high-profile politicians — is no exception to that phenomenon. Meshing Pokemon and politics, Bustle asked 10 DNC attendees which Pokemon Hillary Clinton and Donald Trump would be. To most, Trump was an ominous Pokemon — think Gastly or Koffing. Characterizations of Clinton, however, varied anywhere from Eevee to Ditto.

Trump and Clinton are certainly not out of the loop when it comes to "Pokemon Go." In fact, each began making references to the game during campaign speeches in July. Whether their appeals to the latest fad will help convince voters to flock to the polls for them remains to be seen. But hey, it was definitely worth a try. Clinton even made a clever joke about it during a speech in Annandale, Virginia:

I don’t know who created Pokemon Go, but I’m trying to figure out how we get them to have 'Pokemon Go' to the polls.

Allusions to the popular game continued well into the Republican National Convention, during which Saturday Night Live host Michael Che played a spinoff titled "Trumpemon Go." The goal was to "catch" as many minority RNC attendees as possible. The proven difficulty of the game was a humorous testament to the relative lack of diversity there. Though no spinoffs of the game were created for the DNC, some people watching the event pointed out the otherwise-irrelevant fact that the stage looked like a Pokeball. And people were really excited about it. Clearly, this phenomenon isn't going away anytime soon.

Add Bustle on Snapchat at "bustledotcom" for videos from the DNC and, of course, a sneak peek at which Pokemon people believe the presidential nominees most resemble. Read their responses here.

I think Hillary would probably have to be a Ditto, because she just morphs into whatever. — Stellabotte

And then Trump would be a Gastly. — Rojas

So, I think Hillary Clinton's Pokemon is Eevee. — Luiz

And I believe Donald Trump is Yungoos. — Higgins

Hillary Clinton is Ditto because she changes into whatever people want her to be. — Dean

And Trump is like Koffing because he's toxic. — Rachel

Hillary Clinton will be Magikarp, because she's useless. Trump would be Weezing, because all he does is just cough and be full of hot air.

I think Trump would be Raticate and Hillary would be Koffing.

I think Trump would be Charmander and Hillary would be Eevee.

More like this
Twitter Is In Utter Meltdown After 'Derry Girls’ “Poignant” Finale
By Sam Ramsden
'Heartstopper's Joe Locke Isn’t Here For The Speculation Over Kit Connor’s Sexuality
By Nola Ojomu
Twitter Got *Very* Emotional Over 'The Split’s “Perfect” Finale
By Sam Ramsden
Taylor Swift, Kerry Washington & More Speak Out On Uvalde Mass Shooting
By Jake Viswanath
Get Even More From Bustle — Sign Up For The Newsletter