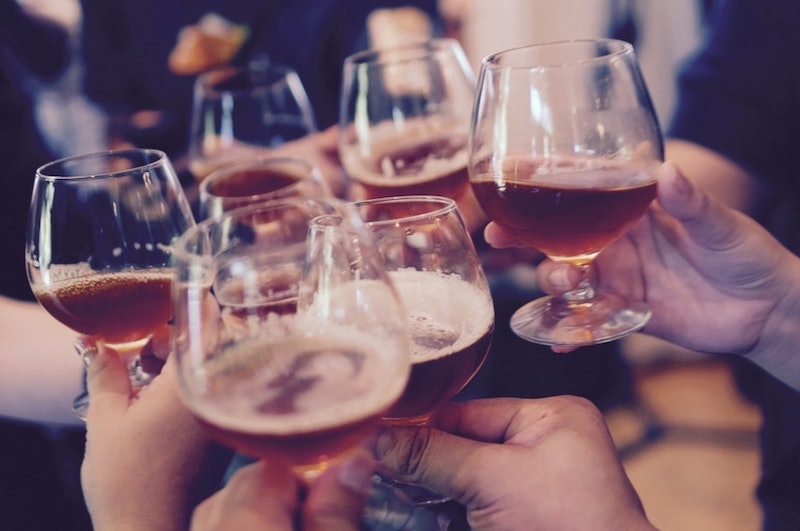 Look at your life. Look at your choices. Are you happy where you are right now, or would you rather have a job drinking beer at the Smithsonian for $64,650 a year? Yeah, that's what I thought. Come closer, friend, and I will tell you of this new job hop-portunity (sorry) that just opened up at the National American History Museum in Washington, DC. They are currently looking for a candidate to fill a three year appointment to travel and drink craft beers all over the country — aka, live the hipster dream and get paid to do it.

But before you get too excited, slow your roll, because not just anybody can fill these fermented shoes. The Smithsonian is essentially looking for a beer scholar. Someone who isn't just good at trying beers (aka, me), but someone who has "proven experience in scholarly research, organizing and conducting oral history interviews, writing for both scholarly and general audiences, and knowledge of material culture and archival materials." Their ideal candidate is someone who has "an advanced degree in American business, brewing, food, cultural, or similar specialization within history."

If that doesn't sound like you, then there is a shred of good news: the deadline isn't until August 10! You've got about two weeks to catch up. Go, go, go!

And hey, props to whoever ends up getting appointed. Not only because the competition is stiffer than the drinks, but because they'll actually be doing some really cool historical research about a cultural phenomenon. Craft breweries contributed $55.7 billion to the U.S. economy and provided over 424,000 jobs in 2014, and makes up approximately 11 percent of the total beer market in this country, despite overwhelming exposure to main brands. Whoever takes this position will have a real opportunity to help showcase that, especially in the framework of the broader American history of beer.

Because, unsurprisingly, beer-drinking is also a phenomenon with a rich history in the U.S. — while the first brewery was established in 1611, the market was all but wiped out by Prohibition in 1919, which subsequently gave rise to a lot of the major beer companies you know and love today once the ban was lifted. It hasn't exactly been an easy go for independent breweries, which is yet another testament to the pluck and defiance of ~America~ — even against the economic odds, we will brew our craft beers, dammit.

And now adding to those 424,000 craft brewing jobs is this Smithsonian one, which is, by all definitions of the word, The Dream. Check out the application here — and hey, Smithsonian, if you need someone to keep an eye of them and make sure they're taking their beer drinking seriously, I VOLUNTEER.