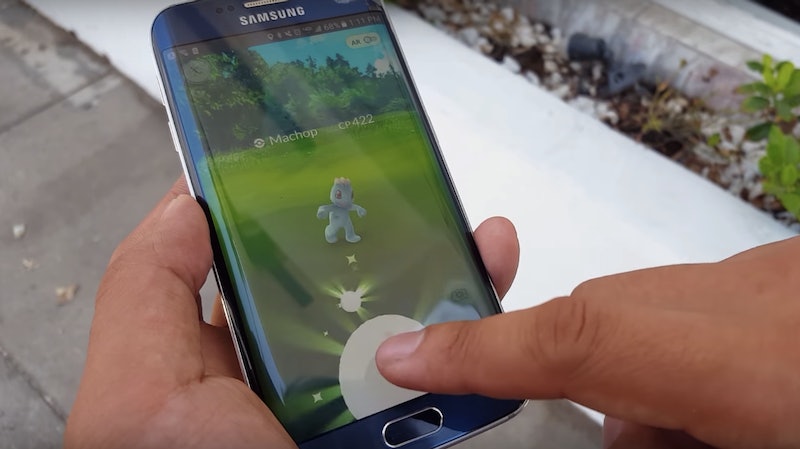 Niantic strived to make all of our childhood dreams come true with the release of the worldwide phenomenon, "Pokemon Go." The augmented reality mobile application game provided fans of the popular card game, television series, and video games with the opportunity to be the very best (like no one ever was). However, as remarkable as the new game may be, Pokémon trainers hoping to catch them all also found some unfortunate realities about both the game and it's relation to the original concept. So of course, the popular YouTube series from Smosh Games had to give us the "Pokemon Go" Honest Trailer we didn't know we needed.

In the three-minute spoof on the game, the ever-so-familiar movie trailer voice takes Pokémon fans through what it means to be a real-life Pokémon trainer. Sort of. With mentions of real world obstacles, the game's technical bugs, and even how you're catching and evolving the Pokémon themselves, the sad reality of never really being able to be Ash Ketchum sets in. Basically, you should watch the full-length Honest Trailer before going into the corner and silently crying your childhood dreams away. Otherwise, laughter may just be the best medicine when the game crashes and there's not a Pokémon in sight.

Here are just a few of the trailer's best jokes.

1. It's Just Not As Magical

I just really wanted to see a Charizard on my front lawn. "Pokemon Go," please create a worldwide holographic version of the game. OK, thanks.

If I knew that this was the case, I would have played a ridiculous amount of Paper Toss as preparation to be the very best.

One of the best parts about playing video games is that you get more than one life. However, car accidents, walking off a cliff, and falling into a lake are very real (and possibly fatal) occurrences when you're out catching Pokémon. Be safe out there, fellow trainers.

4. No One's Actually Looking Up From Their Phones

As much as Niantic tried to entice it's players with PokéStop landmarks and walking to hatch eggs, let's be real here. No one's actually paying attention to their surroundings when playing. In fact, people are barely watching where they're walking.

5. The Pokémon Pop Up In The Most Awkward Places

Wouldn't it be so much cooler if you had to work to find the Pokémon with your camera instead of having it conveniently pop-up right in front of you? Plus, this can be a serious invasion of privacy; Pokémon have appeared in even the strangest of places.

6. Seriously, What Are Pokémon Candies?

If catching and selling Pokémon to the Professor gives you more Pokémon candies to help evolve that specific Pokémon, then are we really feeding Pokémon their friends? Yes, the whole concept of Pokémon has always been pretty messed up, but this is just wrong.

7. The Team Feud Is Real

Based on this Honest Trailer, I don't think I want to even tell you which color team I'm on. If only we knew what we'd be getting ourselves into when we first picked our teams.

If you live in a rural or suburban area, "Pokemon Go" is basically just sadly roaming around catching countless Rattatas and Pidgeys. Meanwhile, based on Ash's journey, wouldn't you expect more Pokémon to be out in the wild than lurking around populated areas like Times Square?

9. Adults Are Ruining The Game

OK, technically I'm an adult and so are numerous other Pokémon trainers playing the game. But we are the cool adults. Listening to someone who knows nothing about Pokémon talk about the game is just plain cringe-worthy.

10. Logging In Is A Nightmare

I don't know what gives me more anxiety: Praying that the Poké Ball will shake three times to assure that I've made the catch or watching the loading bar slowly log me in so that I can even start playing in the first place.

I once left my house to play "Pokemon Go" with a fully charged phone and returned just two hours later with my phone completely dead. The struggle is all too real.

But, despite all of the Pokémon hardships, I'm still up for the challenge of catching them all. I'll see you at the nearest Pokémon gym.

More like this
The 'Hocus Pocus' Sequel Finally Has A Release Date & It Makes Total Sense
By Shannon Barbour and Radhika Menon
Everything To Know About Marvel’s 'Thor: Love And Thunder'
By Grace Wehniainen
9 Honestly Unbelievable Revelations From The WAGatha Christie Trial
By Frances Stewart
10 Eurovision Moments That Celebrate The Weird & Wonderful Camp Extravaganza
By Sam Ramsden
Get Even More From Bustle — Sign Up For The Newsletter