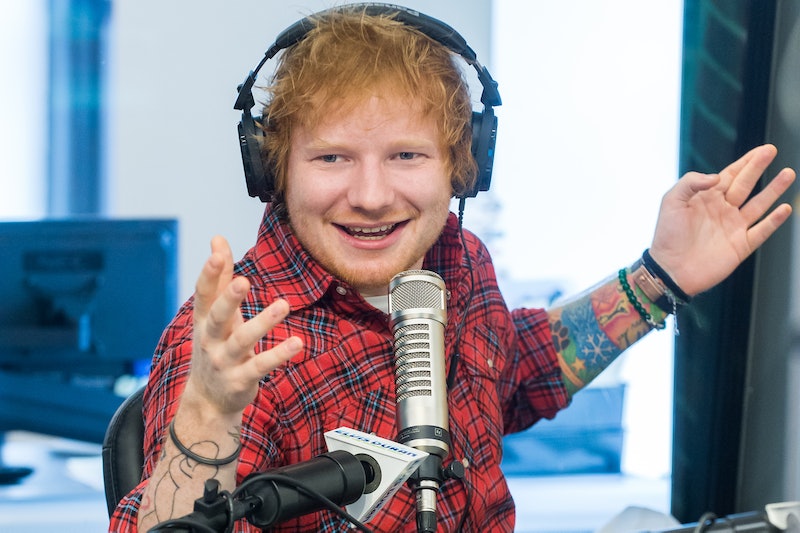 Ed Sheeran has purposely been off the radar in 2016, but he still manages to sneak his way into the pop culture conversation here and there (like over the weekend when I had to interrupt myself during dinner because "Shirtsleeves" came on in the restaurant and I died a little). The ginger-haired singer-songwriter most recently made headlines this week after his friend shared a photo of him at his goddaughter's birthday party, sporting a silver ring on his left ring finger — the international symbol from which all celebrity marriage rumors are born. Of course, this photo immediately prompted just about everyone to wonder if Sheeran had secretly married his girlfriend Cherry Seaborn. Is Ed Sheeran a married man?

Even though the ring (and its placement) certainly ignited the rumor mill — not to mention the fact that Sheeran and Seaborn recently celebrated their one-year anniversary in a fantastically punny, Taylor Swift kinda way — in short, the answer to that is no. Jovel, father of Sheeran's goddaughter Tyler and the man behind the photo, responded as such to a commenter asking that exact question. When asked if Sheeran was married, Jovel replied, "no hun," to the user. So what's up with the ring?

For one, it just seems like it's a piece of jewelry the guy likes to wear. As first pointed out by MTV UK, an eagle-eyed fan on Twitter noticed that the ring is the same one he was wearing on a different finger when Sheeran was in Japan earlier this year. And another thing: It's not as common for English men to wear wedding rings as it is for American men. So even if Sheeran had tied the knot, wearing a ring — or not — is not definitive proof of his marital status, anyway.

Still: Just because Sheeran and Seaborn aren't married (the pair are only in their mid-twenties anyway, so let's just calm down everyone), it doesn't mean they're not blissfully happy. In fact, it seems like they are — reconnecting after meeting in high school (I can't), spending the past year gallivanting around the world, and celebrating their one-year anniversary by sharing a romantic smooch in the company of Taylor Swift and friends.

So let's slow our roll with the marriage rumors — and just let Sheeran and Seaborn enjoy their relationship. K???

More like this
Rihanna Says "I Do" To A$AP Rocky In A New Music Video — With Her Grill
By Jake Viswanath
Is Megan Fox Pregnant? MGK Gave A Shout-Out To Their “Unborn Child” Onstage
By Hugh McIntyre
Harry Styles Opened Up About Olivia Wilde With A Rare Comment About "Trust"
By Sophie McEvoy
Britney Spears Set A Wedding Date With Fiancé Sam Asghari & Previewed Her Dress
By Bustle Editors
Get Even More From Bustle — Sign Up For The Newsletter