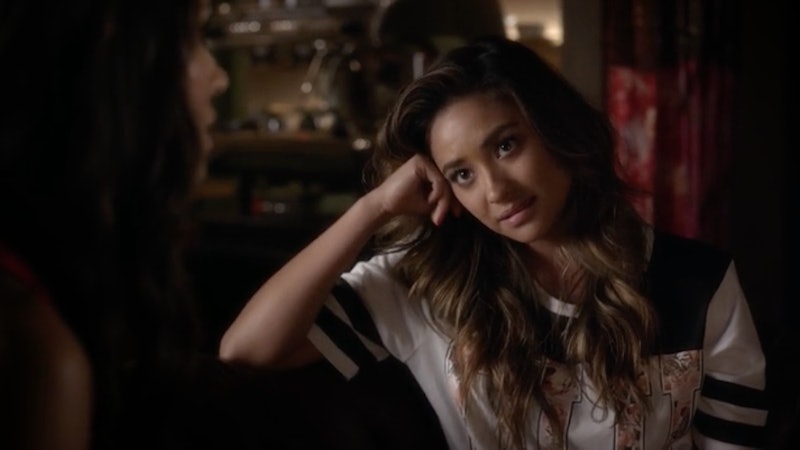 Firstly: everyone remember to breathe. Now remember how, earlier on in Season 6, Emily decided to donate her eggs to save some money? Which seemed a progressive, smart sort of thing to do — why not help women who have trouble conceiving and simultaneously make some dollar? If you were hoping this was just a fun minor storyline promoting a liberal attitude to how women conceive in 2016, nope, no dice. Obviously nothing's that easy in Rosewood and Emily got her eggs snatched. Now I. Marlene King's baby Instagram post is making me think a lot about that one Chekhov dramatic principle. In a letter to playwright Aleksandr Semenovich Lazarev, Chekov wrote "One must not put a loaded rifle on the stage if no one is thinking of firing it." So too with Emily's eggs.

When Pretty Little Liars ' A promptly snatched them and left a note reading "give me the killer or I'll use your eggs," it was a case of so far, so creepy. But then the show just kind of let that storyline trail off... until, maybe now? Maybe the eggs were the loaded weapon all along. I. Marlene King has posted a picture of what looks like a baby (though, admittedly with Pretty Little Liars' history, could be a doll) in an incubator:

Cue all the questions. Since none of the characters are pregnant, this has to either be a flashback (totally possible, Pretty Little Liars loves them), a creepy doll being placed somewhere to freak out the group, or something connected to Emily's egg theft. I'd argue the latter. Realistically, why would the doll be in an incubator? And sure, they could opt for a flashback, but they still haven't tied up the loose end of Emily's eggs, and this is the finale. Pretty Little Liars has never been a show that's been comfortable with its audience getting too comfortable and what would be more profoundly unsettling than the implication that Emily got her eggs fertilized by any of the males connected with A and that out there is a tiny, terrifying A/Emily baby. Just imagine Emily's strength and smarts mixed with A's DNA of pure evil: ugh.

Sure, we're currently assuming A is Mary Drake and Mary Drake only since her conspirator "Elliott" exited in a bloodily dramatic fashion, but what about the show's other significant loose end? Noel Kahn. So far we've never really figured out what Kahn's deal is and why he's suddenly returned. Is he there to be the world's most sinister baby-daddy? And speaking of Pretty Little Liars men we never totally got closure with, what about Wren, with the actor who plays him, Julian Morris, promising us would return?

So there's certainly no lack of vaguely suspect males that could be affiliated with A willing to lend a helping, ahem, hand on this matter. I hope to goodness I'm not right. I hope the baby's from a flashback that gives us an insight into Alison Drake. But something tells me this is going to be the most unsettling ending we'll ever see on Pretty Little Liars.