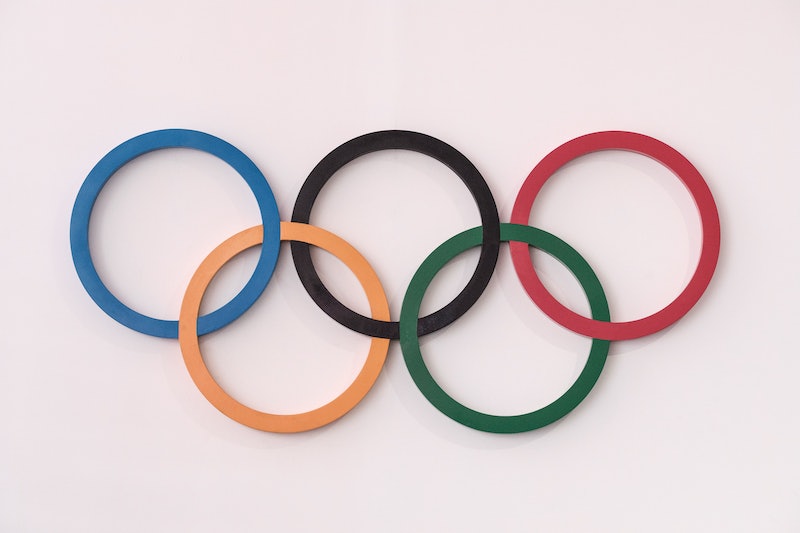 If you've been furiously texting about the upcoming 2016 Summer Olympic Games in Rio, you may have noticed a gaping hole in your preferred method of communication — where is the Olympic rings emoji? You'd be hard-pressed to find someone who doesn't use the beloved cartoon keyboard in some capacity; although emoji have been around since 1998, they exploded in popularity after Unicode standardized the characters in 2010. Last year, an estimated 92 percent of Internet users used the tiny burritos and heart eyes we all know and love, and they decorate our social media posts with such frequency that Instagram started allowing them as hashtags that summer.

Clearly, emoji have become integral to the way we communicate, which is what makes the absence of one represeenting the Olympic rings even more glaring. It may not be as pressing an issue as the lack of a gay pride flag (although that one might be on the way soon) or not-so-diverse characters (which, to their credit, Unicode has worked on fixing over the years), but it's still notable in light of the massive popularity of the Olympics themselves. In 2012, Statista reports that approximately 3.64 billion people tuned in to the games internationally; what's more, over 219 million of these viewers were American. In the weeks leading up to the events and while they're taking place, the Olympics are all anyone can talk about, whether or not you're a fan of sports and intense displays of patriotism. The Olympics are a topic of international discussion, and emoji are a key component of our language these days — so although it seems like a relationship worthy of several praise hands, the absence of the Olympic rings on most emoji keyboards remains conspicuous.

To be fair, there is one way to access the emoji. Earlier this week, WhatsApp quietly introduced the Olympic rings logo in the web, iOS, and Android versions of the app, but so far, the logo is unavailable through the regular iOS or Android keyboards. In fact, according to Emojipedia, it's pretty tricky to use the emoji on an iPhone even if you have the app; the convoluted process requires copying and pasting the sequence into WhatsApp before it shows up,rather than simply being able to select it from the keyboard as usual. So what gives?

The International Olympic Committee (IOC) hasn't publicly commented on the matter — they undoubtedly have other things going on — but it's possible that the lack of an Olympic rings emoji can be traced to stringent licensing regulations. According to Bloomberg, the Olympics has relied on a single worldwide sponsorship program since 1988; although there's certainly no lack of advertising in the games, it can be incredibly difficult for small businesses and individuals to acquire the rights to Olympic logos and symbols. Restaurants have reportedly been asked to change their names, florists have been advised to take down decorations, and a 127-year-old American newspaper was criticized for trademarking its name, The Olympian. According to the Olympics' website, the Olympic rings symbol are "a mark protected around the world and cannot be used without the IOC's prior written consent."

Each iteration of the games brings a new logo, but the Olympic rings are arguably the most recognizable symbol associated with the games. Designed in 1913 by French aristocrat Pierre de Frédy, Baron de Coubertin, the symbol debuted the next year as part of the emblem for the IOC's 20th anniversary celebration. He wrote of the design, "These five rings represent the five parts of the world now won over to Olympism and ready to accept its fertile rivalries. Moreover, the six colours thus combined reproduce those of all the nations without exception."

Furthermore, Unicode's rules for selecting new emoji may eliminate the Olympic rings. According to its rules for emoji submission, "images such as company logos, or those showing company brands as part or all of the image, or images of products strongly associated with a particular brand" are grounds for exclusion. Given how carefully the IOC guards its symbols, Unicode would presumably have to work out an agreement with the organization before it rolled out a universal Olympic rings emoji.

This leaves one last question: How did WhatsApp manage to introduce the symbol? Worth noting is that the app does have a history of creating emoji that aren't supported on other platforms, such as the English flag or the Vulcan salute. According to Emojipedia, the app uses something called a Zero Width Joiner (ZWJ) sequence to create a new character out of several separate characters. Outside the app, they appear as a sequence of emoji, but when displayed in WhatsApp, these characters combine to make a single emoji — in this case, the Olympic rings.

So if you desperately need to express your feelings about the U.S. women's gymnastics team and words aren't getting your point across, your best bet is to use WhatsApp. If that's too much work, though, you'll have to content yourself with all the fabulous new sports emoji that came out last month.