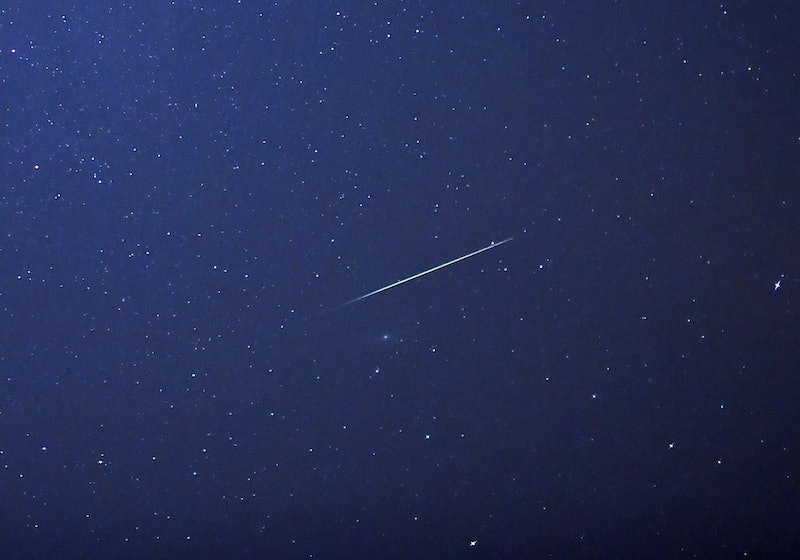 The sky is one of those things that you see every day but that never quite stops being interesting. The latest cool phenomenon going on over our heads is the Delta Aquarids — so what is the Delta Aquarids meteor shower, exactly? And why is it cool? If you've never heard of it before, never fear! I have answers for you.

At it's most basic, the Delta Aquarids meteor shower is, well, a meteor shower, which means that it's made up of small rocks that enter Earth's atmosphere and burn up as they pass through the air, creating streaks of light that can be seen from the ground. The Delta Aquarids shower is caused by debris probably left behind by the Marsden and Kracht comets, which broke apart in space. Every year, Earth passes through the debris field during our orbit around the sun, and we get some really cool lights out of the bargain.

The Delta Aquarids are named for the brightest stars in the Aquarius constellation, the Delta Aquarii, from which the meteors appear to originate when you're looking up from the ground. They happen every year from early July through early August, but the peak nights to see this year's shower are July 28 and 29, 2016.

If you want to catch sight of the lights from the meteor shower, the best time to do so is around 2 to 3 a.m. for all time zones. Under clear conditions away from major sources of light pollution, you can expect to see around 10 to 20 meteors an hour on peak nights around this time. Plus, this year the moon is currently waning and a new moon isn't far off, meaning that you'll have a lovely crescent moon to keep you company while you watch. This means that the Delta Aquarids, which tend to be a little dimmer than other meteor showers, will appear brighter than usual.

Interestingly, the Delta Aquarids this year will overlap with the Perseids meteor shower, which is also happening in August; however, the Perseids shower doesn't peak until later in the month (Aug. 11 and 12, according to estimates from EarthSky.org).

So how can you tell the Delta Aquarids apart from the Perseids? It's all about where they originate. The Delta Aquarids appear as though they come from the Aquarius constellation, so no matter where the meteor is in the sky, tracing the path of the meteor back to its origin will always lead to the same direction — for people in the northern hemisphere, that's the south. The Perseids, meanwhile, originate from the constellation Perseus, which is currently in the northeast for northern hemisphere viewers.

And if you're really lucky — and the night is dark enough that you can see more of the meteors — you might even see meteors from the two showers cross.

Unfortunately for those of us in the northern hemisphere, the Delta Aquarids are best viewed from the southern hemisphere, where they'll appear to shoot directly overhead; however, we can still see them here in the United States if the night is clear enough — and if you aren't in a city with lots of light pollution. The further south you are, though, the better view you'll probably have.

But you also don't need any special equipment to see the meteors. Just pull up a chair and gaze up at the heavens. Because, hey, even if you don't see meteors, it's still one heck of a view.