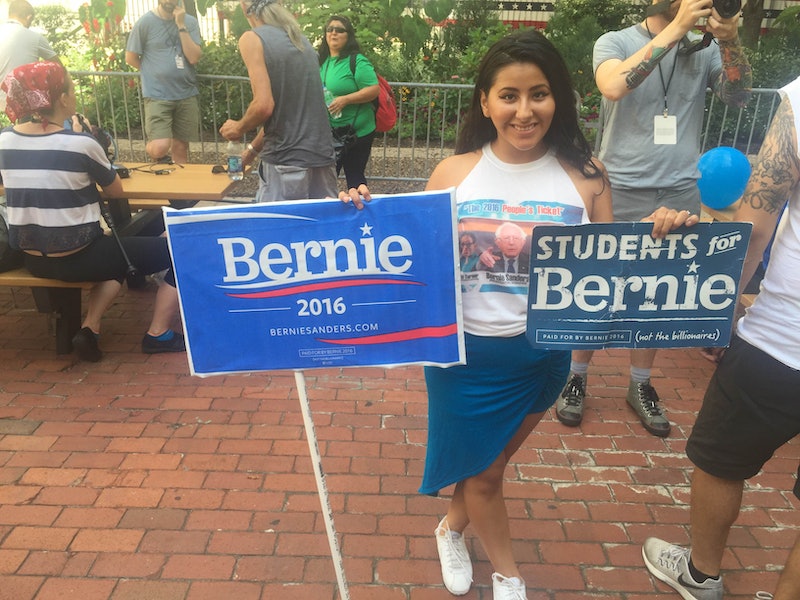 If the RNC was a tragicomedy of badly scripted reality TV, then the DNC so far has been an emotional rollercoaster, particularly for passionate Bernie Sanders supporters. On Tuesday night, history was made: Hillary Clinton became the Democratic Party's nominee for president during roll call, making her the first female nominee of a major political party. While this marks an important and optimistic point in both America's political history and currently charged election, the nomination comes just a few days after the notorious DNC email leak which, if the past few days at the convention are any indication, has called into question the present and future unity of the Democratic Party.

Supporters of Bernie Sanders have long questioned the objectivity of the DNC, and the cache of emails released by Wikileaks has validated their long-held speculations of the DNC favoring Clinton over Sanders. So while Clinton supporters get ready to celebrate and campaign for the presidential vote, Sanders supporters at the DNC expressed doubt over their options: Will it be Hillary Clinton or a third party candidate?

Kari Garcia, 25, wearing a "Nerdie for Bernie" t-shirt, came to the convention from LA and tells Bustle that she will not, repeat not, be supporting Clinton. In the lead-up to the roll call last night, Garcia's support for Bernie wasn't going anywhere. "I feel the way I always have, I still want Bernie," she says, "There's a huge misconception that Bernie Sanders followers are just sheep, and right now, we disagree with him."

Garcia considers herself a Bernie or Bust-er, because she wants to "bust away from the establishment." After news of the email leak, she says she feels that "the Democratic Party hasn't been loyal to us." What that means for her, despite wanting to put in a vote for the first potential women president, is that Garcia's vote will be going to Green Party candidate Jill Stein.

What Garcia does advocate for when it comes to Clinton is the double standard political narrative the Democratic nominee has faced at length, saying that she can't stand sexist comments that are often said about her. "That is something I will defend." But ultimately, she says, "There is no policy of hers that I like more than Bernie's."

A Bloomberg poll released in June found that barely half — 55 percent — of Sanders supporters would be likely to vote for Clinton. According to the poll, the rest, which includes voters like Garcia, are split between voting for Trump (22 percent) and Libertarian Gary Johnson (18 percent).

Dezzi Durazo, 24, is another staunch Bernie supporter. When Bustle asks her if there is one issue Durazo could back Clinton on, she's stumped. "You mean what she stands on now or what she's always stood for? Because she keeps switching so I don't know what she actually stands for," she says, adding, "I don't know if I can genuinely answer that question."

Like Garcia, Durazo will not be supporting Clinton this election.

Like Durazo, Pamela Chinawah, 29, doesn't know if there are any of Clinton's policies she agrees with strongly: "I honestly don't know."

Wearing a Bernie Sanders button, Chinawah's encouragement for Clinton stems from the importance of furthering women's rights, saying, "statistically, women in government will always advocate for women more than men will." Chinawah's willing to bat for other women but she isn't so sure about Clinton's feminism: "I think she does fall short of what I see as a feminist." But unless her state of California swings towards a Trump majority in November, which she sees as unlikely, Chinawah will not be voting for Clinton.

Clinton has often been accused of embracing a limited "white feminism" narrative. Many Sanders supporters have focused on his support for women's rights throughout the years. "She's a very moderate politician, very status quo and she does have some policies I agree with," says Chinawah, "but they're very basic: Women's rights, and the typical Democrat issues." More problematic for Chinawah are the "failures" on Clinton's record that have adversely affected minorities in the country, with Chinawah citing, "her advocacy on the war on the drugs and for welfare reform has done significant damage to black and brown communities and women of color."

Clinton's feminism, Chinawah feels, "doesn't cross paths for people who don't look like her, live like her or make as much money as her."

Holding a "Students for Bernie" sign, Lucia Delaroca, 27, is at the convention to show her support for some of Sanders' most vocal promises, she tells Bustle, which include "free college and debt free tuition." More so, as a millennial voter, the two most important issues for Delaroca are "to get money out of politics and overturn Citizens United because if it continues that way, it will never be a representative government."

Like the other supporters, Delaroca's vote is not going to Clinton. She will, she says, be voting for Jill Stein, despite Sanders publicly and specifically calling on Bernie or Bust supporters to vote for Clinton in his speech at the convention.

The only statement of Clinton's that Delaroca agrees with? "When she says that no politician should be too powerful to jail," she says. "I agree with that."