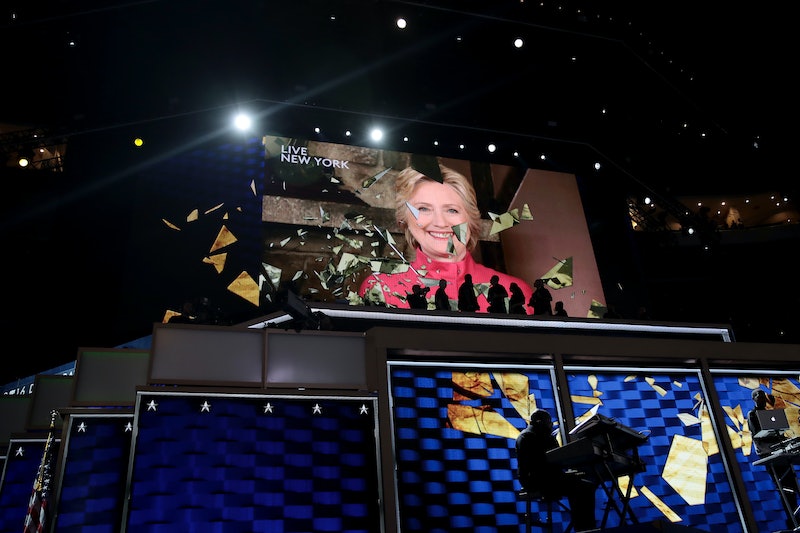 The second night of the Democratic National Convention was filled with star-studded talent, from a performance by Alicia Keys to an impassioned speech from (soon-to-be First Husband) Bill Clinton. But of course, the evening couldn't be truly complete without a little teaser from Hillary Clinton herself — and she delivered. To the surprise of the roaring DNC crowd, Clinton wrapped up the evening's celebration with an unscheduled appearance over satellite. And while Clinton's broadcast from New York was exciting, it leaves viewers wondering: why isn't Clinton actually at the DNC now?

For those who tuned into the doom-and-gloom fest that was the Republican National Convention, it seemed as though Republican nominee Donald Trump was just about everywhere. Trump even introduced his wife Melania before giving her speech (remarks that, consequently, set off the first major controversy of the convention due to true plagiarism allegations).

But like in most things in the former reality television star's life, it looks like his ego probably got the better of him — it actually isn't customary for the candidate to appear at all before accepting their nomination on the final night. So while Trump paraded around the Quicken Loans Arena like he owned the place, Clinton's decision to fly into Philadelphia near the close of the convention isn't out of the ordinary.

And if Clinton's short speech Tuesday night was any indicator, her acceptance speech will be even more phenomenal. In her remarks, Clinton told the crowd:

What an incredible honor that you have given me. And I can't believe we just put the biggest crack in that glass ceiling yet. This is really your victory, this is really your night. ...If there are any little girls out there who stayed up late to watch, let me just say I may become the first woman president but one of you is next.

The candidate is slated to speak Thursday evening, when she will formally accept her party's nomination. The history of that night cannot be overstated — from women earning the right to vote less than 100 years ago to the first woman becoming a presidential nominee, that glass couldn't be getting any weaker.

And Clinton's reference to the glass ceiling is one she will undoubtedly use as a major and much-deserved theme in her nomination speech (there will probably be plenty of young girls that will stay up late to watch that one, too).