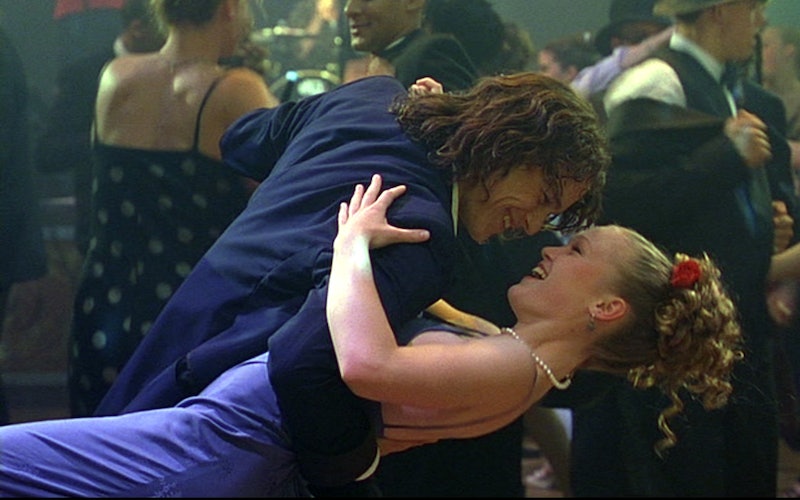 For the most part, the output of the golden age of '90s teen movies is fun and memorable, but not especially empowering. For every Sidney Prescott stamping out serial killers like ants, there is a football girlfriend whose most important scene happens while she's clad in a whipped cream bikini and a "nerdy" girl who is secretly hot, if only she'd take her glasses off. Into that problematic landscape roared Kat Stratford, the Betty Friedan-reading, camo-wearing, introverted sarcasm queen of Padua High School. 10 Things I Hate About You isn't without its flaws in terms of its gender politics; but when looked at as a part of that larger picture, the movie stands out because of its progressive heroine. Kat Stratford and 10 Things I Hate About You should be credited for awakening a generation of feminists.

As you probably know, 10 Things is a loose adaptation of one of William Shakespeare's most troublingly out-of-date plays, The Taming Of The Shrew. It's about a nobleman named Petruchio who uses all manner of oppressive tricks to bring the headstrong Katherina to submission, romantic and otherwise. The "happy ending" is their wedding, and my head nearly exploded when I read it in high school. It's a bold move to update a literary minefield like that for a modern audience, but 10 Things does an admirable job, starting with Kat herself.

10 Things was Julia Stiles' break-out for good reason. Her Kat has a biting wit and a fully armed defensive posture that can't completely hide her love for her family or her general compassion. ("You don't always have to be who they want you to be, you know.") Stiles makes Kat real and accessible without straining too hard to make her "likable." The heroine eventually lets her guard down around her sister, father, and love interest Patrick, but she still doesn't give a damn what the rest of the world thinks of her. And she doesn't compromise her liberal college plans to stick around town and be a girlfriend.

Bustle's own '90s throwback podcast, Be Kind Rewind, talks 10 Things I Hate About You and Kat's feminist legacy in the latest episode. You can click below to listen.

The issues that I have with Kat's story orbit around how she became the prickly, anti-social senior she is during the events of the movie. When she was younger, she was humiliated and betrayed by Joey, the class stud and bully. The implication is that her shame and anger drove her into becoming interested in women's issues, possibly supporting the idiotic theory that female feminists are women who aren't loved up enough to accept second-class status. But from another angle, the story goes like this: a trauma leads Kat to learn more about herself and the world. And her activist mindset doesn't shut off once she gets a nice boyfriend.

In fact, as Kat discovers the inner-strength that allows her to articulate her feelings to the people close to her, they stop asking her to change. Bianca takes her advice about Joey (eventually) and sacrifices some social cred to be true to herself. Kat's overprotective father encourages her to move across the country to go to her dream school. And Patrick's big end-of-movie romantic gesture is to secretly invite Kat's favorite female-fronted rock band to play the Padua prom, a symbol that (in Mark Darcy parlance) he likes her, just as she is.

Yeah, 10 Things I Hate About You is heteronormative. Sure, everyone in it is conventionally beautiful and well-dressed. But for me and probably many women in my generation, watching Kat Stratford verbally obliterate a sexist classmate to her teacher's delight was the beginning of a new era: one where high school norms didn't have to mean much of anything and a girl who had more on her mind than pleasing other people could be the star.

More like this
The First Look At Halle Bailey’s Ariel In ‘The Little Mermaid’ Has Twitter Hyped
By Brad Witter
Women Around The World Are Cutting Their Hair In Solidarity With Mahsa Amini
By Darshita Goyal
15 Offensive AF Jokes In 'Friends' That Really Aren't OK
By Tolly Wright, Bustle Editors and Meguire Hennes
Harry Potter's Viktor Krum Has Undergone A Huge Transformation Since Hogwarts
By Sam Ramsden and Meguire Hennes
Get Even More From Bustle — Sign Up For The Newsletter