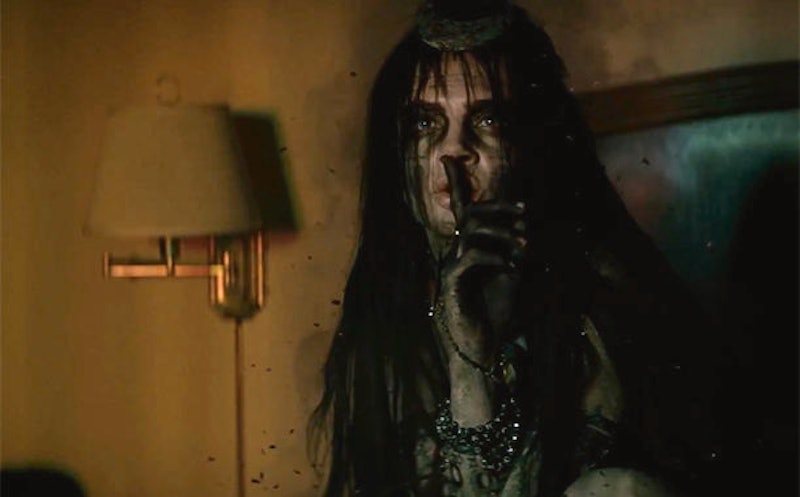 The year of massive superhero movies continues in August, when Suicide Squad hits theaters. In a year that's already seen massive superpowered hits Deadpool, Batman v Superman, and Captain America: Civil War, Suicide Squad just might be the biggest of them all. Anticipation is running extremely high for the film, and that's due in no small part to the enormous and outstanding cast. Jared Leto's Joker, Will Smith's Deadshot, and Margot Robbie's Harley Quinn are receiving most of the attention, but perhaps the most intriguing character in the film is Cara Delevingne's Enchantress. But what powers does Enchantress have in Suicide Squad ?

Simply put, she can do a lot. The movie officially states that the extent of her powers are unknown, but they're certainly vast. Delevingne technically plays two characters in the movie, the first being Dr. June Moon, who after contact with an ancient artifact becomes possessed by the second character, The Enchantress. Dr. Moon is capable of transforming into the Enchantress, who has been around for 6,313 years, simply by saying "Enchantress." As Enchantress, it's believed that Dr. Moon is not fully in control of what she does, and fans are theorizing that Enchantress eventually takes over completely and becomes the villain of the film. As far as her powers are concerned, not much is known about them yet, but she is shown with massive amounts of energy swirling out of her in the trailers, and she is able to teleport across great distances with incredible speed; as seen in the below preview clip.

But even though the film hasn't revealed much of what Enchantress can do, fans can still look to the comics for a better idea. Her powers are magic-based, and there aren't really many limits as to what she can do with them in the comics. She can walk through walls, fly, project and manipulate energy, open portals to other dimensions (and summon creatures from said dimensions), create illusions, and magically manipulate inorganic objects. Her magic is at such a high level that it's allowed her to go toe-to-toe with heroes as powerful as Supergirl.

So despite what little has been revealed about the character's powers in the film, one thing is pretty clear: The Enchantress is much more powerful than any member of the Suicide Squad.