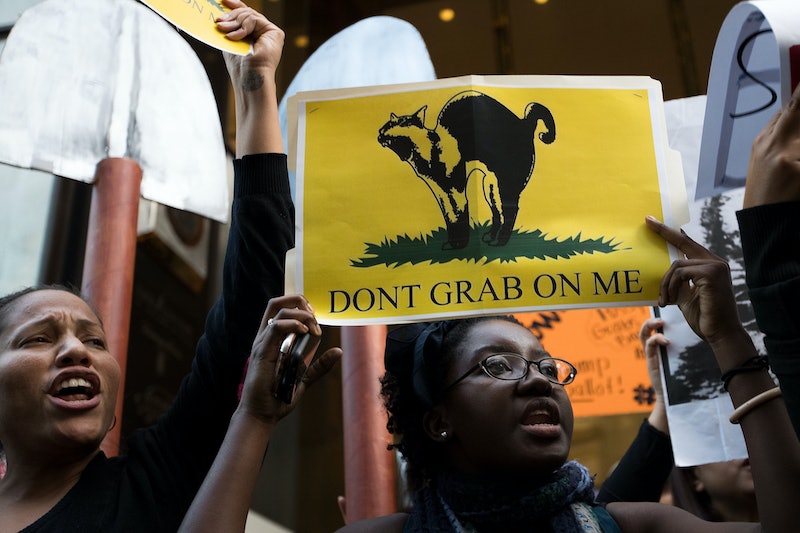 Feminism is often defined by what it does — advocating gender equality, dismantling the patriarchy one chauvinist jerk at a time, and other equally fun activities. But what about the things intersectional feminists don't do? We've all been indoctrinated by the patriarchy in some way, and sometimes, feminism is just as much about refusing to perpetuate gender norms or other culturally-ingrained beliefs as it is to fight their existence in the first place.

Intersectional feminism has become something of a mainstream buzzword over the past few years, but it's actually been around for several decades. The term itself is attributed to law professor Kimberlé Crenshaw, who began writing about the concept of "intersectionality" in the '80s — that is, the idea that each person exists at the intersection of their many identities. She actually coined the term when writing about the obstacles black women faced in discrimination lawsuits at the time; as Crenshaw noted, women of color were often failed by the system because they face racism and sexism.

Since Crenshaw's seminal 1989 essay on the subject, "Mapping the Margins," intersectional feminism has become synonymous with inclusiveness. Much of intersectionality is about acknowledging that everyone's identities affect them in different ways; your ethnicity, sexuality, socioeconomic status, ability, and a range of other characteristics are inextricably tied to the way you exist in the world. Intersectional feminists may be known for what they get done, but there are also a number of things some intersectional feminists tend to avoid doing. Here are five below.

1. They Don't Dismiss Other People

Everyone has a different definition of feminism, but it's safe to say that most intersectional feminists are big on listening to each other's experiences. This is especially true of people whose voices have historically gone unheard, such as women of color or the LGBTQ community.

2. They Don't Drown Each Other Out

In the past, feminism has traditionally been led by white, straight, middle- to upper-class women, with women of other identities shunted off to the side. That's changed in recent decades, but many intersectional feminists emphasize the need to allow diverse voices to be heard — and doing what they can to provide a platform for voices that may otherwise have trouble finding one.

3. They Don't Get Defensive

After decades of existence, mainstream feminism has finally begun to make space for people who would traditionally be excluded from the movement. As a result, many feminist discussions have come to include subjects like racism and homophobia, both of which are notoriously easy to get defensive about if you're part of a privileged group. However, it's important to step back and realize that if you haven't experienced something, you should probably leave the heavy lifting up to people who have.

Because they emphasize overlapping identities, intersectional feminists are known for their involvement in political movements like Black Lives Matter or the fight to protect transgender people. As MTV explained last year, "When we read about social justice movements... they’re often treated as separate, distinct causes. But are they, really? What if you’re an LGBT person of color who makes minimum wage?"

As discussed above, it can be difficult for someone to acknowledge that they're part of a historically oppressive group, but ignoring the existence of privilege just serves to passively perpetuate oppression. Fortunately, intersectional feminism has shined a big ol' spotlight on privilege, making it easier for people in positions of power to recognize what's going on and let other voices be heard.

More like this
Lydia Leonard Is Setting The Record Straight
By Olivia-Anne Cleary
How To Fight For Reproductive Rights, Based On How Much Time You Have
By Courtney Young
10 Times Boris Johnson Got It Wrong On Trans Rights
By El Hunt and Sam Ramsden
The UK's First LGBTQ+ Museum Is Finally Opening
By Sam Ramsden
Get Even More From Bustle — Sign Up For The Newsletter