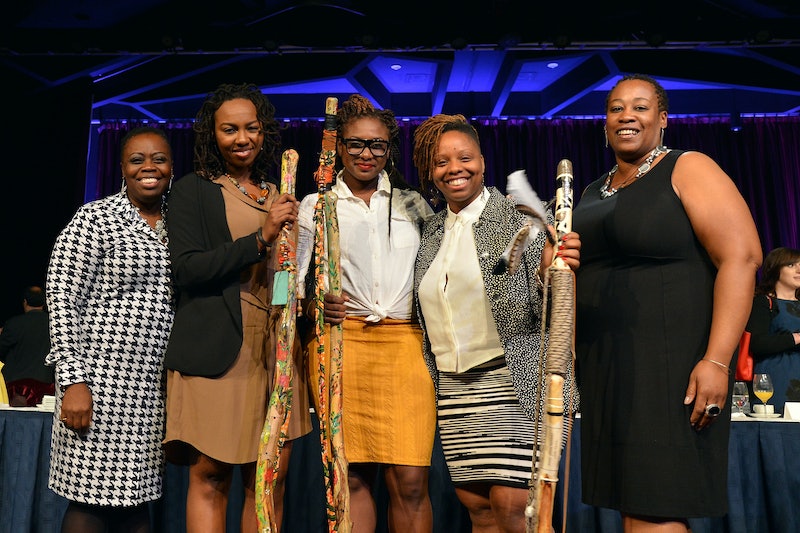 Intersectional feminism is so much more than a buzzword. It's an understanding that different axes of identity — not just gender, but race, ability status, class, and more — are connected, and that these connections in turn inform how structures of oppression operate. But all of this sounds quite academic, whereas more often than not, intersectional feminism is primarily about supporting and including all women and gender non-conforming folks. This means that intersectional feminists not only fight for gender equality, but also for a living wage, access to health care, LGBTQ+ rights, and an end to police brutality and mass incarceration. As a result, intersectional feminists are on the front lines of various movements for political, social, and economic justice, like Black Lives Matter and Fight for $15, and they're also helping people get more involved in challenging the political status quo.

It is so important to acknowledge and celebrate the contributions of intersectional feminists to these movements. They recognize the urgency of fighting for justice and liberation because they live realities in which these struggles are absolutely vital.

Plus, we're just a year away from the 2016 elections now, and the ways in which these feminists are challenging the status quo are pushing candidates to be more inclusive and compassionate in their policy plans. With that in mind, let's take a look at some of the movements that have seen intersectional feminists lead the charge.

Did you know that the Black Lives Matter hashtag-turned-movement was launched by three black women? Patrisse Cullors, Alicia Garza, and Opal Tometi not only work on #BlackLivesMatter — which they founded in the aftermath of Trayvon Martin's death — but on various movements of resistance, and they work hard to amplify marginalized voices, ranging from undocumented immigrants to incarcerated youth. According to a recent Cosmopolitan feature on the BLM movement's origins, Cullors studies the impact of policing and mass incarceration on black communities; Garza's organizing is informed by the intersections of racial, economic, and gender justice; and Tometi works with black immigrants. Tometi in particular spoke to the necessity of having an intersectional movement.

I often think of Audre Lorde and her saying that we don't live and we don't fight for one specific struggle. We live intersectional lives and so I think that this movement has to reflect that. All of who we are, all of our dignity, and all of our brilliance.

Thanks to the ways in which these women have been framing the movement from the beginning, #BlackLivesMatter activists frequently stand in solidarity with other movements for justice, because they recognize how different struggles are linked. BLM organizers have also been challenging politicians to think more intersectionally, and to propose policy platforms that will be more inclusive. Protesters have disrupted presidential town halls and rallies, demanding that presidential candidates #SayHerName — referring to the black women and girls who have been killed by police or found dead in police custody.

It is one thing to talk about intersectionality; it is another entirely to actually practice it. When you are marginalized, you recognize that fighting for multiple causes is not "conflating forms of oppression," but rather a survival mechanism and a demonstration of co-resistance.

Single mothers and women of color would benefit most from an increased minimum wage and overtime pay regulations, according to a study by the Institute for Women’s Policy Research and the advocacy group MomsRising. This should not be surprising: The majority of fast food workers are women, many of whom are working mothers trying to raise enough money to feed their kids while simultaneously facing sexism from their bosses, colleagues, and customers. A recent report from the National Employment Law Project included some jarring statistics about this wage gap.

More than half of African-American workers and close to 60 percent of Latino workers make less than $15.

As millions of activists are aware, it is essential to examine how gender, race, and class intersect in the fight for a living wage. As such, the Fight for $15 movement is, without a doubt, an intersectional feminist issue. Artist and activist Aurielle Marie exemplifies this by living at these intersections — she is a queer single mother of color making the minimum wage, and works in movements like BLM, Fight for $15, and marriage equality. Featured by MTV earlier this year, Marie explained that her survival hinges on a number of factors, from protection from police violence to access to a living wage.

It definitely feels like all one effort. It’s a pretty complex network of conversations, but they all have one central point… there’s a line of continuity between economic disparity, racism, homophobia, and misogyny. It’s easy for me to see all those things working in tandem both statistically and in real life.

In light of the petitions and boycotts that (justifiably) emerged in response to Roland Emmerich's film, Stonewall, now would be a good time to highlight how queer and trans people of color — especially trans women of color — have always been on the front lines of LGBTQ+ justice and resistance. Their contributions to these movements are frequently erased, as many folks pointed out in their critiques of Stonewall, and we need to combat this whitewashing of history. After all, before Pride parades became heavily policed white events, transgender women of color lay the foundation for Pride Month.

And yet, more than 20 trans women of color have been killed in 2015, and this number keeps rising. Pride might generate visibility, but visibility means little if trans people of color keep being disproportionately impacted by violence, homelessness, and poverty. The intersectional nature of this issue is explicit, and feminists and activists involved with other movements, like Black Lives Matter or immigration justice, often speak to this. In public spaces, Laverne Cox and Janet Mock have often addressed the violence faced by trans women of color, but they also acknowledge that the visibility and platforms to which they have access is a privilege.

This shouldn't be the case, but having access to the right and ability to vote is still a pretty radical thing. And even if someone does not face institutional barriers to voting, as many communities of color and people who were formerly incarcerated still do, they still might not have the ability to vote. Not everyone can take off work to head to a voting booth, and yet, Election Day is not a national holiday, which means many people who are frequently marginalized by electoral politics cannot even have their say.

This is why numerous groups that focus on the intersections of race, class, gender, and ability are going out into their communities and enabling people to get out and vote — which is especially important given that even historically, white suffragettes were angry that black men received the right to vote before them, despite the fact that increased rights for one marginalized group advances the causes of other marginalized groups. Asian Americans Advancing Justice, for instance, organizes vote-by-mail and early voting drives to enable more people to get out the vote. And VoterVOX, a technological initiative launched by 18 Million Rising, attempts to help millions of multilingual citizens vote who might otherwise come up against language barriers or intimidation.

Intersectional feminists have and continue to lead such movements because they recognize the importance of the right to vote in sparking political, social, and economic change. Obviously, the right and ability to vote alone are not going to enable marginalized people to revolutionize the political system we currently have, but it is a step in the right direction that makes sure everyone, no matter how they identify themselves, will have a say in American political spaces.

So now you know: Intersectional feminism is not just a phrase that's trending on social media. It is a reflection of the lived experiences of billions of people who are fighting for justice, and who will continue to do so until it is won.

More like this
24 History-Making Black Women You Probably Didn't Learn About In School
By Ayana Lage and JR Thorpe
25 Inspiring Quotes From Black Women To Celebrate Black History Month
By Kyli Rodriguez-Cayro and JR Thorpe
Twitter Is Identifying With Sally Field & Jane Fonda’s Friendship In New Viral Video
By Jake Viswanath
8 Charities To Donate To During Black History Month
By Alexis Morillo
Get Even More From Bustle — Sign Up For The Newsletter
From hair trends to relationship advice, our daily newsletter has everything you need to sound like a person who’s on TikTok, even if you aren’t.