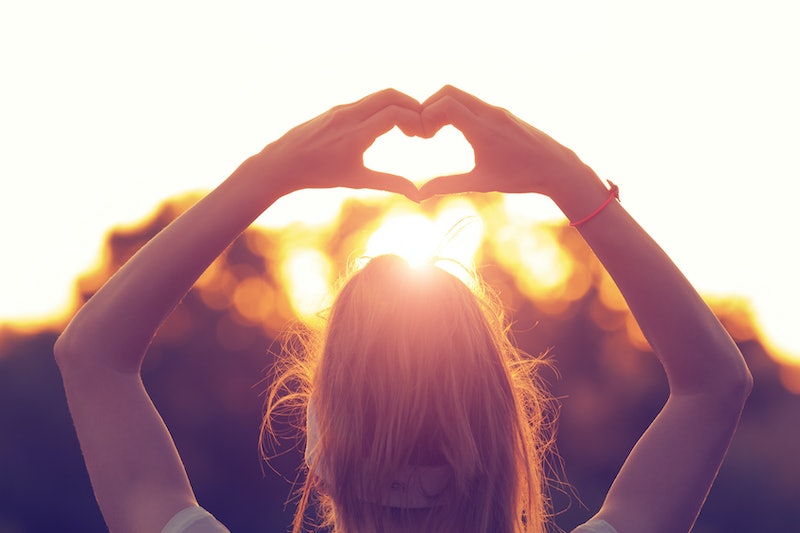 I was 13 the first time I said I loved someone romantically. He was a counselor of mine at theater camp, and he made me feel inspired to say my lines loudly and jump when I danced. I felt certain I was going to marry him. An Ouija board and many online astrology sites confirmed this.

"You don't love him," said my older family members, my friends, and online forums where I publicly confessed my desperation, citing the metaphysical evidence. "Love and infatuation are different," they'd say. "Love is when you've built a life together and take care of each other and are a good influence on each other."

And the fact is, I didn't ever say a word to him. I wouldn't know what to do if we ever found ourselves in conversation. I just wanted to love him from afar — that pure, unadulterated love that doesn't care who the other person is or what they do and, in that way, is unconditional.

Years later, I decided they were right: I needed to be careful about saying "I love you." Then, my junior year of college, I met my first serious boyfriend. After less than a month full of conversations about everything from new age spirituality to Lady Gaga, he told me he loved me, and true to my promise, I didn't say it back... for a week. But soon, I knew I would go to the end of the world to make him happy, and that seems like as good a definition of love as any. Once again, I heard the same things: "You're just infatuated." "It could be because you had sex." And when we broke up, the people who said these things acted vindicated. We continued to say "I love you" after that, though, as friends, and though we're no longer in touch, I still have a lot of love for him.

When I confessed after a month that I loved the next guy I dated, my friends rolled their eyes. When I finally told him, it was six months later, in an unexpected context: "I love you, but more as a friend." We spent a few more months as friends, and by the time we started dating again and became official, we were already saying "I love you" regularly. Even though we broke up three years ago and have both found new relationships since, we still say "I love you" every once in a while.

Some may find it odd to say "I love you" to your exes, but I find it odd not to. If I really love someone, I don't stop loving them. That doesn't mean I'm still in love with them or less in love with any new partner who comes into my life. I want my partners to love their exes, too, because that means they'll always love me.

Over the years, I've expanded my definition of love. I've said it to all kinds of people, from the old man who runs a shop and gives me advice when I come in to the friend I met on vacation and had a heart-to-heart with all night. I think you can love people you've just met, and I think you can love humanity in general. In fact, the more people you can say "I love you" to and mean it, the better.

Now, when I feel even a bit of love for someone, I tell them, no matter who they are or how long we’ve known each other. Life is too short, I've decided, not to tell people you love them.