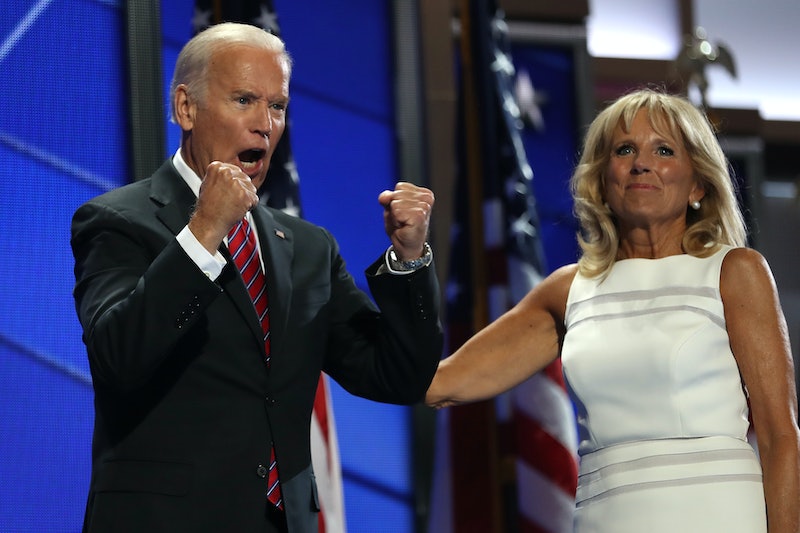 As a leader of the Democratic Party, it's no surprise that Vice President Joe Biden has a few issues with Republican presidential nominee Donald Trump. On Wednesday, Biden's speech at the Democratic National Convention laid out those issues clearly, using one of the Donald's favorite catchphrases against him. It wasn't "Make America Great Again" that irked Biden, but the phrase that ultimately made Trump a famous reality TV star.

Biden returned to his home state of Pennsylvania for this week's convention in Philadelphia. (Although Biden previously represented Delaware in the U.S. Senate, he was born in Scranton, Pennsylvania, about 125 miles north of Philadelphia.) While on stage, Biden kept things mostly lighthearted and jovial as he applauded First Lady Michelle Obama's speech on Monday and his wife's introduction of him on Wednesday. He also gave credit to the woman of the hour, Hillary Clinton, citing his longstanding relationship with her as a public servant. One point where he wasn't so jovial, though, was his discussion of Clinton's opponent, the former Apprentice star himself.

Biden called Trump out of touch with the middle class. In doing so, he pointed out that Trump's claim to fame was the phrase, "You're fired!" Election after election, job creation remains an important issue for American voters — yet Trump found success on the small screen for eliminating people from a potential job. At the very least, it's an interesting juxtaposition.

Biden also criticized Trump's campaign catchphrase. "He has no clue about what makes America great," Biden said. "Actually, he has no clue period."

That was the gist of Biden's speech to the DNC crowd: Clinton has political experience, Trump doesn't; Clinton cares about everyday Americans, Trump doesn't. It mirrored many other speeches throughout the evening, but he didn't hone in on one particular issue, such as gun violence or climate change. Rather, Biden touched on a range of issues, including diplomacy, national security, healthcare, and education.

Not all of Biden's speech was critical. At one point, he made a touching reference to his son Beau, who died last year at the age of 46 from a battle with brain cancer. His death played a major role in Biden's decision not to run for president this year. Beau spoke at both the 2008 and 2012 conventions in support of his father, and Biden clearly missed his son's presence on stage on Wednesday. "You got a glimpse — I know I sound like a dad — but you got a glimpse of what an incredibly fine young man Beau was," Biden said.

That touching moment was quite the contrast to Biden's criticisms of Trump. In both instances, his passion for the message dominated, even if their meanings were quite different. Ultimately, Biden made an interesting case against Trump on an emotional night for his family.