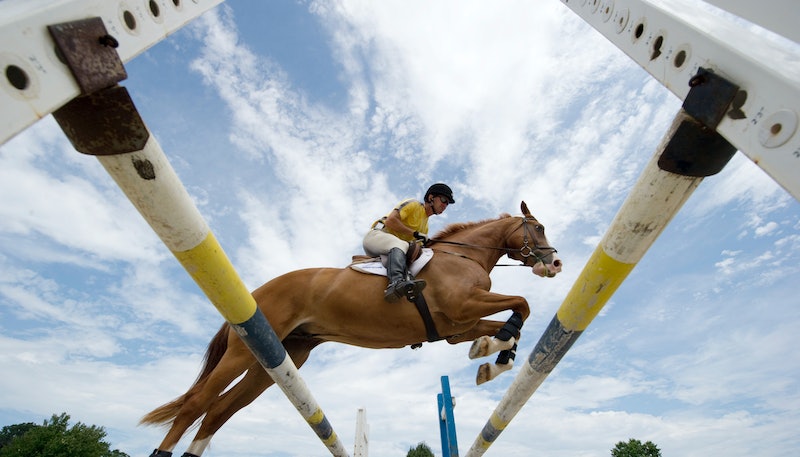 As we gear up for the 2016 Summer Olympics in Rio, all eyes are on the athletes. Like every year, competition is stiff; and we're constantly being introduced to new athletes defying the odds — which, because we humans are a curious bunch, has led many to wonder oldest U.S. Olympic athlete at Rio is. This year, it's equestrian Phillip Dutton, who 52 years old on. Now, 52 is by no means ancient; it's not like athletes who qualify for the Olympics at ages older than 16 have spent years gathering dust in the corner or anything like that. (For the curious, the average age of Team USA athletes is 27). On the contrary, older athletes are often remarkable for the length and breadth of their careers, and Dutton definitely hits the mark here.

Dutton was born in Nyngan, Australia and formerly competed internationally for his home country for 12 years; however, he became a U.S. citizen around 2006 and now competes for the red, white, and blue. And it didn't take him long to start a new collection of medals: His first time competing for the United States, which occurred in 2007, he came in second at the Rolex Kentucky Three Day; later the same year, he won gold for the team and silver for the individual at the Pan American Games.

This is Dutton's sixth Olympic Games — not to mention the fact that he's been chosen to ride in every single Olympic and World Equestrian Games for the last two decades.

Dutton is a two-time gold medalist, but his list of awards and accolades doesn't end there. He won the USEA Leading Rider of the Year title in 1998, and every year from 2000 to 2006. And this is still practically scratching the surface — it's nearly impossible to sum up this Olympic athlete's impressive accomplishments in a single article.

Dutton lives in Pennsylvania with his wife, Evie, and three kids. They also have a farm — True Prospect Farm — perfect for training for the three-day event. They care for horses while also offering coaching. Dutton personally offers training for numerous riders every season, from beginners to higher-level professionals.

It goes without saying that maintaining a career of Dutton's caliber is no small task. It's not just the level he's reached — it's the longevity. The dedication, motivation, and perseverance it takes to win medals year after year is certainly something to be proud of. My hat is off to you, Phillip Dutton!