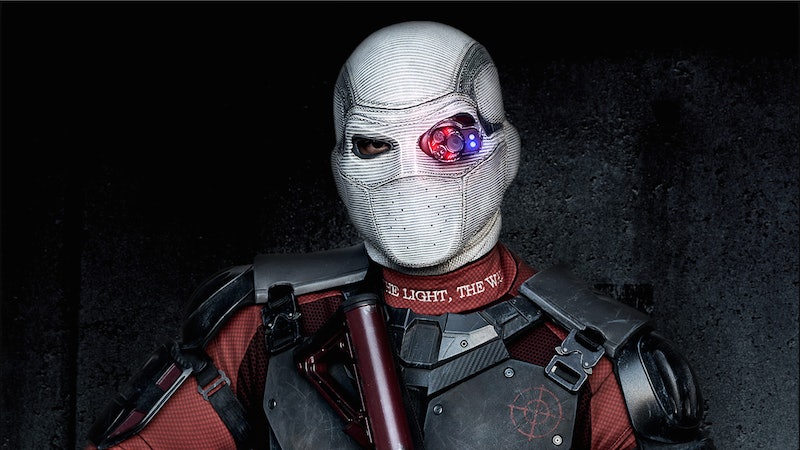 Between his music, films, and gorgeous family, Will Smith seems to have actual superpowers. The bonafide superstar has been in the entertainment biz for almost 30 years and doesn't seem to sleep — he hosts awards shows, campaigns on behalf of presidential candidates, and still finds time to star in movies like the upcoming Suicide Squad. Like Smith, the actor's character in Suicide Squad, Deadshot, doesn't possess a supernatural power. Instead, Deadshot's powers in Suicide Squad are a bit more believable and rooted in military training.

In the new film, out Aug. 5, Amanda Waller puts together a ragtag group of DC villains and installs Deadshot as their leader. It's a choice that makes a lot of sense — Deadshot is a professional assassin with a knack for sharpshooting, precision, and cold-blooded killing. Creepy, right? Like many villains, Deadshot's gift for violence arose from a tragic event and complicates the character's story, even as the "good guys" in Suicide Squad write him off as a criminal and send him on deadly missions. With this in mind, Deadshot's power as a marksman and assassin will probably play a major role in the new movie and give Smith ample opportunity to stretch the bad guy muscles he doesn't typically use.

According to the DC canon, Deadshot, aka Floyd Lawton, is the child of abusive parents. When he was a teenager, Lawton's mother coerced him into shooting his father, but he missed when taking his shot and wound up killing his brother. "Swearing that he would never again miss a shot, he began training as a sharpshooter," Comic Vine reported. "As an adult he joined the Marines and spent some time with the League of Assassins before seeking independent employment as a mercenary and assassin." He eventually landed in the Belle Reve asylum after trying to take down a senator and being stopped by Batman. In the comics, this is where he meets his Suicide Squad comrades.

Ultimately, Deadshot doesn't have a superpower, but he is a formidable opponent for the Dark Knight. So formidable, in fact, that the rumor mill is predicting Deadshot's return as a major character in DC's upcoming solo Batman movie. "But before anyone assumes that Batman will be charged with stopping Lawton from completing a job," ScreenRant wrote, "the same sources claim Affleck and Smith will be thrown together in a The Good, The Bad and The Ugly scenario.”

Bad guy turned good, anyone? Sounds like Deadshot could get to use his power to redeem himself as the franchise continues.