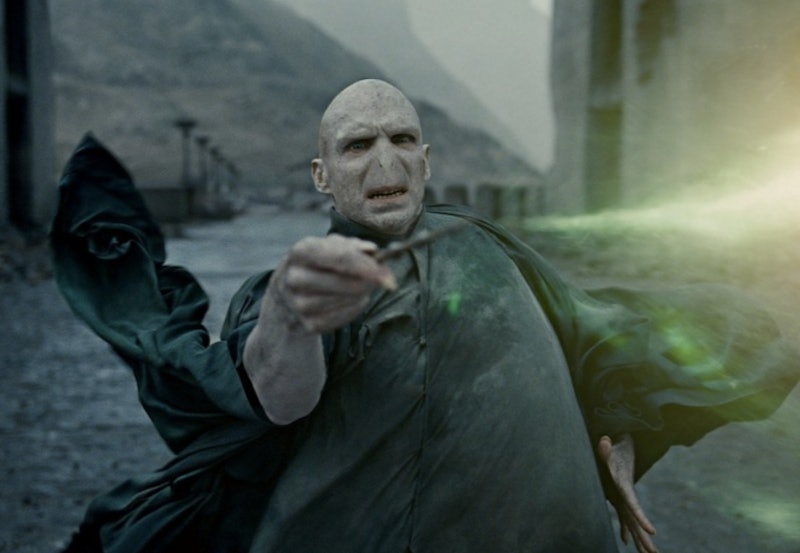 Now that Harry Potter And The Cursed Child is finally on in London's West End, spoilers are literally everywhere, and it's extremely difficult not to accidentally find out what happens in the new play. So let this be your warning — spoilers lie ahead. If you've managed to get a ticket to the two-part play, you're probably over the moon and can't wait to see for yourself what's happened to Harry and his friends. If, like me, you weren't so lucky in scoring a ticket, or live way too far away from England's capital to go and see it, you probably don't mind reading a few spoilers from the book and finding out what happens next in everyone's favorite series. One of the most curious spoilers seems to be that some characters in the play believe that Voldemort is Scorpius's father. Why do people think that exactly?

In Harry Potter And The Cursed Child, Time-Turners are responsible for a lot of things. And, for some reason, when Draco Malfoy's son goes to Hogwarts, he's bullied for a very strange reason. According to rumors, people seem to believe that Voldemort is Scorpius Malfoy's dad. And the reason they think this is simple — it's believed that the Malfoys used a Time-Turner to go back so that Voldemort could impregnate Draco Malfoy's wife, which resulted in the birth of Scorpius. It's so obvious, right?

Not only is this a strange rumor to be spread by school children, it's a bizarre thing for anyone to think. Why doesn't anyone seem to believe that Draco Malfoy is Scorpius's father? Well, according to the boy himself,

The rumor is that my parents couldn't have children. That my father and my grandfather were so desperate for a powerful heir, to prevent the end of the Malfoy line, that they... that they used a Time-Turner to send my mother back [so that Voldemort could impregnate her].

Yeesh. Although Rose doesn't put any stock in the rumor, even joking, "Look, you've got a nose," it still makes people even more uncomfortable around Scorpius than they would be otherwise. The rumors get so serious that Draco basically begs for his friends to deny that there's any truth in them. Hell, he even asks Harry to help him get the Ministry to release an official statement to confirm that all Time-Turners were destroyed during the Battle at the Department of Mysteries. "My son is suffering," he says to his former enemy. Father of the year, right there.

Clearly, the rumors cause a huge problem for Draco and his son Scorpius, as he demands that everyone set the record straight on his behalf. But could there be any truth in them?

It seems that the very existence of Time-Turners is what started the rumors that Voldemort could have impregnated Draco Malfoy's wife, since no one appears to believe they could all be gone. There seems to be little reasoning other than the fact that Voldemort had the power and the means to sow his wild oats, so to speak, if only they could get Astoria to him. Not to mention there was all that mystery surrounding Scorpius birth, Draco sites as the reason that he blames himself for this rumor getting started,

[Scorpius' birth] was the best day of both our lives, although it weakened Astoria considerably. We hid ourselves away, the three of us. I wanted to conserve her strength... and so the rumors started... I never realized, though, that by hiding him away from this gossiping, judgmental world, I ensured that my son would emerge surrounded in worse suspicion than I ever endured.

It's pretty brutal that kids spread a rumor that an evil being such as Voldemort was responsible for someone's birth. As high school bullying goes, it's extremely mean — and gives us even more of a reason to sympathize with Scorpius.

More like this
10 Must-Read New Books Out This Week
By K.W. Colyard
'Bridgerton' Star Nicola Coughlan Confirms Season 3 Will Focus On Colin & Penelope
By Grace Wehniainen and Alyssa Lapid
Candice Carty-Williams’ 'People Person' Tackles Daddy Issues With Warmth
By Sam Rogers
'Derry Girls’ Dylan Llewellyn Will Star In C4’s New Queer Comedy
By Rachel Mantock
Get Even More From Bustle — Sign Up For The Newsletter