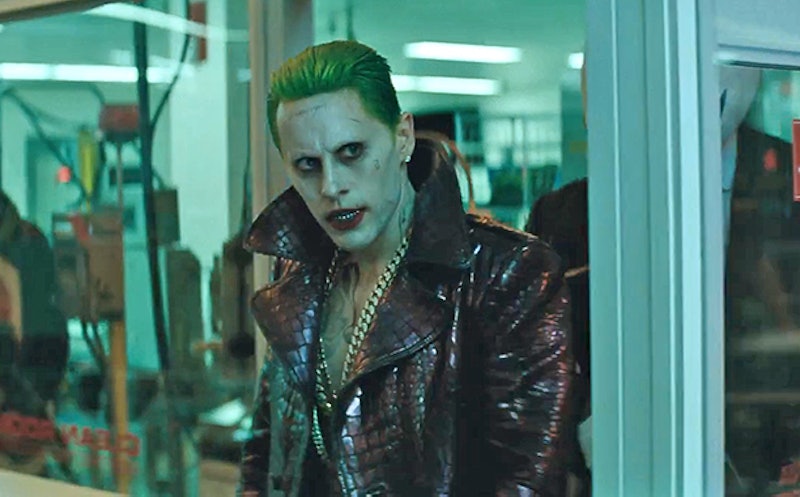 Suicide Squad isn't just out to save the world, it might also save the movie industry's summer. In a season that has been filled with underperforming would-be blockbusters like The Legend of Tarzan, Ghostbusters, and Independence Day: Resurgence, the supervillain team-up looks like a sure thing. The film is tracking to score an opening weekend of $125 million — which if it holds would equal the combined opening weekends of the three previous films I mentioned. So a lot of people are going to see this movie in the theater, but what if you're a little scared to do so? Should you be worried that Suicide Squad is scary?

Superhero movies aren't generally considered to be very scary, but Suicide Squad does contain darker elements than most other films in the genre. The film is rated PG-13, so there certainly won't be any R-rated horror, but plenty of PG-13 movies are capable of conjuring scares. Just watch The Others, The Ring, or The Sixth Sense if you don't believe me. So there's definitely some potential for scares, and apparently one of the most terrifying aspects of the film is going to be Batman, who's seen in a different light in the movie than ever before. The film's director, David Ayer, told Adam Chitwood of Collider:

"All the Batman movies have been from Batman’s point of view. He’s the good guy. He’s the hero of his own movie in all the movies we’ve seen. If you look at what Bruce Wayne has done in creating the Batman persona, his idea was to terrorize criminals. It’s sort of psychological warfare against criminals. This wraith that comes in the night and attacks and pulls criminals from society. For the first time, we’re seeing Batman from the point of view of the criminals and he’s freaking scary."

If the idea of a "freaking scary" Batman doesn't frighten you, then odds are Jared Leto's Joker will. The actor has already received a lot of buzz for his terrifying portrayal of the psychopath, and stories are constantly leaking out from his cast mates who admit to being afraid of Leto during filming, since his method acting kept him in the role even when the cameras stopped rolling. Ayer told Brian Truitt of USA Today that everyone on set "kept their distance" from Leto during filming, and when asked if Leto's performance scared him at all, the director said, "Big time. The hairs stand up on the back of your neck."

But the end of the day, this isn't a horror movie. It's a PG-13 superhero movie; an action blockbuster that's meant for a wide audience. Even though Batman may have a creepy cameo and Jared Leto's Joker might prove disturbing, I don't think their presence is enough to label this film as being scary. So go ahead and see it in the theater with everyone else in the country. You'll survive. Probably.