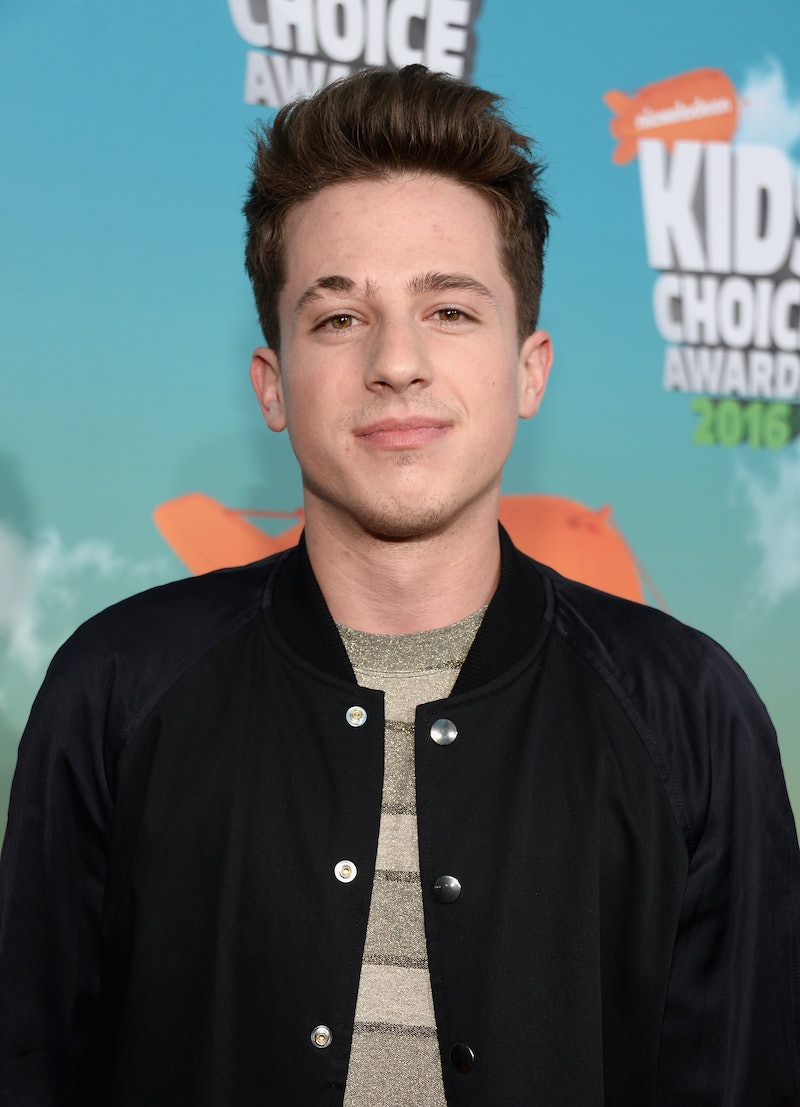 Sometimes it's hard to keep up with the love lives of celebrities, which is why I'm going to lay out exactly who Charlie Puth has dated. The "One Call Away" singer has been linked to several famous women, who also all happen to be singers. Either Puth really connects to someone else who is in the same line of work as himself, or it's just a happy accident that he's been rumored to be dating some pretty big talents in the music industry.

First up, there is Pitch Perfect 2 star Hailee Steinfeld. In 2015, the two made headlines as a possible couple. They hung out the night of the American Music Awards and many read into some of their Twitter exchanges as proof of the two dating. However, in a December 2015 interview with Entertainment Tonight, Steinfeld set the record straight. After being asked if there was anything going on between them, the Oscar nominee said, "No, what makes you think that?" She added, "No, I tweeted him happy birthday. He's a good friend. I'm a huge fan. I think he's so incredibly talented."

It seems like things between them were and are pretty innocent, but that doesn't mean they couldn't end up dating in the future. As of right now, they appear to be just friends.

Next, there is Meghan Trainor, who is featured in Puth's song, "Marvin Gaye." At the 2015 American Music Awards, Trainor and Puth kissed on stage and it just wasn't any old kiss. It was basically a heated make-out session that got everyone talking. Immediately, everyone took their kiss to mean the two were dating. As much sense as it made, they both took to social media to quickly shutdown the rumors.

Puth tweeted, "Before it begins... we are just friends. So happy to [perform] with Meghan tonight!! Thank you for all the love everybody! :)" As for Trainor, she took to Instagram and wrote, "All about dat ass grab doe @charlieputh proud of you Charlie #imsingle." See that hashtag? Yeah, that pretty much cleared up those rumors.

Actually, after Puth and Trainor's kiss, he spoke with USA Today about it and said, "Meghan and I are good enough friends that we can laugh about it now. At first, we were like, 'Holy [expletive], what did we just do?' I have a girl kind of in my life right now that I'm not making too public and I don't want people to get the wrong idea."

So this "girl" Puth spoke of, who was she? It's unclear, but that leads me to the next person he was once rumored to be seeing. It is none other than Selena Gomez, who is featured in Puth's song, "We Don't Talk Anymore."

In March, it was reported that Puth and Gomez were hooking up. In November 2015, he also told Us Weekly, "I don’t know if anyone really understands me, which is why I hang out with Selena Gomez. She gets me." Yeah, that added fuel to the fire. A month after the reports of their alleged hook-up, Puth went on Elvis Duran and cleared it all up. He said matter-of-factly, "I never dated Meghan Trainor, and I’m not dating Selena Gomez. There is nothing to say." So, there you have it.

He just can't escape the dating rumors, can he? That's the life of being in the spotlight. As of this time, it appears Puth is still very much single. On Thursday, July 28, he tweeted, "I need a girlfriend." Then, he added, "I'm always on the road it's hard to meet new people..."

I'm sure he'll meet someone soon enough — or at least make headlines for another rumored relationship in the meantime.

More like this
Selena + Chef Season 4 Was Filmed At Hannah Montana's Old Malibu House
By Jake Viswanath
Selena Gomez Has Been Spotted Having Fun With A Top Film Producer
By El Hunt
Who Is Camila Cabello Dating? She's Getting Cozy With Lox Club CEO Austin Kevitch
By Radhika Menon
Leona Lewis & Husband Dennis Jauch Welcomed Their First Child
By Darshita Goyal
Get Even More From Bustle — Sign Up For The Newsletter