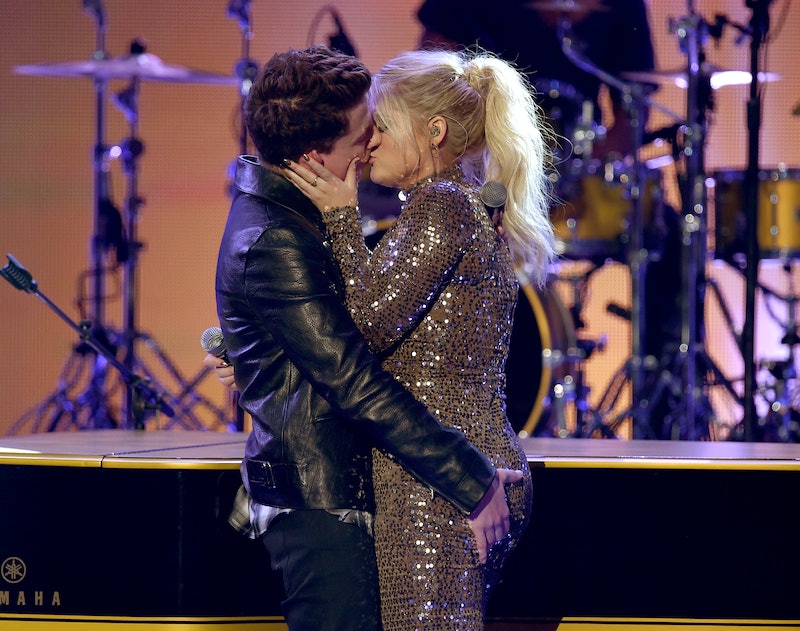 During Sunday's broadcast of the American Music Awards, there were quite a few noteworthy moments, including Jennifer Lopez's opening dance number, Justin Bieber's soaking wet performance, and, of course, Meghan Trainor and Charlie Puth making out on stage during their song "Marvin Gaye." Viewers immediately took to Twitter to react to the kiss (which seemed to last forever and was quite steamy) and speculated that the two were a couple. Well, later that night, Meghan Trainor denied the Charlie Puth dating rumors, but showed she still has nothing but love for the singer.

Trainor took to Instagram, where she wrote alongside a photo of that hot make-out session, "All about dat ass grab doe @charlieputh proud of you Charlie #imsingle." That's right, hashtag she's single. However, that doesn't mean she didn't enjoy the kiss or Puth grabbing her butt, as she expressed in the photo caption.

As for Puth, he responded to the dating rumors Sunday night and wrote on Twitter, "Before it begins... we are just friends. so happy to preform with Meghan tonight!! Thank you for all the love everybody! :)"

There you have it. The two are very much single and are not dating one another — for now, anyways. I don't know about you, but they clearly have a lot of chemistry.

If you missed the kiss or need a reminder, here's what it looked like:

Yeah... that's on onstage kiss that won't be forgotten.