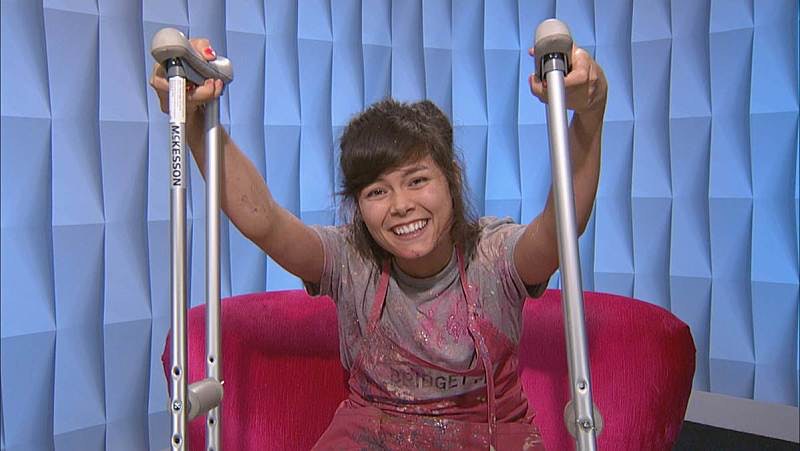 You need to have a thick skin to compete on Big Brother, as each houseguest is pushed to their physical, mental, and emotional limit over the course of the summer. While the competitions and threat of eviction cause some of the stress within the house, more often than not, it's the houseguests who work to tear each other down. A particularly harsh example came before Frank's eviction leading some fans to fear that bubbly travelling nurse Bridgette is the victim of not just game-based manipulation, but bullying as well. In an effort to turn Bridgette against Frank, Paul had a harsh talk with her that involved some pretty hurtful words. Seeing this conversation made some fans stop for a second and wonder, was this just gameplay, or was Paul bullying Bridgette?

Since Paul's Head of Household win, he's been declaring that his number one target is Bridgette, which isn't surprising. Frank and Bridgette were, very briefly, running the house and managed to get on everyone's bad side. However, it seems that being on Paul's bad side brings out the worst in him. Prior to Frank's eviction, Paul sat Bridgette down to say to her, "I thought you were cool, I really liked you a lot, but the more you started hanging out with [Frank] the more people got a strong distaste for you."

It's easy to get confused and think that somehow the Bridgette that Paul is talking to is different than the Bridgette that Big Brother fans have become familiar with. Bridgette has earned a reputation for being relatively nice, loyal, and friendly towards other players. However, that hasn't stopped her from becoming a villain in the eyes of some of her fellow houseguests. Paul also said to Bridgette, "Your narcissism went up. Your ego went up. Your snootiness went up." He even drops some phrases like "No one else is gonna tell you this."

The conversation is reminiscent of Jace's controversial treatment of eventual BB17 winner Steve, but not nearly as brutal. The comparison, however, is not unfounded. Paul and Jace are both loud, brash personalities and Bridgette and Steve are both quiet, nerdy, and seem genuine. Paul's attempts to turn Bridgette against Frank didn't work in the long run, but with Frank gone and Paul serving as HoH, Bridgette is going to have to make some huge moves to ensure her safety, which means she has to rebuild a lot of bridges in the house. Paul's relationship with Bridgette is rocky at best, but it's nothing compared to the animosity between Michelle and Bridgette.

Confrontations like these in the Big Brother house are nothing new, but it's still hard to watch people like Bridgette, who don't have any allies, be on the receiving end of such harsh words. She is currently public enemy number one in the house due to her association with Frank, and that reputation doesn't seem fully earned. Hopefully, as the summer goes on and the heat gets turned up, both figuratively and literally, Bridgette will see some of her enemies turn into friends for the sake of both her game and general happiness in the house.