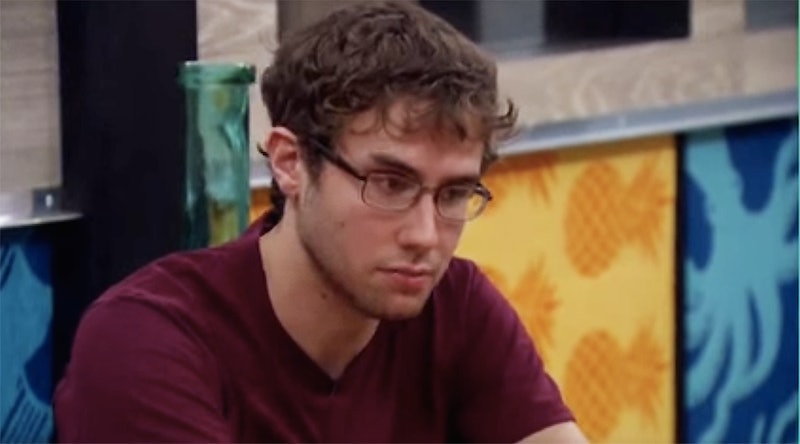 It might have been practically only yesterday that Season 17 of Big Brother premiered, but already contestant Jace Agolli is facing criticism from fans. As you may recall, Jace is the personal trainer/California surfer dude who looks like Big Brother 16's Hayden Voss or maybe Jay of Jay and Silent Bob fame. However, he does not share the good humor of either of those lookalikes because, as the live-feed cameras captured, Jace was bullying houseguest Steve Moses. Not okay, Jace. NOT OKAY.

A little background: When Jace proved to be a strong competitor, his fellow housemates conspired to backdoor him. (For those who aren't "in the know," that means putting pawns up on the block to compete for their safety with the end goal being to nominate someone right before eviction, so they have no chance or notice to remove themselves from the block.) Jace reacted by campaigning to get votes to stay. Unfortunately, part of his strategy was bullying Steve. In the 20-minute video, which you can watch below, Jace is seen cornering Steve and pressuring him in a completely unacceptable manner.

No points for similes, Jace, because you're being a jerk. Steve, on the other hand, remains calm in the face of this awkward confrontation. All of the points to you, Steve.

Jace's next tactic is to attempt to turn Steve against his alliance. "You were supposed to be my friend," he continued. "You think these people are your friends? You think they care about you like I did? Do you? You know what they say about you when you're not around? ...I've stuck up for you when people are making fun of you behind your back. They make fun of you the second you walk out of that room."

Jace goes on to question Steve's character, accusing him of lying and even attempting to guilt him for his actions. He also called Steve a "little rat." You know, the kind of things you say to someone whose back you have. Again, Steve maintained his cool and kept apologizing if he hurt Jace, which was probably the best way he could have reacted in the situation.

You can check out all of Jace's gross tactics in the video above, but let me emphasize again, his behavior is not okay. Bullying is never acceptable, even with half a million dollars at stake. Jace not only insulted Steve, but he also made him question his trust. Oh, and there's the issue of Jace belittling Steve's character again and again. He's manipulative and cruel, and there's no excuse for his actions.

Here's hoping this is the last we see the last of Jace on Big Brother. And Steve, mad props to you for staying calm when faced with one seriously vile confrontation. It's clear from the way fans have been tweeting that, even if Jace somehow manages not to go home this week, then he's definitely out of the running for America's Favorite Player.