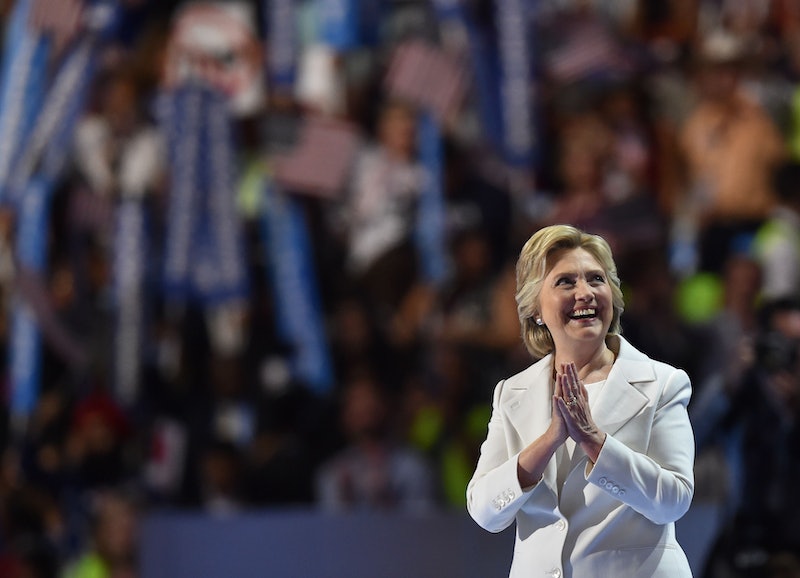 You know her laundry list of accomplishments — they've been harped on so much, it's getting ridiculous. But, apparently, there's something blocking the acceptance of her proven worthiness from penetrating the thick, sexist region of America's skull. It's what Clinton referred to in a 60 Minutes interview as "The Hillary Standard" and the science is on her side.

Currently, Hillary Clinton and Donald Trump are tied in the polls. Hillary Clinton, a lifetime public servant, has a presidential résumé seemingly made in heaven: Yale Law grad, attorney, first lady of a state and the nation, leader in education reform in Arkansas, national chair of the Children's Defense Fund, a staff member of the Judiciary Committee during Watergate, U.S. Senator of New York, Secretary of State in the Obama administration, adviser to the president during the Bin Laden raid ending the decade-long pursuit... and that's just what fits on one page if the margins are set to the max and it's in an eight-point font.

On the other hand, Donald Trump has a résumé his own party can't even get behind.

The current president said it best, in his DNC speech on Wednesday:

There has never been a man or a woman — not me, not Bill, nobody — more qualified than Hillary Clinton to serve as president of the United States of America."

I hope you don't mind, Bill, but I was just telling the truth, man.

Obama went on to speak for the rest of the world on how perplexed they are that the United States seems to be involved with this unfounded dilemma:

I have to say this. People outside of the United States do not understand what’s going on in this election. They really don't. Because they know Hillary. They’ve seen her work. She’s worked closely with our intelligence teams, our diplomats, our military.

So, how is this seriously a thing? Yes, she's been through her fair share of political scandals, but it's more than that. What Clinton refers to as "The Hilary Standard" isn't new and, according to an American University/ Loyola Marymount University study, science has her back. The study finds that women remain underrepresented in American politics despite their equal, and oftentimes, superior performances. A complementary study published in the American Journal of Political Science calls it the "Jill Robinson effect" — a reference to the first African-American pro-baseball player, Jackie Robinson, who had to be leagues better than his teammates just to get a chance. The findings show that even though women have a better track record when serving in public office, the gender bias in America remains debilitating.

Regardless of the deep-seated, systemic disadvantage, Clinton's risen to the occasion throughout her life and career, and hasn't let that glass ceiling stop her.

As Obama so charmingly admits of his time as her opponent, "She was doing everything I was doing, but just like Ginger Rogers, it was backwards in heels."

More like this
Watch Jacinda Arden’s Devastatingly Honest Resignation Speech
By Sam Ramsden
What The UK Blocking Scotland’s Gender Recognition Bill Means
By Sam Ramsden
Amazon's Selling A Ton Of These Stylish Things With Fanatical Reviews
By Alexandra Elizabeth
Your Ultimate Guide To Aquarius Season
By Brittany Beringer
Get Even More From Bustle — Sign Up For The Newsletter
From hair trends to relationship advice, our daily newsletter has everything you need to sound like a person who’s on TikTok, even if you aren’t.