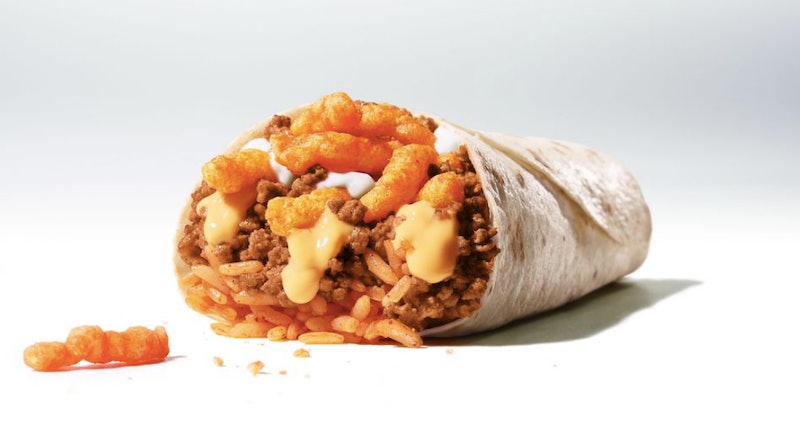 Now that we've all endured the vicious heat dome this summer, the universe is rewarding us in the form of Taco Bell's new Cheetos Burrito. OK, OK, so not all of us quite yet — according to Business Insider, Taco Bell will be testing the Cheetos Burrito in Cincinnati in mid-August. This means two important things: one, that it's time for all of us to move to Cincinnati; and two, the fate of the taco world now rests in this city's hands.

It's hard to believe that it took humanity this long to stumble upon something so simple, and yet so brilliant. The Cheetos Burrito will consist of ordinary Taco Bell fare — meat, rice, and cheese sauce — but lovingly wedged between the layers will be the your fave cheesy snack, the humble Cheeto. The burrito will reportedly be available for a mere $1, which just goes to show how achievable your #LunchGoals can be in 2016. EVERY DAY IS TACO TUESDAY.

If there were any doubt in your mind about how majestic this creation might be, look no further than the Cheetos Burrito itself. Cross all your taco holders, I mean fingers, that this does well in the test market so your taste buds can experience the magic firsthand.

Did anybody else just black out in the middle of work?? Reportedly the Cheetos Burrito has already semi-made an appearance in Canada in the form of Crunchwrap Sliders filled with Cheetos, but hopefully just like Celine Dion and Tim Horton's, they gift it to America out of the generosity of their Canadian hearts.

Of course, this is far from the first time Taco Bell has created a glorious hybrid of cheesy snacks and tacos. The Doritos Locos Taco was so revered in the taco circuit that it even came with its own holster, lest we all look like taco-eating amateurs wasting cheese dust on our bare fingers that demands to be consumed.

In the meantime, if anyone wants to road trip to Cincinnati in a few weeks, count me in. As to whether or not I'll share my many Cheetos Burritos with you when we arrive at our destination... well, we can taco 'bout it.