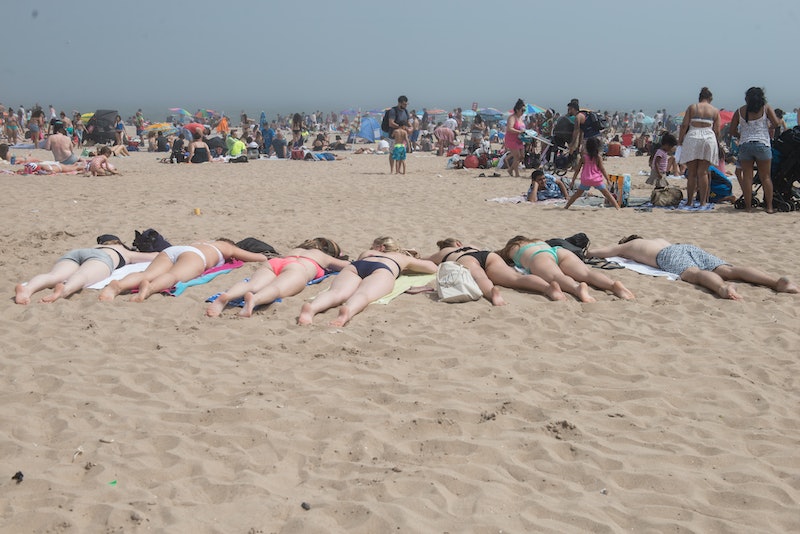 If you’re a human in the United States, no doubt you are already well aware that most of the country has been roasting under unusually high temperatures this week. The culprit? A weather system known as a “heat dome.” Which states were most affected by the heat dome? Let’s just say that if you live in almost any part of the mainland United States, you are not very happy right now.

In case you missed it, here’s the run down on the weather phenomenon known as a “heat dome”: (I have to say, every time I hear the term “heat dome,” I imagine some kind of Mad Max-esque, post-apocalyptic stadium in which people fight to the death for water. I have a feeling that if you were inside the dome this week, you’re thinking, “Yep, that’s pretty much how it was.”) The National Oceanic and Atmospheric Administration defines it this way:

A heat dome occurs when high pressure in the upper atmosphere acts as a lid, preventing hot air from escaping. The air is forced to sink back to the surface, warming even further on the way.

What that means in practice is that areas stuck under the dome get hit with temperatures that are 5 to 10 degrees above average, if not higher.

Temperatures first started to shoot up in the middle of last week. By July 24, 26 states across the country had issued heat advisories; though the huge span of the heat dome was located above the Midwest, the influence of the dome spread much further. In fact, all states in the contiguous United States (with the exception of the Pacific Northwest) reported temperatures at or above 90 degrees on July 22. NBC reported that, due to the heat dome, 200 million people would endure heat of 90 degrees or higher; 130 million people would get heat indices (the “feels-like” temperature) of more than 100 degrees.

The heat dome hit the Northeast and Midwest especially hard. According to the Weather Channel, Philadelphia (where delegates at the DNC sweated out the convention) broke a previous heat record when it reached 97 degrees. Washington, D.C. and Baltimore tied their previous heat records when they hit 100 degrees on July 25, and Newark broke its previous record high with a temp of 99. Texas had a number of cities top the 100-degree mark (although, to be fair, I’ve been in Texas this week, and everyone has been pretty chill about the heat. It’s basically just expected here that temperatures will be approximately the same as the floor of hell for the entire summer, so this heat dome business is NBD).

People living in major cities have gotten a special dose of heat, thanks to the “urban heat island effect.” In cities like New York, concrete and asphalt soak up heat, and tall, crowded buildings hold heat in, resulting in higher temperatures than rural areas. It also takes longer for urban areas to cool off at night, because the concrete and asphalt absorb heat and then release it more slowly than surfaces like grass. ABC reported the temperature of one New York City sidewalk to be a sweltering 139 degrees.

The heat on the East Coast and in the Midwest is finally letting up today and over the weekend (although now those areas have storms and potential flooding to deal with, so… yay?), but temperatures are staying high in the West. The Weather Channel reports that eastern Washington, and parts of Idaho and Utah will be getting up to 100 degrees or higher over the weekend, while parts of southern Nevada, southern Arizona, and the Central Valley in California are expected to rise over 110. This intense heat is especially problematic in drought-ridden California, where high, dry temperatures increase risk of fire. In the last week, two wildfires — the Sand Fire, north of Los Angeles, and the Soberanes Fire, north of Big Sur — have burned more than 60,000 acres.

Stay safe — and cool — out there, everyone.