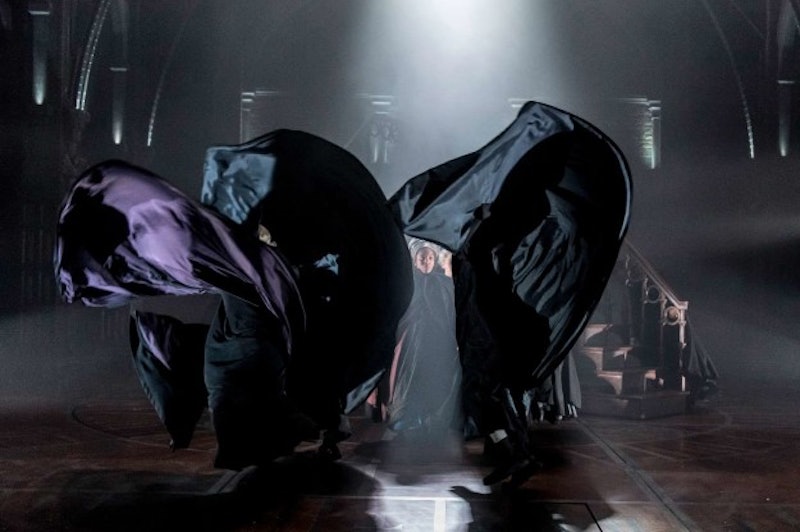 OK, now that you've finished screaming your head off about the release of Harry Potter and the Cursed Child , you're probably wondering: when was Delphi born? SPOILERS AHEAD! If you're utterly boggled by the existence of (GASSSP) Voldemort and Bellatrix's secret daughter, then trust me, fellow Potterhead, you are far from alone. What seemed like a far-fetched idea for a fan fiction you had once in high school became an actual reality when this script hit us with the plot twist to end all plot twists — but really, when you examine the timeline, it's not necessarily as far-fetched as you'd think. In fact, Delphi's existence fits into the narrative so well that it's actually kind of creepy. Did J.K. Rowling have her planned from the start?

First off, it comes as no surprise that if Voldemort were going to have a daughter, Bellatrix would be the mother. The narrative often harks to Bellatrix's romanticized worship of him, how she speaks to him like a "lover". I think the more surprising thing for fans is that Voldemort engaged in any kind of relations that led to a child — Dumbledore frequently reminded Harry of Voldemort's inability to love, and Voldemort never struck readers as a character that was interested in pursuits other than, well, accumulating power and committing mass genocide. I wouldn't have pegged him as someone who would even want an heir, so obsessed with immortality and power that he wouldn't be able to think of his offspring as anything more than competition.

So how on earth would this happen? We all know Bellatrix bit the dust, courtesy of Molly Weasley, at the end of Harry Potter and the Deathly Hallows . She wasn't freed from Azkaban until Harry Potter and the Order of the Phoenix , which gives Delphie about a two year window to be conceived.

Here's where the story of Delphi gets a little bit creepy: Redditor sappy6977 actually figured out over a year ago when Delphi was born. Before we even were fully sure that a Delphi-type character might exist. Read their eerie prediction below:

You ever notice how Bellatrix Lestrange is not there when Snape kills Dumbledore on the tower (in the book, anyways)? Why wouldn't Voldemort's most dangerous lieutenant, and Draco's aunt be there? At the beginning of HBP, Bellatrix says something strange..."If I had sons, I would be glad to give them up to the service of the Dark Lord!" Notice how she said sons, not a son.In DH, it says 3 times that Bellatrix talked to Voldemort as a lover and her death is the only time Voldemort is upset at someone's death.

My theory is Bellatrix was pregnant at the beginning of HBP when they saw Snape with Voldermort's child. She is thinking of the future and says sons instead of son because she already has one on the way. She is missing from the battle because she is off giving birth to Voldemort's child. She changes how she speaks to him after OOTP and Rowling even tells us how. And it's why Voldemort insists on Bellatrix getting rid of Nymphadora and keeping her family tree pruned. Therefore, I think the cursed child is Bellatrix's child with Voldemort. And that the plot will be if a child is born bad because of their parents or if the child has a chance to be good despite.

The only thing the user got wrong was that Delphi ended up being a girl, which somehow makes the "If I had sons" line even MORE darkly ominous. I'M SHIVERING, YOU GUYS.

In any case, in case you were unclear on the timeline, this ought to clear it up for you. Questions still remain, though: Why was she raised by the Rowles? Did they know her true origins? Why were Albus and Scorpius so chill about messing with the time stream with a strange 23-year-old girl?? Maybe we'll find out in the sequel to the sequel, a tell-all called Delphi Does Azkaban.

More like this
Nicola Coughlan Shared A Lady Whistledown Excerpt From ‘Bridgerton’ Season 3
By Grace Wehniainen, Alyssa Lapid and Sam Ramsden
Viserys’ Fate On 'House Of The Dragon' Could Differ From The Book In This Surprising Way
By Grace Wehniainen
Harry Potter's Viktor Krum Has Undergone A Huge Transformation Since Hogwarts
By Sam Ramsden and Meguire Hennes
10 Must-Read New Books Out This Week
By K.W. Colyard
Get Even More From Bustle — Sign Up For The Newsletter