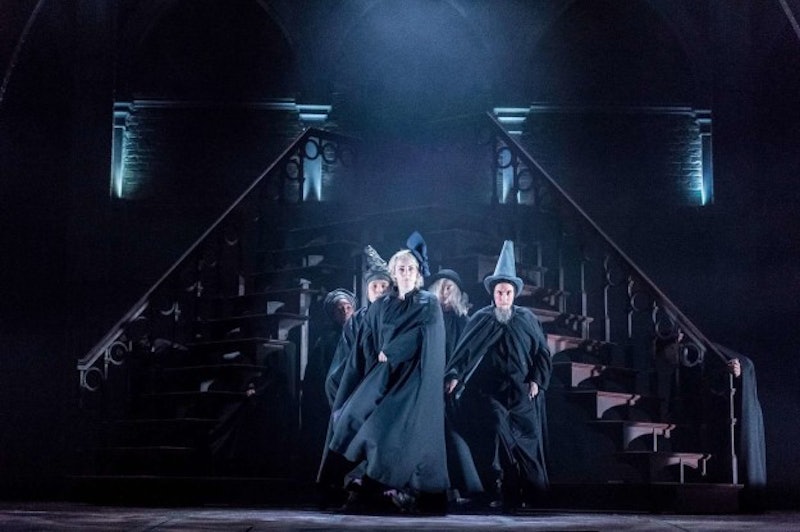 J.K. Rowling is infamous for giving names with hidden and poignant meanings to her characters, so it figures that Harry Potter and the Cursed Child would follow tradition. Naturally, many fans are wondering: What does the name Delphi mean? Spoilers ahead! Even if you weren't aware of Rowling's naming schtick, it's an unusual enough name on its own to make readers wonder why it was given to her. We obviously can't bring Voldemort and Bellatrix back from the dead to ask what they were thinking (well, I hope), but we can safely gather from the origins of this name that it was not given to our new favorite villain by mistake.

The name "Delphi" has Greek origins from the word "Delphus," which means hollow, or womb. Most notably, though, the name has strong affiliations with the Delphic Oracle, the most important oracle in ancient Greece — fitting for Cursed Child's Delphi, whose prophesied fate was a major component of the play.

The origins of the Oracle at Delphi hark back to 1400 B.C.; it was first under the control of the earth mother Gaia, until it was either seized by or given to Apollo. Apollo then appointed Pythia as the Oracle of Delphi, and that's where our Delphi comes into play. Fittingly, the name Pythia shares its roots with "python" — they both derive from the Greek word pythein, "to rot," which specifically refers "the sickly sweet smell of the decomposition of the body of the monstrous Python after he was slain by Apollo." Pythia appropriately is also said to have come from the "House Of Snakes," which I assume was no accident on the writers' part, either.

Now, to understand why this is so significant, we first have to explain Python, who Apollo supposedly killed — he was the defender of the Oracle before he was slain by Apollo, an earth-dragon born of Gaia. We can loosely assume it's safe to say that Python might represent Voldemort, Harry might represent Apollo, and Delphi, of course, would represent Pythia — the Oracle Apollo left behind, who inhales the vapors and fumes of Python's corpse to make prophesies.

The Oracle at Delphi was famous in its day, and everyone from rulers to common people to entire cities would come to the priestess with offers for her prophesies, which were usually cryptic. The remains of the site still stand in Greece today.

It is unclear exactly what happened at the site when people came to her for advice, as most documentations neglected to mention it, assuming it was common knowledge at the time. But Pythia, the Delphic Oracle, has quite the storied past. After the god Apollo supposedly either seized or was given the sacred site from the earth mother Gaia, women from Delphi were chosen over several centuries to serve as the Oracle in succession. It was recorded that she would speak in gibberish, or tongues — perhaps a fitting parallel to Parseltongue, another ancient language Cursed Child's Delphi speaks. The life of the Oracle was often quite short, presumably from the effects of vapors and fumes inducing seizures during prophesies, which were also said to incite madness. Not exactly a far cry from the Delphi we know from the play.

So if you were looking for some justification behind Delphi's name and its unusual spelling, the good news is that its origins are every bit as satisfying as the rest of Rowling's character names. She's still got your back, even if she isn't here to catch all your tears!

More like this
Harry Potter's Viktor Krum Has Undergone A Huge Transformation Since Hogwarts
By Sam Ramsden and Meguire Hennes
Nicola Coughlan Shared A Lady Whistledown Excerpt From ‘Bridgerton’ Season 3
By Grace Wehniainen, Alyssa Lapid and Sam Ramsden
Viserys’ Fate On 'House Of The Dragon' Could Differ From The Book In This Surprising Way
By Grace Wehniainen
The First 'Percy Jackson & The Olympians' Teaser Comes With An Ominous Warning
By Grace Wehniainen
Get Even More From Bustle — Sign Up For The Newsletter