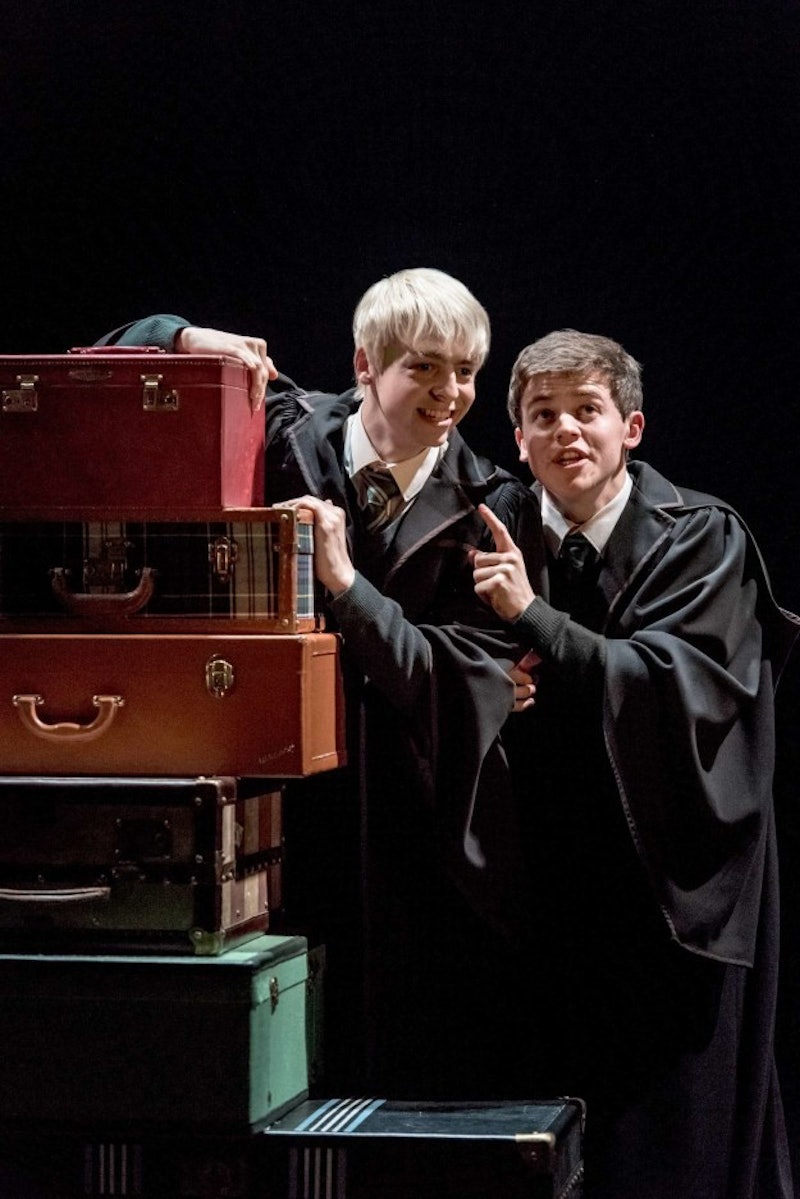 Hello, U-Haul? I'm calling because I need a place to put all my feelings about Albus and Scorpius in Harry Potter and the Cursed Child before they explode inside of all my vital organs. (Warning for anyone who hasn't read the script yet: Spoilers ahead!) I want to say, for the record, that I was high key hoping that J.K. Rowling and Jack Thorne would write a relationship between Scorpius and Albus in this two-part epic to really bring the Potter versus Malfoy feud full circle, but even as I wrote about my hopes for that I knew they were somewhat of a pipe dream. And no, I did not get the relationship I hoped for — but I did get the most epic bro-ship to ever bro, which was at times so painfully adorable I had to set my book down mid-read.

Really, though, you don't have to squint too hard to see that these two basically belong together. Even though in the script Scorpius explicitly likes Rose and Albus explicitly has a super illegal crush on Delphi, they even more explicitly have bro-crushes on each other. Whether or not you sail this particular 'ship, there is no denying that there is plenty of justification for its existence. Here are the adorable moments from Cursed Child that prove Albus and Scorpius would make the cutest couple of all time.

ALBUS hugs his friend. With fierceness. They hold on for a beat. SCORPIUS is surprised by this.

SCORPIUS: Okay. Hello. Um. Have we hugged before? Do we hug now?

2. That Time Scorpius Jumped Off A Train For Albus

SCORPIUS: Well, as fun as you clearly look, I have to go after my friend.

3. That Other Time Scorpius Downed Gross Fish Juice For Albus

SCORPIUS: No. No way, José. If we're doing this, we're doing it (he puts on a pair of familiar-looking glasses with a smile) together.

Let's ignore the fact that he turned into Albus's dad. Or that Albus subsequently made out with his aunt. (How is this never addressed again in the narrative??? I would be way more scarred for life from that than having a famous dad, TBH.)

4. When Scorpius Wanted Delphi To Step Off His Man

Because part of him is a raging Hufflepuff and the other part of him has a massive secret crush on his best friend.

5. When Albus And Scorpius Full On Turn Into The Notebook

ALBUS: And if I won't? Stay away from him?

HARRY: *lots of terrible parenting nonsense I'm going to skip ahead for the sake of focusing on the aDoLesCenT aNgSTTT*

Sorry if you were all just deafened by the sound of my heart splitting in two.

6. When The Notebook Vibes Intensified

SCORPIUS: You can't what?

ALBUS: Just — we'll be better off without each other, okay?

SCORPIUS is left looking after him. Heartbroken.

HEARTBROKEN, you guys. So heartbroken that the word had to be capitalized, in its own sentence, like a mic drop. Our poor baby heroes.

7. SERIOUSLY GUYS, This Is Forbidden Romance To The Nth Degree

ALBUS enters and walks up one staircase.

SCORPIUS enters and walks up another.

The staircases meet. The two boys look at each other.

Lost and hopeful — all at once.

And then ALBUS lokos away and the moment is broken — and with it, possibly, the friendship.

And now the staircases part — the two of them look at each other — one full of guilt — the other full of pain — both full of unhappiness.

Did anyone else imagine this entire scene set to penny whistle solo from Titanic, or ... ?

8. When Scorpius Cried Salty Tears For Their Lost Love

DRACO: I'm not here to antagonize you. But my son is in tears and I am his father and so I am here to ask why you would keep apart two good friends.

9. When Even Voldemort's Daughter 'Shipped It

DELPHI: You're best friends. Every owl he sends I can feel your absence. He's destroyed by it.

And then, a few lines later:

DELPHI: That's the thing, isn't it? About friendships. You don't know what he needs. You only know he needs it. Find him, Scorpius. You two — you belong together.

She may have an evil garbage dumpster fire for a soul, but she calls 'em like she sees 'em.

10. When They Literally Couldn't Live Without Each Other <3

ALBUS: And it's something I should have said a long time ago. In fact, you're probably the best person I know. And you don't — you couldn't — hold me back. You make me stronger — and when Dad forced us apart — without you —

SCORPIUS: I didn't much like my life without you in it either.

BECAUSE YOU BELONG TOGETHER, YOU PERFECT DOPEY DOPES.

HARRY: Well, they are together.

DRACO: In the girls' bathroom on the first floor. What on earth would they be doing there?

12. When Scorpius Tried To Save Albus

Sorry, I'm not crying, I just have the inconquerable power of friendship stuck in my eye.

13. And Then Albus Tried To Save Scorpius Right Back

ALBUS: Do your worst.

DELPHI looks at him. And then turns her wand on SCORPIUS.

DELPHI: Yes, as I thought — this frightens you more.

How on earth did these adorable angst buckets end up in Slytherin? They are not ambitious or self-serving at all! They are constantly putting themselves into mortal peril for each other!

SCORPIUS reaches in and hugs ALBUS.

ALBUS: What's this? I thought we decided we don't hug.

SCORPIUS: I wasn't sure. Whether we should. In this new version of us — I had in my head.

Funny you should mention new versions of you guys that you have in your head, Scorp, because in my head you guys would make the cutest couple of all time. And hey — Rose isn't biting, and Delphi is super duper locked up for life (RIP, Craig), so really, Albus x Scorpius were clearly meant to be. But until we get the adorable sequel describing their relationship at length that we all deserve, the fan fiction will sustain our desperate 'shipping hearts. ALPIUS 4 LYFE.