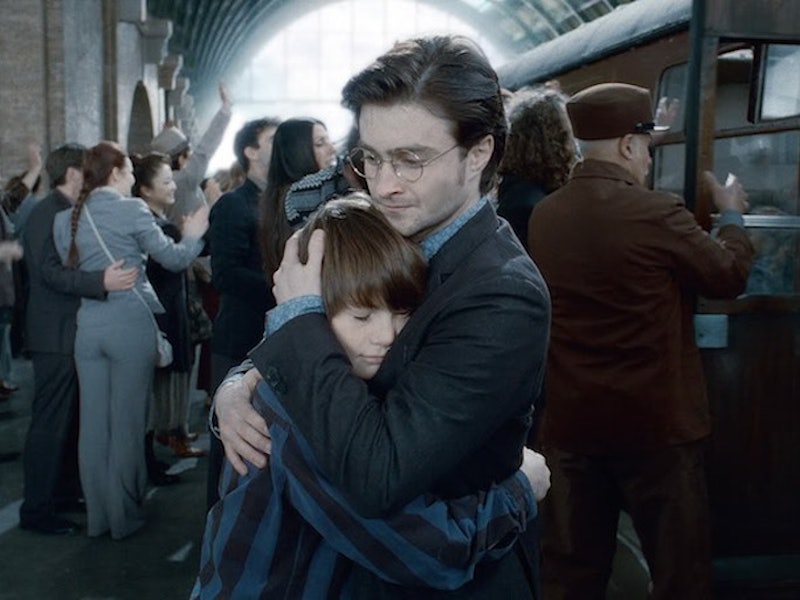 Now that we've all recovered from the miniature heart attacks brought on by the Pottermore announcement that the Harry Potter and the Cursed Child script will be released as a book to the general public, we can take a little time to examine the implications more thoroughly. Namely — what on earth is going to be happening in this play?? The details we have are especially bare, considering we still have months to wait. So far all we know is that the play is "epic," spanning two parts that will both feature Albus Severus Potter, Harry Potter's son, as the aforementioned "Cursed Child". We also know that the play will take place 19 years after the Battle of Hogwarts, and will feature a cast of around 30.

Here are the only concrete details about the plot that J.K. Rowling has released so far:

TL;DR: Stuff's about to go down in Harry Potter-land, and Harry and Albus Severus are right in the heart of it.

Even so, that doesn't give us a lot to go on, aside from the speculation that this play has the potential to be dark AF. But as the play's July 31, 2016 release on the West End looms nearer, along with the the public sale of the script, it's more than natural to assume that there are some plot lines that the Potterverse will be revisiting in their debut on the stage. Here are a few we might get to see:

Ron And Hermione Are Probably Still Duking It Out

But hopefully in a fun, loving, constructive way, and not the way they did when they were teenagers. I'm quite curious to see how Rowling will portray their relationship, especially after she herself discredited it as "wish fulfillment" and said that Hermione should have ended up with Harry. Personally, as a fan of Ginny and Harry, I'm not on board with that — but I do agree with Rupert Grint, who said that Ron and Hermione would have been divorced by now. There are really a hundred ways this relationship could believably have shaken out.

The way that plot description reads, I think it's pretty safe to say that he's not sorted into Gryffindor. The last book carefully portrayed him as anxious, as just as much of a misfit as the two men he was named for — and in particular concerned about which House he'd end up in. My guess is that he gets sorted in one of the other three houses, and that is the beginning of him feeling the weight of not being able to live up to his father's legacy the way we already know James Sirius Potter did.

Scorpius Malfoy Is Going To Surprise Us In Some Way

I have two reasons for thinking this: One is that J.K. Rowling wouldn't rest on the old Potter/Malfoy character dynamic a second time. If we're going to watch Albus and Scorpius relive their fathers' hateful rivalry, then what's the point of having a brand new story in the first place? My second reason for this is that Draco Malfoy never had that satisfying redemption arc the way so many fans hoped he would. While I stand by Rowling for that decision — Malfoy suddenly coming to the light at the end of the novels would have been ridiculously out of character, as young and angry and conditioned by his parents as he was — I do think that this would be a nice opportunity to tie up that loose end. Maybe Scorpius doesn't end up a Slytherin. Or maybe he does, and he ends up befriending Albus Severus, and that's one more thing that sets them both apart from their families. Either way, Scorpius is for sure going to be a wild card in this upcoming installment.

Pottermore made big waves on the Internet a few months ago when they quietly and inexplicably removed the date of death from Lavender Brown's character page. It was assumed she died as a result of her injuries fighting Fenrir Greyback in the Battle of Hogwarts, a fact that was never confirmed in the books but was portrayed in the films. My guess is if they went to all this trouble to make her death ambiguous, she's going to play some kind of role in the upcoming play as well.

The epilogue was nice and shiny like a store shop window, which was really the assurance fans needed after reading in open-mouthed horror as J.K. Rowling murdered our faves right and left in the Battle of Hogwarts. But no teenager watches their fellow students and comrades and walks away from it unscathed for the rest of their lives. We'll finally get a glimpse of how each character individually handled the aftermath of the war, and I get the uneasy sense from the plot description that we could easily rename this play Harry Potter and the Infinite Survivor's Guilt.

Never in my life have I shipped something so hard based on so little. We need this ray of sunshine in the cold, dark Potter storm that is headed our way. With some magenta Teddy hair, pretty please!

The "Unexpected Darkness" Is Going To Come From The Good Guys

I have a sneaking suspicion that there is a traitor in their midst. Somebody we assumed was good in the series — someone we either implicitly or explicitly trusted — is going to turn on us. Or maybe the entire culture of the Wizarding World will have shifted and become its own enemy. Maybe now it's the children of the former Death Eaters who live in fear, and the children of the survivors who torment them. The word "unexpected" definitely gives the sense that the darkness is not going to be nearly as black-and-white as it was in the original series.