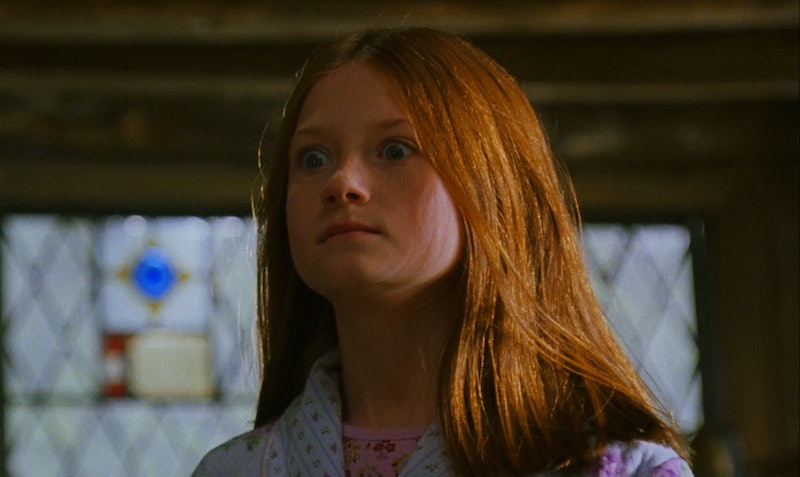 The Harry Potter series has always been equal parts witty and enchanting, and Cursed Child has that trademark twinkle-of-the-eye humor. But that doesn't mean Cursed Child doesn't have it's fair share of cringe-worthy moments, because these seven awkward Cursed Child moments definitely made readers — including me — squirm.

There was bound to be some awkwardness, I suppose, since the two leads, Albus and Scorpius, are teenagers. Who wasn't awkward during their teenage years? Harry, Ron, and Hermione certainly had their share of uncomfortable encounters during their time at Hogwarts. But for some reason, Albus and Scorpius have a particularly rough time of it. Honestly, they’ll probably be obsessed with time turners forever… after the embarrassing moments they had in Cursed Child, they would probably want to stop a few of those things from ever even happening. And if a time turner won’t do it, maybe they’ll be calling up Gilderoy Lockhart for a quick Memory Charm, because the following awkward moments are too uncomfortable to forget without some magical help…

1. When Albus Gets Sorted Into Slytherin

"Dad, what if I'm in Slytherin?" Oh, Albus, you're Harry Potter's kid! Of course you won't be in Slytherin!

Wait... just kidding, you're definitely going to be sorted into Slytherin. Talk about an awkward sorting scene.

Scorpius, bless his heart, doesn't know how to compliment the object of his affections: Rose Granger-Weasley. His flirtation falls flat when he tells Rose that she smells like bread — "nice bread, good bread, bread... what's wrong with bread?"

Scorpius and Albus try to leave the Hogwarts Express, but the Trolley Witch doesn't let them go without a fight. She tells them that "this train – it doesn't like people getting off it" and suddenly her hands "transfigure into very sharp spikes" and she starts throwing pumpkin pasty grenades. Um, what? The shift from kindly old woman into grenade-throwing spike-handed bouncer was definitely a bit awkward — though mostly surprising and hilarioius.

4. When Albus Makes Out With Hermione

In one particularly awkward scene, Albus — disguised as Ron and under the influence of a Polyjuice Potion — kisses Hermione "firmly" and asks her if she'd like to have another baby. The whole thing "develops into quite a struggle." He's doing all this to stop Hermione from going into her office, where Scorpius and Delphi are hiding. But still, this scene is so unbelievably awkward. Afterwards, Scorpius remarks that he doesn't know "whether to high-five [Albus] or frown at [him] for kissing [his] aunt about five hundred times!"

5. When Albus Flirts With Voldemort's Daughter

As Albus is practicing spells, Delphi calls him a "positively disarming young man." He says he's never been good at spells, and he wants her to "stick around" and teach him more. Then she kisses him on both cheeks. It's sort of cute.... until you find out that Delphi is Voldemort's daughter. Well, then it's awkward.

6. Every Time Hermione And Ron Interact In Alternate Timelines

Whether they're a professor and a man who's married to someone else, or rebels who still haven't realized they love each other, Hermione and Ron are all about the awkward interactions. Just admit you love each other!

7. When Draco Is Once Again Caught In An Awkward Hug

As Harry hugs his son, Albus, Draco tells Scorpius, "We can hug too if you like." Next, the script reads: "They sort of half hug in a very awkward way." Poor Draco.