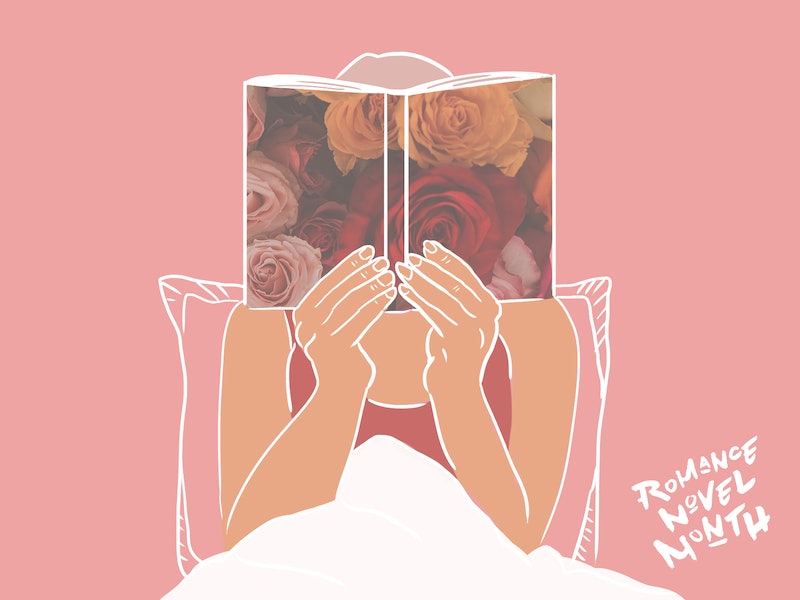 I like stories about epic quests and stories where warrior princesses fight against all the odds and win, and I like stories with shocking plot twists. (To quote The Princess Bride, my ideal story has “fencing, fighting, torture, revenge, giants, monsters, chases, escapes, true love, miracles.") This is why I've never made romance novels a part of my regular reading ritual — I already know how the story is going to end. But, in honor of Romance Novel Month, I decided to read a romance novel for the first time.

I don’t mind some romance in novels, but I usually prefer it as a side plot. I like when there’s some obvious chemistry between two characters, but most of the time, they just don’t have time to act on their attraction because they’re too busy saving the world. So, reading a romance novel was a very different experience for me, but ultimately, a worthwhile experiment.

The problem is if you always read the same type of books, you will never expand your horizons. That means reading a little bit of everything, because every book has something to offer. So, after consulting some romance readers, I chose A Night To Surrender by Tessa Dare and cracked open the first page. Here’s what happened when I read it:

1. I Was Annoyed When I Began Reading

"Go ahead, just try to impress me," I said as I flipped to page one. The first scene introduced the hero — a tall, dark, and handsome sort-of rake. He soon meets the heroine — a beautiful and innocent redhead. Everything took place in a quaint village in the Regency era, where scandal was brewing amidst the tea. I rolled my eyes, but kept turning pages.

2. The Characters — And The Plot — Surprised Me

Just when I thought I had this book all figured out, the heroine dressed up as a man and announced that she was joining militia. I'm sorry — what? I did not expect that to happen. The hero and heroine had much they wanted to accomplish within their small community, and often had to work together to make it happen. I realized there was way more to romance novels than just lusting and pining and kissing. It had a little bit of the adventure I look for in novels!

3. OK, I Was Rooting For The Couple

I'll admit it, I wanted the two characters to have their happily ever after. I'm accustomed to stories where the romance plot takes the backseat, but this one had it at the wheel. I realized I actually loved it. I couldn't help but root for the couple — that's the point, after all — and I didn't expect to enjoy it as much as I did.

4. I Wondered What Jane Austen Would Think

This book is a historical romance set in the Regency era, and some of the similarities to Jane Austen's romance novels are very obvious: there are the matchmakers, the officer-obsessed teenagers, the preoccupation with marrying in your class. One of the characters even remarks on a woman's six-inches-deep-in-mud skirt. (Hello, Lizzie Bennett.) But I also couldn't help wondering what Jane Austen would think about the moments in the book that weren't quite as, erm, subtle as she was accustomed to. I imagine that she would have enjoyed them — she was always progressive for her time.

5. The Book Seemed Historically Accurate (To Me, At Least)

In the book's Afterword, author Tessa Dare discusses Regency-era medicine and women's health. Though the main plot of the book revolves around the romance plot, Dare also works in moments about women's health during this era. She really did her research for this book, and it showed.

6. The Genre Was Different Than I Previously Assumed

Romance novels may seem formulaic, but in actuality there's only one rule: the novel must end with a Happily Ever After. That doesn't necessarily mean that the couple rides off into the sunset. It just means they've come to some understanding about their love for each other.

This book surprised me multiple times. I wasn't expecting to be quite so shocked by the characters or quite so intrigued by the story. Romance novels might not be my cup of tea, but after reading a "real" romance, I know that many of my preconceived notions about the genre were incorrect. Once I got past those misconceptions and past those torrid covers (they can be a little silly), I found a story that I actually enjoyed. And maybe I'll even pick up another.

Beginning on August 1, Bustle will host Romance Novel Month, a month-long celebration and examination of the romance novel genre. But don't worry, romance readers: the coverage won't end in August. We're proud to support romance novels, and we will continue to do so all year long.