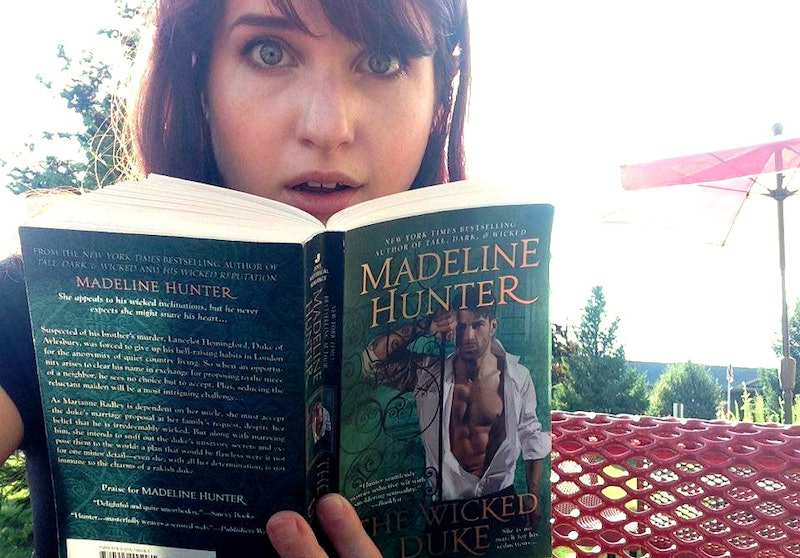 I have a confession to make: up until this very week, I had never read a romance novel. Nope, not even Fifty Shades Of Grey . Part of the reason is that I'm just not a big fan of romance-oriented plotlines, but mainly, I'm just a huge prude when it comes to books. Don't get me wrong, I'm super open with sex as a whole. Given the extent to which I talk about it, write about it, and joke about it, all signs would point to me being a huge fan of sexy books, but for some reason, the concept always made me blush. Of course, I knew that some romance novels don't have any sex at all, but I wanted to start with one that did.

I recently decided to lose my romance novel virginity, but I felt that merely stepping out of my comfort zone wasn't enough. I wanted to nix all the foreplay and let my freak flag fly... or at least flop around in the wind a little bit. So I decided that the only logical way to pop this cherry was to do it in public.

The first thing I had to do was find the perfect book. Part of the reason the Fifty Shades of Grey series became so popular is because the cover looks like it might belong to any old novel. Before it became a household name, it was a series you could read on your morning commute without feeling like everyone was judging you for reading what was essentially literary porn. Other authors and publishers have followed suit, and I soon discovered that if I wanted to play it safe, I could easily find a romance novel that I could read wherever I wanted without even having to worry about raised eyebrows from people around me. But what fun is that?

I decided that the novel I chose had to meet two requirements: The cover and title had to scream "steamy romance book," and it had to have a plotline I thought I'd enjoy. I wasn't just out to make myself feel uncomfortable; I also had to give romance a chance, and that wasn't going to happen if I didn't enjoy the story I was reading. In the end, I settled on Madeline Hunter's The Wicked Duke. It centers around the story of a hunky (but possibly kind of evil) duke trying to eliminate himself as a suspect in his brother's murder and his impending marriage to an initially unwilling maiden who wants to expose him for what he is while fighting her urge to expose him in other ways, if you know what I mean. Scandal! Conflict! A dude named "Lancelot Hemingford" who apparently doesn't know how to button a shirt! I was into it.

Now that I had Lancelot's abs in my hands, I had to decide how to show him off to the world. The term "public" is pretty broad, after all, and I didn't want to cheat by reading the story in a deserted park. I decided that anywhere I went, the book went, too. If I had five spare minutes to read while I was in public, I had to read it. And I had to make sure that at least one person was physically able to see what I was reading. Then, just to make sure I was diving in head-first, I added it to my Goodreads page so everyone knew what I was up to.

I went into the restaurant right before the big dinner rush hit, so I was able to situate myself facing the front and wait for people to come in and see my scandalous choice of literature. I was ready for an onslaught of awkwardness, but instead, I just got annoyed. I'm used to reading in quiet spaces, so trying to get invested in Lance and Marianne's budding love story was pretty hard when there were teenagers to my left talking about Pokemon GO and a middle-aged couple to my right who couldn't get over the fact that the sofritas weren't actually meat. The only time I actually felt weird was when little kids walked into the restaurant, but thankfully, they cared as little about what I was reading as everyone else.

The next stop on my quest to be a literary exhibitionist took was inspired by my Chipotle selfie that revealed the impressive bags under my eyes. All the time I'd spent out of my pajamas and away from my computer screen was really taking its toll, and I needed more than the seduction of a wicked dude to keep me up all night long (or, you know, until 9 p.m.). This time, I sat outside to enjoy the weather with a couple of dudes who were finishing up their coffee.

The guys and I shared a friendly half-smile, so right off the bat, I could rest assured knowing that my efforts to be more comfortable with reading about seduction and sex in public weren't going unnoticed. I had a brief moment of discomfort when one of them turned his head to see what I was reading, but I relaxed when he didn't even react to it. An older man sitting inside near the window, though, was another story. At one point, I angled myself to face the window to get a bit more comfortable, and whether he was intrigued by my choice in literature or was just a creep, he took it upon himself to blatantly stare at me until I chugged the rest of my coffee and left. If he was trying to master Lancelot's smoldering gaze, he needed some practice.

I continued my transformation into a white suburban mom by going to get my hair cut, and of course, that naughty duke had no choice but to accompany me. I forgot to take a selfie for proof here, so you'll just have to take my word for it. My stylist asked what I was reading, and when I showed her and told her it was my first romance novel, she got super excited and exclaimed that she had a ton of titles she could recommend me after I got done with this one. In fact, she said that erotica was pretty much all she read. I felt pretty sheepish — here I was feeling like a scandalous daredevil for whipping this book out in public, and this woman felt exactly zero shame professing her love for the whole genre. I'd never considered myself to be a book snob before, but in that moment, I realized that I might be one.

I figured placing myself among fellow book nerds was my best bet to get a reaction worth writing about, but as I situated myself outside in the summer sun in plain view of everyone who entered and exited the library, the most intense reaction I got from someone was, "You must be sweating your ass off out here." He wasn't wrong.

A little later, a woman made a comment that she'd read (and loved) another one of Madeline Hunter's books and asked me how I was enjoying this one. I told her that honestly, it was pretty darn good. And that was it. No side-eyes from conservative old women, no snickers from immature teenage boys, and no self-consciousness from me. If it hadn't been for the fact that I'd been wearing all black in 90-degree weather like some kind of life amateur, I might have actually enjoyed my time alternating between reading such a sexy book and people-watching for an hour.

The last place that Lance and I ventured together was the chiropractor. You know, because of all the wild, back-breaking sex we'd been having in my imagination. At this point in our exploits, I was so chill about reading this book in public that I wasn't even fazed by the fact that everyone around me was probably someone's grandparent. Since nobody else thus far had batted an eye at my choice in reading material, I almost wanted someone to make a big deal out of it just to spice things up a little.

Alas, the soap opera playing on the TV was far more interesting to everyone in the waiting room except me. It was their loss, though; The Wicked Duke was a much more entertaining choice than the old magazines and even my Facebook feed when it came to passing time in the waiting room. Heads up, medical professionals, providing a few romance novels for your patients to read while they wait will put them in a much better mood by the time you're ready to see them.

I don't know if I'll ever pick romance novels over my normally preferred genres, but I definitely didn't hate my first romantic literary experience. And honestly, reading such a risque book in plain sight wasn't the big deal I thought it would be. As it turns out, people really don't give a hoot about what anyone else is doing as long as it doesn't directly affect them. I wasn't nearly as self-conscious about it as I thought I would be, either. The most embarrassing part of the experience was awkwardly sneaking in selfies to prove to you guys that I hadn't chickened out, but I even got over that once I realized that "I saw a girl take a photo of herself with a book" wasn't the worst story a stranger could tell about me. Even updating my reading progress on Goodreads gave me more of a sense of pride than shame.... at least I could say I was actively reading something, and it wasn't half bad, either.

I'm sure this is all stuff that regular romance readers already know, but for a self-proclaimed literary prude, it was a bit of a surprise. If you're hesitant about whipping out that sultry novel on the subway or during your lunch break, go ahead and do it. Everyone is way too absorbed in their own life to care about what you read in your spare time. Plus, if anyone has a problem with what you're reading, it says more about them than it says about you.

Beginning on August 1, Bustle will host Romance Novel Month , a celebration and examination of the romance novel genre. But don't worry, romance readers: the coverage won't end in August. We're proud to support romance novels, and we will continue to do so all year long.

More like this
The Most Anticipated Books Of August 2022
By K.W. Colyard
The Biggest Differences Between 'Bullet Train' & The Book It’s Based On
By Arya Roshanian
10 Must-Read New Books Out This Week
By K.W. Colyard
'The Sandman’s Ending Is A Departure From Neil Gaiman’s Comic Book Series
By Kadin Burnett
Get Even More From Bustle — Sign Up For The Newsletter