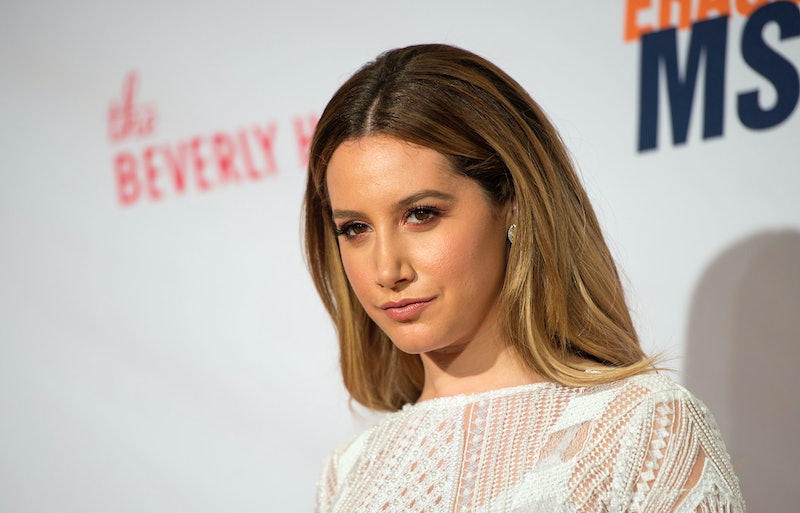 It's hard to believe that it's been over 10 years since the television event that rocked the world, High School Musical, first premiered. That movie, and the several sequels that followed, had a massive impact on pop culture, jump-starting the careers of its lead actors and opening the door for TV musicals like Glee and Smash to take the stage. Yet while fans might still be happily singing "We're All In This Together" a decade later, High School Musical 's stars have been busy branching out in their careers and leaving their Disney Channel images behind. Zac Efron has become the star of the R-rated Neighbors franchise, Vanessa Hudgens has taken on raunchy films like Spring Breakers, and now, Ashley Tisdale is the latest HSM alum to break out, playing a sex worker in the new comedy Amateur Night.

"I’ve always taken baby steps towards something like this, just because I never wanted to lose my fan base and to abandon them. I’m here because of them," Tisdale tells Bustle of her racy new role. "But now, knowing that it’s been 10 years and [my fans] are in their 20s, I figured they’re perfectly ready for this type of movie."

Amateur Night is certainly as different from HSM as you can get. The film, in theaters Aug. 5, stars Jason Biggs as Guy, an unemployed father-to-be who takes a job as a driver, only to learn that his clients are sex workers. He soon meets and befriends several of the women and, during one crazy night, gets pulled into their wild world. Tisdale plays Fallon, one of the sex workers Guy encounters, and the star says that the character is unlike anyone she's ever played.

"I’m really excited to show a different character," Tisdale says. "I’ve never done something like this. It was my first time, and it was definitely out of my comfort zone."

Playing Fallon and taking on such an R-rated movie may have proved difficult for the actor, but it also was something she felt passionate about doing in order to separate herself from the iconic role of HSM's Sharpay, Tisdale says.

"Everybody sees me with blonde hair and they just think of me as that character, so I think I’ll be fighting that challenge until there’s another character they get obsessed with," she says.

Perhaps Amateur Night's Fallon will be just the role. Based on a real person (the film is based on the true-life experiences of its co-directors, Lisa Addario and Joe Syracuse), Fallon is a welcome change from the cliche of the sex worker often seen on-screen; as Tisdale describes, she's a complex character who wasn't coerced into her job, but who has full control over her life.

"What [Syracuse] said that was so interesting to all of us was that these girls were not victims, and they didn’t have pimps. They were their own businesswomen," Tisdale says. "I was drawn to how business savvy they were. No one’s portrayed this side. They weren’t strung out, they weren’t crazy partiers. This was just their work."

Fans will get to see what Tisdale brings to the role when Amateur Night hits theaters, but in the meantime, they can also keep busy by watching out for the star's new music. Tisdale, who's released two albums as a solo artist, says that she's been recording new songs — although she won't reveal exactly when she plans on putting them out, other than that it could be "soon."

"I don’t want to say anything because then people will obviously think it’s happening, but it’s definitely something that I love to do," says Tisdale. "I’m always just trying to find my sound and where I would take it."

With new music and new roles, Tisdale seems more than ready to leave her HSM days behind for bigger and better things.