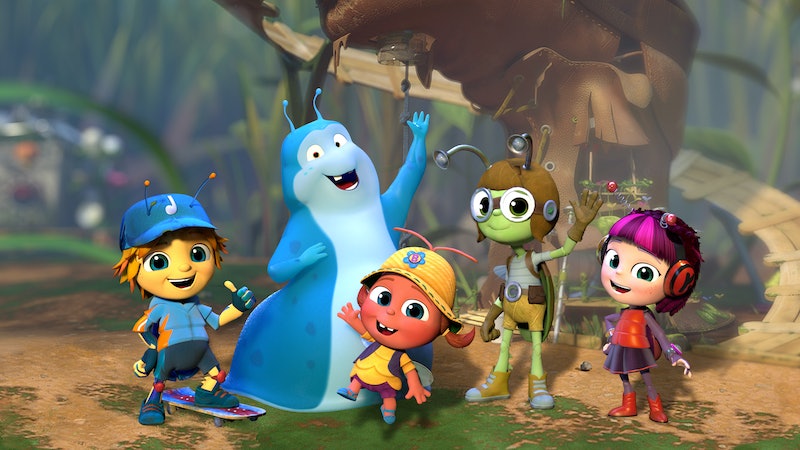 Any major music publication will attest that The Beatles are one of the greatest bands the world has ever seen, if not the greatest band. Their career may have ended over 45 years ago, but their music has lived on in culture since then, inspiring films like Across The Universe and theatrical productions like Cirque du Soleil's Love. Now, The Beatles' music has found its way into yet another medium – children's television. Beat Bugs , the Netflix series — the first season of which premieres Aug. 3 — is taking the music of The Beatles and using it to tell kid-friendly stories. But the Beat Bugs aren't just using the songs themselves, instead, the show has brought in some big talents to cover some of the Beatles classics. The artists on Beat Bugs' soundtrack are sure to bring some exciting and clever interpretations on the songs we love.

According to the Wall Street Journal, getting the licensing rights for Beat Bugs to use Beatles songs was no easy task for the show's creators, but an even more difficult task is giving these classic tunes the tribute they deserve. The best Beatles songs are already so well-known and beloved that it takes a lot for a cover to stand-out. Luckily for Beat Bugs, they've collected some of the biggest names in pop and rock music to put their spin on the music. Here are the artists you can look forward to hearing on Beat Bugs.

Sia, who recently landed her very first #1 single on the Billboard Charts with "Cheap Thrills," is one of the biggest names on the Beat Bugs roster. Her cover of the White Album classic "Blackbird" is a gentle folk tune, just like the original. They key difference is Sia's unique voice, which is the very element that has helped make Sia a pop powerhouse in recent years.

Pink — "Lucy In The Sky With Diamonds"

"Lucy In The Sky With Diamonds" is one of the most recognizable tracks from The Beatles psychedelic period and it's covered on Beat Bugs by one of the most recognizable artists in modern pop music. Pink's come a long way since she got the party started, and she's gotten to the point where as an artist she's able to take a well-known song and make it her own — as she does with this stand-out track from Sgt. Pepper's Lonely Hearts Club Band.

The title track from Magical Mystery Tour is performed on Beat Bugs by rock music legend Eddie Vedder. While the song itself is a far cry from the work that made Vedder famous with Pearl Jam, his cover of "Magical Mystery Tour" still features the whimsy and wonder that made the original track resonate with listeners he first time around.

Indie darlings The Shins, arguably best known for changing Zach Braff's life, contribute a cover of the song "The Word" from the album Revolver. The Shins music is often soft and folk-influenced, but, for Beat Bugs, the band presents a pop-friendly tribute to this Beatles classic.

The first season of Beat Bugs also features performances from late night host James Corden, Aloe Blacc, Robbie Williams, Frances, and Wesley Schultz of the Lumineers performing music from Paul McCartney and John Lennon's massive collection of classic tunes. The show has also already been renewed for a second season and will feature covers by Regina Spektor, Jennifer Hudson, and Of Monsters and Men. Beat Bugs promises to be an exciting program for kids, but, with such a wide variety of artists covering such great songs, this show may prove to have something for everyone.