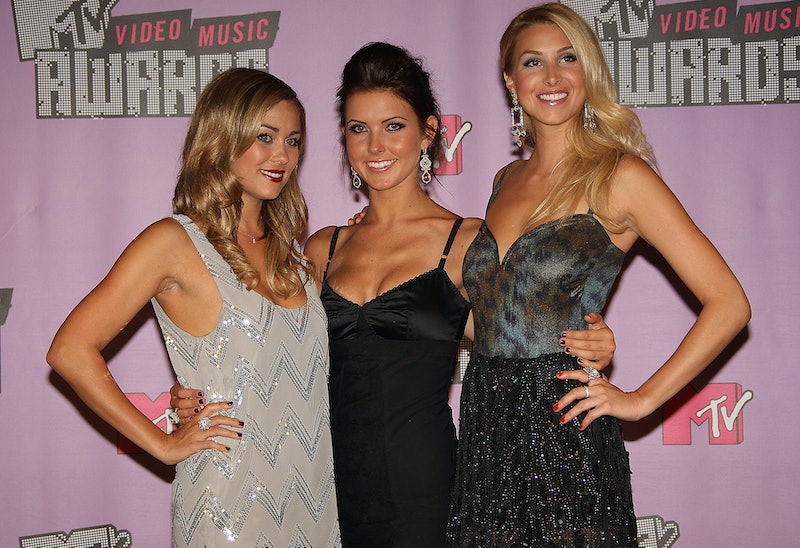 Am I the only one who still gets chills whenever she hears the chorus of Natasha Bedingfield's "Unwritten?" My emotional response to the words "Feel the rain on your skin" is directly connected to my deep, undying love of MTV's Laguna Beach spin-off, The Hills , the series that used Bedingfield's call to "open up the dirty window" as its theme song. Though the series aired its final episode over six years ago, I still have every episode downloaded on my computer for potential re-watching, which, as ritual, I do every summer. The reality show starred Lauren Conrad and her posse of 20-somethings attempting to navigate life in Los Angeles, dealing with struggles like... err, well, not so much struggles as "avoidable friend and boy drama." Of course, how real the drama was on The Hills may be up for interpretation — at least, so says the show's cast.

It's no surprise that The Hills isn't all that real — I mean, this is the show that had its finale filmed on a sound stage, as a wink to fans who always suspected it received the Hollywood treatment on real life. Now that Conrad will be hosting a Hills special titled The Hills: That Was Then, This Is Now, airing on MTV on Aug. 2, it's time to uncover what the cast has said about the authenticity of their on-camera life. Here's what the cast (and crew) has spilled since their days hanging at Le Deux:

In a recent interview with Refinery29, producers Adam DiVello, Sean Travis, and Tony DiSanto spoke about the premise of the show. Although they noted that it was intentional to try to make it seem scripted, they all maintained that the drama was real.

DiVello described the show, saying, "At the time, the only thing [on TV like it] was The Real World, and they talk to camera." He continued, "There was no Real Housewives or any shows like that, so it was like, ‘Let’s take those out and make it feel like it’s a scripted series, but having the kids create the dialogue, and we’ll edit it together to make it make sense.'"

He also said it wasn't a scripted show because, if it was, he would have gone bigger. "I always said that if we wrote the show, we would have had much bigger story lines than what we were dealing with," he told Refinery29. "I think we would have had gigantic, soap-opera-type story lines. We were kind of shackled to the reality of what these people’s situations were."

He did admit, though, that they reshot scenes if they missed them the first time around.

We tried very hard not to step in, but we’ve been very open about the fact that we’ve reshot scenes that we missed. [If] stuff happens off camera, or stuff happens on the weekends, or when we weren’t shooting, we would go back and get it on camera. So, if Audrina heard that Justin Bobby was off doing something that she ain’t happy with, we’d have her sit down and tell Lauren about it, just so that we have it on camera. But it really happened. It wasn’t like we wrote it, you know?

According to Refinery29, executive producer Adam DiVello found Patridge — then an aspiring model/actress — hanging out by the pool at Conrad and then-roommate Heidi Montag's apartment complex. She was then "cast" for the reality series, with her introduction to Conrad and Montag filmed for the series. As she claimed in her interview with radio program Top 40 Australia, Patridge felt that The Hills got less authentic over time. "The Hills, in the beginning was very real, very raw," she said. "But it kind of started transitioning into being guided and manipulated and us kind of coming up with storylines and things.

Laguna Beach alum Bosworth joined the series as Conrad's new roommate, and ended up developing tensions with Patridge. She told Us Weekly that there was an "awkwardness" between her and Patridge because she was "never friends" with the girls in real life. She also took to her own YouTube channel to claim that there was one alleged thing about The Hills that always bothered her.

When you’re in production on a show, you have to do something called taking the ‘room tone,’ just so that all of the microphones are evened out and the sound on the video is normal. And pretty frequently when we filmed, we’d have to stop for a minute to take ‘room tone,’ and everyone would have to be quiet ... So [producers] would catch us gazing off into space, and looking like we were really bored or mad ... And then, they’d take those clips of room tone, and edit them into the show to make it look like we were super mad at each other or whatever.

She also claimed that The Hills was "kinda real and kinda fake," and that, while there were plenty of times the cast didn't get along, there were also times when they did very well.

The Laguna Beach villain, mom, and Balancing In Heels author has been the most vocal about the production side of The Hills — after all, she was the one whose appearance was billed as "The Bitch Is Back." Of course, she claims she was just playing a part: Cavallari alleged to the New York Post in 2011 that "almost all" of The Hills was scripted.

Montag, Conrad's roommate-turned-enemy after Conrad blamed her for a sex tape rumor, told Us Weekly that The Hills was "a scripted show," and had some harsh words to say about her relationship with her ex-BFF:

I spent years pretending to like her for a living ... It was literally my job to deal with her, and it wasn’t pleasant ... I had nothing to do with her problems. I even tried to help her. The fact is, she lied about me and tried to destroy my life, yet I was the one painted as the villain so the show could have her as the good guy ... It’s like if people were still mad at James Earl Jones for being the voice of Darth Vader!

According to The Hills special trailer, we'll finally get the real story behind the reality show on Aug. 2. Though there will likely be plenty of juicy details coming up on MTV, Conrad has stayed relatively neutral about just how real The Hills was. Conrad told Allure:

I think the story [The Hills] told wasn’t a dishonest one. The way they did it sometimes was. They aren’t going to be there for everything. Sometimes two of their main characters will get into a fight, and that’s important to the storyline. The [producers] need that reenacted.

Whether Conrad is telling the truth, or saving the good stuff for the Aug. 2 special, we'll have to wait and see. I know I'll be watching.

More like this
Owen Warner's Net Worth Might Surprise 'I'm A Celeb' Fans
By Sam Ramsden
Here’s Everything Coming To & Leaving Netflix In December
By Jake Viswanath
The First Trailer For 'That '90s Show' Includes So Many Nods To The Original Series
By Jack Irvin, Alyssa Lapid and Grace Wehniainen
How The Thanksgiving Episode Of 'Gossip Girl' Changed Pop Culture History
By Gabrielle Bondi
Get Even More From Bustle — Sign Up For The Newsletter