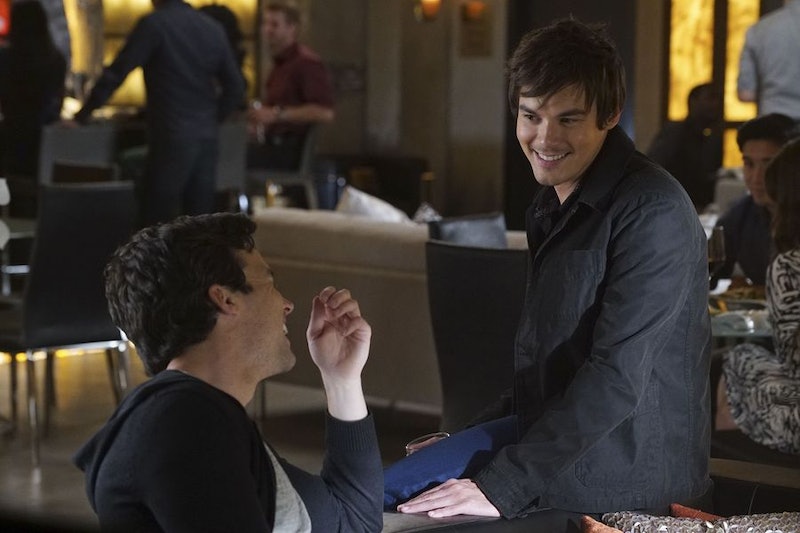 Poor Caleb is currently embroiled in one of Pretty Little Liars' most heart-wrenching love triangles. Being caught between his first love, Hanna, and his new serious girlfriend, Spencer, has made for an extremely emotional Season 7. Last we saw him, he was literally sobbing as he apologized to Spencer, while she cried and rebuffed him, all while Hanna was also tearing up and overhearing the whole shebang. Suffice it to say, there were a lot of tears, and it was tough to see some of the show's most well-loved characters in so much turmoil. But after that heartbreaking scene, he disappeared, and we haven't seen him since. I need to know where Caleb went on Pretty Little Liars, because on this show, even a brief absence can mean terrible things.

There may be something dark brewing; darker even than all of that crying: Since Caleb skipped town, no one (save Officer Toby) seems to know where he is. Spencer spent most of "Along Comes Mary" looking for him, and even with Hanna on hand to advise her of his favorite hangouts, they still weren't able to find the guy. So, where did Caleb go?

First off, there's the simple answer: Perhaps he just needed time by himself, so he went on a little trip — which would certainly make sense, given his love life. This is PLL, though, and the answer is most likely much more complicated than that. Redditor wildensdad pointed out that he could be visiting his old stomping grounds in Ravenswood (perhaps heralding a return appearance from the ever-creepy Mrs. Grunwald), and some fans are even taking his conspicuous absence as evidence that he's joined the A — or rather, AD — team. It might feel like a big leap, but it becomes a little more likely when you consider the fact that he's best buds with one of Rosewood's perennially most suspicious characters — the aforementioned Officer Toby.

Tumblr user av havet also pointed out that Toby's sudden appearance at Rollins'/Archer Dunhill's secret apartment felt a little too convenient — especially when you take into account the fact that someone had just texted Rollins, "The usual spot?" If Toby was the one who sent the text, he could be in cahoots with Rollins, which in turn could mean that Caleb is involved too. After all, as they pointed out, he could be the one posing as Rollins in Baltimore — that would certainly explain his absence, as well as the mysterious sighting (unless it was actually Rollins. With all those new fancy latex masks running around town, you just never know).

As EmilysSourAyygs on Reddit pointed out, Mona could even be the one who sent Caleb to Baltimore, since she's basically spearheading the whole Rollins cover-up situation. They also point out that Caleb would make a very valuable addition to the A Team and/or whatever operation Mona's running, because of his government-level computer skills and all-around smarts.

I think we'd all hate it if Caleb was revealed to be helping AD, but it would definitely be a convenient way of explaining both his absence and the Rollins sighting in Baltimore. At this point, it's all conjecture — who knows, maybe he'll return soon and announce that, after some soul searching and time away, he's decided he wants to marry Hanna. No matter what happens, just please don't let him be the one who gets murdered "for playing with the wrong team," OK?