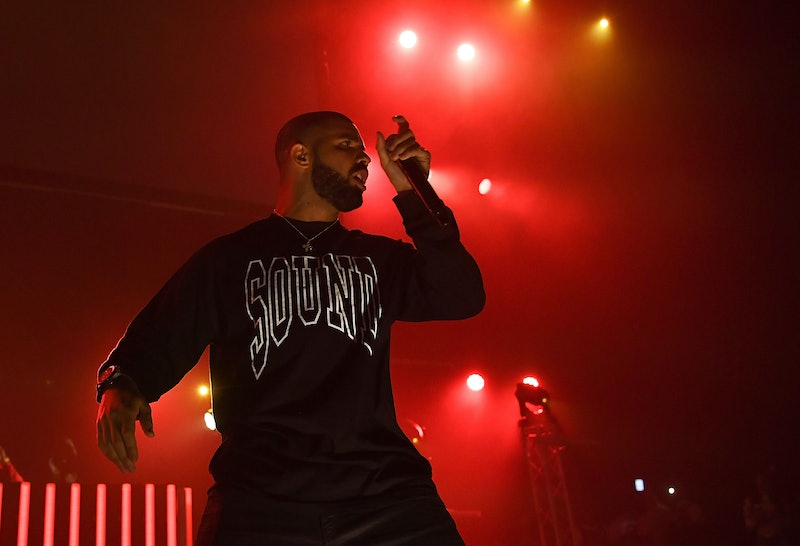 For years, Kanye West and Drake have been music collaborators, friends, frenemies, straight up enemies who diss each other's pools, and pretty much everything in between. Now, however, it looks like they might be back at being both friends and collaborators, as according to West, an upcoming Kanye and Drake mixtape is finally in the works. Thanks to West's appearance at Drake's OVO Fest in Toronto on Monday night, the world is abuzz with news that a Kanye and Drake album might be nigh. And Yeezus wants to know if we're ready.

While on stage, Kanye performed some tracks from his latest album, Life of Pablo — “Father Stretch My Hands Pt. 1,” “Famous,” “Runaway,” and the two artist's most recent collaborative single, “Pop Style.” During the performances, Kanye asked the crowd, "Are you all ready for this album?" He then clarified, adding: "Now, I'm not talking about Pablo. I wasn't talking about Views. I wanna ask y'all right now, y'all ready for this album?"

Two things: First, yes, obviously we are ready for the greatest album of our time, is that even a question? Second, are you sure, 'Ye? Both you and Drake have mentioned doing an album together for over a year now. Who's to say it will actually get released? Can we count on this happening for reals now? Let's look at a timeline of events regarding the elusive Drake/Yeezy album and discuss. What a time to be alive.

After years of a back and forth rivalry, Yeezy showed up to Drake's co-headlined NBA All-Star Weekend concert. The two performed together on stage, giving us a taste of what a collab album might sound like — and showing the world that they do in fact support one another.

Even before Yeezus's The Life of Pablo dropped, the artist told the Breakfast Club that the track "Wolves" was partly inspired by Drake. He said, "The ‘Wolves’ song came from a conversation that me and Drake had, when was gonna do an album together, and the album was called Wolves."

Drake introduced Kanye on stage as one of his idols. The two appear to be buddies. Buddies make albums together.

After speaking highly of Kanye, Drake told Zane Lowe during his OVO Sound Radio interview, "We had plans, we were supposed to do a mixtape together, album together, so maybe we'll get that done."

On Twitter (of course), West pined for the acquisition of Tidal. The Life of Pablo creator Tweeted, "Apple give Jay his check for Tidal now, and stop trying to act like you Steve." Why is this important, you ask? 'Ye is a partial owner of Jay-Z's streaming service Tidal, and Drake is one of Apple Music's spokespeople. Would a collab album between the two force Apple to buy Tidal? Seems like it could be a big ploy. We all know how much 'Ye likes to do business, so, if business is somehow involved with this collab album, it looks like it could actually be happening after all.