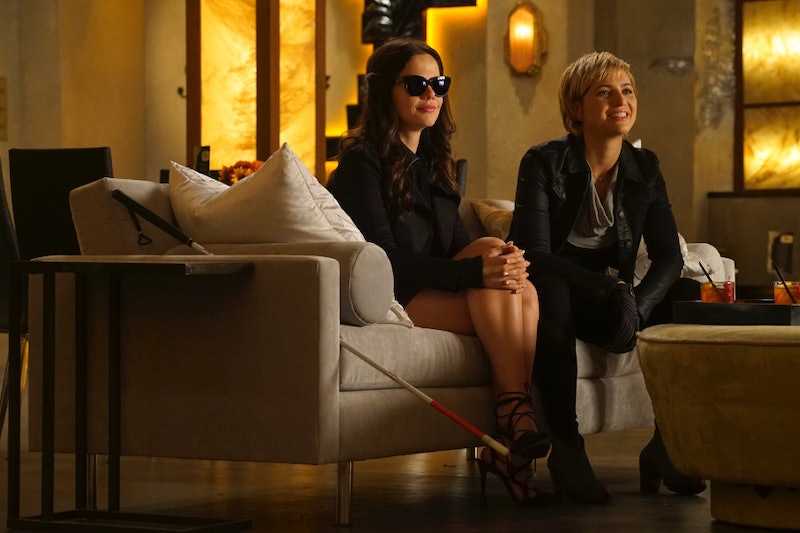 They say that "the enemy of my enemy is my friend," so it would come as no surprise if Jenna Marshall and Sara Harvey end up working together on Pretty Little Liars . After all, no two people have better reason to hate the Liars than them, considering everything they've been put through. But is there a chance this show could decide to take their relationship to another level? Could there ever come a time when Jenna and Sara start dating on Pretty Little Liars ? They share so much in common that it's definitely not out of the question, so I wouldn't be too quick to rule out the possibility.

For starters, they've both suffered severe injuries at the Liars' hands. In Jenna's case, they are the reason she went blind and as for Sara, well, her electrical accident was actually kind of her own fault due to her involvement with A, but the Liars didn't go back to help her, so there's still some definite resentment there — something that Jenna can more than relate to. And let's not forget that Jenna has a habit of becoming very close to the Liars' enemies, like the time she dated Shana Fring, who was then killed by Aria out of self defense. So basically, Jenna has a lot of reasons to hate the Liars and it's that mutual loathing that could bring Jenna and Sara even closer together.

The series left us with the cliffhanger of Noel Kahn's return a few weeks back, and while it's unclear if someone summoned him or if he came of his own volition, it sure looks like he's getting ready to team up with Jenna and Sara for some mysterious scheme they're drawing up. Between the two them, these ladies know a lot of secrets about the Liars. In fact, Jenna already suspects (or maybe even knows for sure at this point) that they had a hand in Dr. Rollins' disappearance. So just imagine what they'd be able to accomplish if they put their devious minds together. I doubt even Mona would be able to predict their next move.

But this isn't just about their mutual love of torturing the Liars. Even their personalities are similar. Between those mysterious smirks and sarcastic jabs, their chemistry is undeniable. And while I hate to think about what this romantic alliance could mean for the fate of our favorite Rosewood residents, I'd be lying if I said the idea of this pair up wasn't all sorts of intriguing. They may just give Uber A a run for their money.