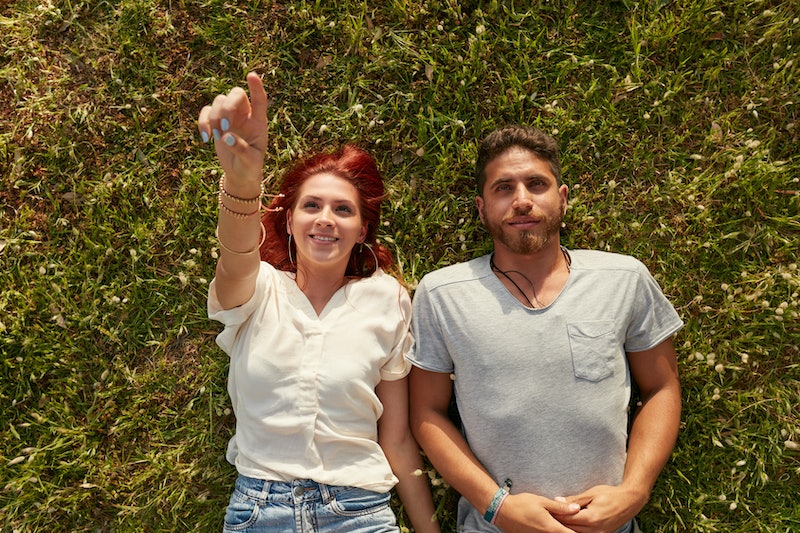 After a particularly hard breakup in college, my best friend Alanna said to me, “90 percent of relationships is timing.” And, unlike most things that I found deeply profound at age 19, this idea has stuck with me over the past decade. I’ve used it to console myself over loves that didn’t work out the way I wanted them too — “The timing just wasn’t right” — and I’ve repeated it over and over again to friends who were similarly heartbroken — “It’s all about timing.” And I’ve come to believe that Alanna was right: Timing is the number one thing that determines whether or not a relationship will last — but not for the reasons I thought at 19.

"To be in a successful relationship, you need, 1) the right person, and, 2) the right time,” dating and relationships coach Monica Parikh tells Bustle. And I agree, to a point, but let’s take a closer look at what we’re really saying when we talk about “the right time” in reference to romance.

There are four very different things that it can mean: 1) they’re just not that into you, 2) you’re on different life paths, 3) your paths finally converged, or 4) they really and truly cannot be in a relationship right now.

1. They're Just Not That Into You

Number one — they’re just not that into you but tell you that they’re “not dating” or “not ready” right now — falls into the category of “white lies we tell people in order to let them down easily.” While there are certainly periods in people’s lives when they’re truly not dating (see #3), more often than not the timing excuse is trotted out when someone thinks another person is cool, but just not cool enough. It’s what we say when the sex is good and the person is good looking but that spark is missing. It’s what we say instead of saying, “I’m sorry, I like looking at you naked, but you just don’t make my stomach jump when you walk into the room.”

The second thing that “the timing is wrong” can mean is that you and that person are just headed in different directions. Maybe you met and, two months later, he got a job across the country. Or maybe you’re really ready to get married in the next couple of years and she just got out of a five year relationship and wants to play around for a while. If you’re both adults with clear goals and trajectories, it can feel foolish to throw everything away for love.

“Additional schooling, jobs, end of long-term relationships all contribute to whether a relationship is going to succeed or not,” Janna Koretz, licensed psychologist, tells Bustle. “If you're dating someone who begins medical school in California and you're in New York with no foreseeable need or desire to move to the West Coast, then the relationship may not continue, despite the fact it could continue successfully under other environmental circumstances.”

3. You're Finally On The Same Path

Timing also comes into play for people who meet at one point in their lives, don’t have any romantic spark, and then meet up later and fall in love. Everyone seems to think this is some kind of crazy magic when it happens — they’ve been right in front of each other’s noses all along! — but really it’s just timing.

I see that a lot in my hometown, which is a place a lot of people leave in their twenties and then come back to when they’re ready to have babies. Suddenly, people who have known each other since they were kids are pairing off and everyone is like, “Wait, what?” Timing is absolutely at play in those circumstances: Two people with formerly disparate goals and trajectories are suddenly on the same path, think the other is sexually attractive, and decide to make a go of it. It’s not very romantic, sure, but it’s practical AF and definitely makes sense.

Anita A. Chlipala, LMFT, thinks that this has a lot to do with what people tell themselves about their current situation and circumstances. “For instance, I hear from men that they’re not ready for a relationship because they don’t think they’re making enough money as a provider,” Chlipala tells Bustle. “So if a guy thinks, ‘Women won’t want to be with me until I make enough money,’ he’s going to think the timing is off when really it’s his — possibly erroneous — belief that he needs to make a certain amount before he’s desirable to a woman.”

4. They Really Can't Be In A Relationship Right Now

The last circumstance I'm referring to when we say “timing is everything” is, I think, the most rare. While I truly believe that a lot of people will go to great lengths to make a relationship work, there are circumstances where it just can’t happen. Like say you meet the love of your life, but he’s happily married. Or you, I don’t know, fall in love with someone with terminal cancer. This is the stuff of tragic romantic movies or Shakespeare plays, though, more than the stuff of real life.

Because here’s the thing about this one: If you really, really dig each other? If you feel like this connection could be a true love connection? You figure out a way around those obstacles. So, yeah, “timing” is technically the reason things didn’t work out, but the bigger issue is that you weren’t into each other enough to make some pretty intense life sacrifices. And that’s OK — that’s a completely legitimate reason to not pursue a relationship.

“It was just the wrong time” is a comforting phrase because it feels so simple on the surface. It takes the responsibility for relationships working or failing out of the hands of the people in them and into the hands of some amalgam of fate and uncontrollable circumstances. That’s why we love to invoke “timing” when things go wrong instead of “I just didn’t love them enough” or “I’m choosing my career instead.” And you know what? That’s fine. “Timing” can continue to be the number one reason relationships fail — goodness knows breakups are hard enough as it is without everyone being 100 percent honest all of the time. All we need to do to make the timing cliche true is keep believing it.