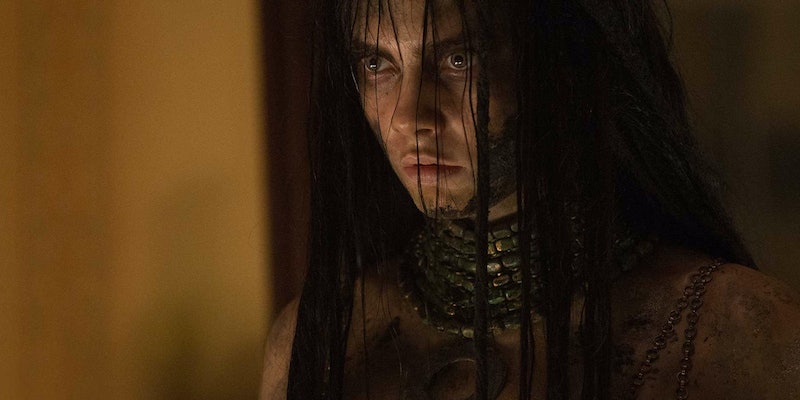 Suicide Squad is finally here, and with it comes a whole slew of new characters into the DC Expanded Universe. Batman v Superman introduced Batman, Wonder Woman, Lex Luthor, The Flash, and more to Superman's world, but Suicide Squad is definitely taking things to the next level. The titular squad itself has six criminal members, plus their leader and his bodyguard, along with wildcards like Enchantress and the Joker. It's a lot of characters to keep track of, so you may be wondering how the Suicide Squad members got their powers.

Surprisingly, most of the members of Suicide Squad don't actually have any powers. For the most part, they are a group of extremely dangerous and highly-trained criminals who are very good at what they do. The only member of the team who has any powers in the traditional sense is El Diablo, who can control and produce fire. Then there's pseudo-member Katana, who doesn't actually have any powers but does wield a magical sword. Meanwhile, Killer Croc is a difficult case to pin down, since his reptilian appearance and behavior are certainly not normal, but they're not necessarily powers either. And of course there's Enchantress, who isn't a member of the squad but is a 6,000-year-old witch with nearly limitless magic powers. But just because the rest of the cast don't have any superpowers, that doesn't mean they're useless. Here's a look at all the film's main players, what they can do, and how they came to be.

Floyd Lawton doesn't have any superhuman powers, but he's said to be the world's greatest marksman. Think Hawkeye from the Avengers, but bad and using guns instead of a bow and arrow. In the comics, his abusive father was attacking his brother, so Lawton attempted to shoot his father to intervene. However, he missed, and instead killed his sibling. This event led him to train as a marksman so that he would never miss again, and he became the world's deadliest assassin.

Harleen Quinzel's power is basically that she's crazy. Like, incredibly insane to the point where there's nothing she won't do. You can thank the Joker for this. She was originally the criminal's therapist, but he drove her mad and she lost her mind, fell in love with him, and turned to a life of crime. She's also pretty good with a baseball bat.

Waylon Jones was born with a genetic condition that gives him the appearance of a crocodile. He has thick, scaly skin, sharp teeth, and is very strong. He's also a cannibal, and lives underground in the sewers where he considers himself a king.

Australian Digger Harkness, like all Australians, has a thing for boomerangs. I kid, I kid... but he really does love boomerangs. He discovered he had a talent for making the unique weapons early in life, and eventually became so skilled with them that he decided to use them to aid in a career as a professional thief. It's worked out pretty well for him.

Christopher Weiss worked for a chemical company, where he developed a formula that made ropes as strong as steel. He became very skilled in using his super strong ropes for fighting (as one does), and became an assassin.

Chato Santana is a reformed Los Angeles gang member who's trying to go straight. He has the power of pyrokinesis, which he obtained in the comics from the original El Diablo, Lazarus Lane, which were in turn derived from a demon that used him as its host. In the film, the limits of Diablo's powers are unknown.

The government-assigned leader of the Squad, Flag has no powers. But he's a military veteran with superb tactical, fighting, leadership, and weapons skills.

Acting as Flag's bodyguard in the film, Tatsu Yamashiro's origin is perhaps the most tragic. She is a Japanese woman who was courted by two brothers, Takeo and Maseo. She married Maseo, as Takeo was a criminal. Takeo didn't take this well, and challenged Maseo to a duel over her hand. Takeo won, using a mystical sword called Soultaker that traps the souls of its victims (including Maseo's). Enraged at her husband's death, Tatsu then defeated Takeo and took Soultaker for herself. She then trained as a Samurai warrior and took on the identity of Katana, which she uses to fight crime as a vigilante.

The Joker's backstory is notoriously muddled, and no one really knows his origins. What is known is that he's a criminally insane homicidal maniac who hates Batman and has a warped sense of humor.

By far the most powerful character in the film, Dr. June Moon is an archaeologist who discovers a strange artifact in a castle that grants her the powers of the Enchantress. When she says "Enchantress," Moon turns into a 6,000-year-old witch who can teleport, shoot energy, manipulate matter, and pretty much just cause lots of trouble. The more Moon turns into Enchantress, the less control she has over the entity, which is definitely a cause for concern.

Suicide Squad has a lot of characters, and they all have wildly different backgrounds. While most of them don't have superpowers per se, together they might add up to the most diverse superhero movie cast ever. I'd say that qualifies as a pretty nifty superpower, wouldn't you?